Andrew Coyne
Published May 19, 2021 Updated May 19, 2021
For Subscribers
Comments
Text Size
Please log in to listen to this story. Also available in French and Mandarin. Log In Create Free Account

In his last piece before retirement, the veteran Montreal Gazette columnist Don Macpherson warned his English-speaking readers they were on their own.

Simply put, “we don’t count,” he told them. No political party, federal or provincial, is going to defend their rights. Not when they are outnumbered seven to one by the province’s French-speakers, and not when that majority has convinced itself that it is the endangered minority in the province.

Hence the great quiet that has descended upon Quebec in the wake of Bill 96, the Coalition Avenir Québec government’s draconian new language law, whose aim, whatever Premier François Legault’s dissembling (“it’s nothing against the English Quebeckers”), is to further harass and marginalize the province’s anglophone minority – in the name, as always, of assuring the “survival” of its francophone majority, or in the now-obligatory usage, the Quebec nation.

The bill would extend the restrictions on English contained in Bill 101 – the province’s existing assertion of franco-supremacy – to businesses with as few as 25 employees. It would not ban English altogether on commercial signs, as some hard-liners had hoped, but it restores the requirement of “marked predominance” for French, a phrase familiar from previous instalments of the language wars.

It would remove the right to offer bilingual services from some municipalities, cap enrolment at English-speaking CEGEP schools, force recent immigrants to communicate with the province exclusively in French and empower citizens to snitch to the government on businesses whose French-language service they found wanting.

Once, this sort of thing might have provoked at least a murmur of opposition here and there, on the principle that majorities should not be quite so open in their disdain for the minorities in their midst. Not any more. In part, this is a matter of precedent – what might once have been the occasion for outrage has long been sanctioned by custom. But in part it is the crude calculations of politics: There are no votes in anglo rights.

Who will defend Quebec’s anglos today? The provincial Liberals? They are too busy shoring up their nationalist credentials with francophone voters.

The federal Liberals? They’re keen to promote their new “asymmetric” approach to minority language rights, in which the federal role is apparently no longer to protect the rights of francophone and anglophone minorities alike across Canada, but rather to protect francophones outside Quebec and … francophones inside Quebec.

The courts? They might have, had the Legault government not taken the precaution of invoking the Constitution’s notwithstanding clause to shield the bill from judicial scrutiny. This, too, might once have been the occasion for outrage, if not in Quebec then in the rest of the country: recall the reaction when Robert Bourassa deployed it in 1988. But here, too, precedent has dulled our senses.

Having earlier invoked the clause with regard to Bill 21, and gotten away with it – a Quebec Superior Court judge last month found the legislation, which imposes an effective hiring bar on observant religious minorities across much of the public sector, was a gross violation of religious rights, only to wave it through helplessly – the Legault government seems likely to get away with it again. As before, it is not only the federal Charter of Rights and Freedoms it has thus neutered, but also Quebec’s own charter. Both are increasingly dead letters in the province.

The rationale for all this is supposed to be the alarming decline in the use of French in Quebec, a spectre whose acceptance is now as universal as its supporting evidence is lacking. Language statistics are notoriously easy to slice in ways favourable to one’s case, but however you slice the data it doesn’t add up to anything like the existential threat claimed.

The same has not been observed with respect to French usage. Standard indicators – language spoken most often at home, or at work – show no discernible trend, at roughly 82 and 87 per cent respectively. Perhaps most significantly, the share of Quebec’s population that can speak French – defined as the ability to carry on a conversation in the language – is at an all-time high, at about 95 per cent, almost 10 percentage points higher than it was 50 years ago.

But what is all that compared to a few anecdotes about shopkeepers chirping “bonjour-hi” to their customers on Sainte-Catherine Street? In the current demographic panic, anglos don’t count, and neither do facts. 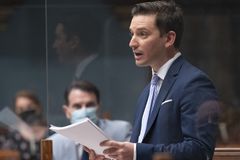