The decline of the Parti Québécois – and with it the threat of another sovereignty referendum – was supposed to free Quebec’s anglophones from the grips of the provincial Liberal Party that many believed had come to take their votes for granted. It hasn’t turned out that way.

Quebec anglos still voted massively for the Liberals in last October’s election, despite Coalition Avenir Québec Leader François Legault’s vow to never hold a sovereignty plebiscite. Nearly a year into his first term as Premier, Mr. Legault has kept to that promise. But the province’s English-speaking population feels betrayed, and under siege, in a myriad of other ways.

For starters, there’s Bill 21, the recently adopted secularism law that bans teachers (among other public employees in positions of authority) from wearing religious symbols. English school boards vow to flout the law, claiming a constitutional right to run their own schools.

Then there’s the move by Education Minister Jean-François Roberge to forcibly transfer two underoccupied English public schools in northeast Montreal to the area’s French-language board. Mr. Roberge announced the transfer in June – on French-language radio – without first informing the English Montreal School Board. That put the EMSB on the warpath. The board sought an injunction to block the move. It lost, a judge ruling that the French-language board would suffer a greater prejudice than the EMSB by blocking the school transfer.

The judge did not, however, rule on the constitutionality of Mr. Roberge’s move. The EMSB is seeking a judicial review based on Section 23 of the Charter of Rights and Freedoms, which guarantees minority-language populations across Canada control over their own schools.

The scope of Section 23 is subject to interpretation. But rarely has a Quebec government acted with such little regard for the historic rights of the province’s anglophones. Earlier this year, Mr. Roberge also transferred an English high school on Montreal’s West Island to the area’s French board over the protests of parents. The minister’s heavy-handedness has left a sour taste.

To be sure, enrolment in Quebec’s English-language public schools has been in decline for years. Since the adoption of Bill 101 in 1977, the children of immigrants must attend French-language schools. English schools have seen a constant erosion of their population base as anglophone high-school graduates leave the province. The province’s nine English boards now count about 85,000 elementary and high-school students, down about 20 per cent since 2000.

In northeast Montreal, the children of postwar Italian immigrants who attended English-language schools saw their rights grandfathered under Bill 101, enabling them to send their own kids to English schools. But they have gradually been outnumbered in the area by new immigrants. Indeed, northeast Montreal is now home to the Petit Maghreb neighbourhood, where the children of North African immigrants attend overcrowded French schools.

Still, Mr. Chambers argues that, while student numbers may be down, English-speaking communities atrophy when their schools close and students must travel out of their neighbourhoods. He is worried about the precedent the latest school transfer could set.

The EMSB’s current court case is just a warm-up act for the legal battle the English community vows to wage if the CAQ government moves ahead with its election promise to abolish school boards altogether. The CAQ sees boards as wasteful and dysfunctional. And while it might be right about that – the EMSB has been embroiled in infighting and faces a government audit over the way it awards contracts – it cannot simply wish away minority rights.

Leaders in the English community are gobsmacked by how cavalierly the CAQ government has treated them and their concerns. As with Bill 21, which Mr. Legault says is overwhelmingly supported by the province’s francophones, the CAQ government acts as if minority rights are of secondary importance. It governs, unapologetically, by and for the francophone majority.

Unlike the Liberal government, there are no anglophones in Mr. Legault’s cabinet. The Premier appointed himself as the Minister Responsible for Relations with Quebeckers of English Expression. But he declined an invitation to attend QCGN’s annual meeting. The Premier has designated MNA Christopher Skeete to serve as his liaison with the English-speaking community. But anglophone leaders remain unsatisfied with the arrangement.

The linguistic balance of power shifted long ago in Quebec from the province’s once wealthy and powerful English minority to its francophone majority. The province’s mother-tongue anglophones are proportionally fewer – numbering about 700,000, or about 9 per cent of the population – and wield far less economic weight than they used to. Their relative demographic decline has, hence, heightened the importance of controlling their schools.

They’re not about to let them go without a fight. 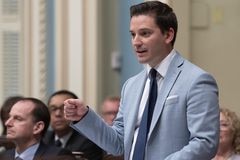 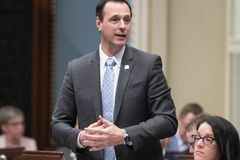 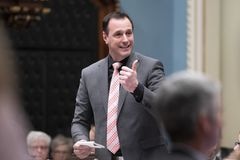