As the Parti Québécois turned 50 last week, there was every reason to wonder whether it would live long enough to fight the next election. After its worst showing ever in the Oct. 1 vote, the party founded to make Quebec a country looks more like a fringe movement than a political force.

Bad news for the PQ used to mean good news for the Quebec Liberal Party. As the federalist alternative to the Péquistes, the Liberals’ fortunes were long inversely tied to those of the PQ. That all changed with this election, the first since the PQ’s founding that did not revolve around the federalist-sovereigntist cleavage that had sustained the Liberal-PQ duopoly for four decades.

As a new Coalition Avenir Québec takes power on Thursday, the Liberals are facing existential questions of their own. At 151 years old, the QLP remains one of the most successful political franchises in the history of Western democracy. But after experiencing its worst defeat since Confederation, the party is a mess, holding only two seats outside the Greater Montreal area.

The QLP won almost 25 per cent of the popular vote, compared to the CAQ’s 37 per cent. But while the CAQ swept francophone Quebec almost everywhere off the island of Montreal, the Liberals won only about 12 per cent of the vote among French-speaking Quebeckers, according to a postelection poll by Léger Marketing. It finished fourth in 33 of 125 ridings, and behind the far-left Québec solidaire in more than 40. Humbling does not begin to describe such a clobbering.

With almost all of its 29 MNAs representing anglophone and allophone ridings on the island of Montreal, the QLP is now at risk of becoming the party of non-francophones, rather than the broad federalist coalition it had always been. Unless it can reconnect with francophone voters, it, too, might end up on the fringes. The next Liberal leadership race will be all about that threat.

Liberals are already twisting themselves into knots about how to rebuild. According to some, the QLP needs to beef up its nationalist credentials if it is to win back francophone Quebec. If this election proved anything, they say, it is that fading support for sovereignty does not mean French-speaking Quebeckers have become any less nationalistic. They continue to be intensely devoted to the protection of their language and culture. The CAQ’s unapologetic nationalism simply spoke to them more than the anti-nationalist talk of former Liberal premier Philippe Couillard.

For Alexandre Taillefer, the high-profile businessman who chaired the failed Liberal campaign, the QLP should start the rebuilding process by considering a compromise on the contentious issue of religious symbols in the public sector. Such a compromise, Mr. Taillefer said last week, would involve endorsing the recommendations of the 2008 Bouchard-Taylor commission that called for a ban on the wearing of religious symbols by state agents in a position of authority.

CAQ premier-designate François Legault has promised such a ban, going even further than Bouchard-Taylor’s recommendations by extending it to teachers, and not just police officers, prison guards and judges. He has even suggested he would invoke the Canadian Constitution’s notwithstanding clause in the event the Supreme Court were to strike down such a law.

The suggestion by Mr. Taillefer, who is considering running to replace Mr. Couillard in an eventual leadership race, drew a stiff rebuke from interim Liberal leader Pierre Arcand. That’s not surprising, since the Liberal caucus now consists almost entirely of MNAs from ridings in which linguistic and/or religious minorities make up a majority of the population. The mere suggestion of the Liberals compromising on minority rights is tantamount to heresy in their eyes.

“I ask my party to stay faithful to its values and above all not trade them off for a few votes,” Mr. Couillard said in announcing his departure from politics on Oct. 4. “Attempting to imitate our adversaries will not lead us to victory. The strength of our convictions will.”

That proposition now appears up for debate among many defeated Liberals. Mr. Couillard himself appeared to betray his own principles in passing Bill 62, which would prohibit Quebeckers from wearing face coverings when receiving or dispensing public services. (The law has yet to take effect amid a constitutional challenge). Some pragmatic Liberals suggest rallying to the Bouchard-Taylor consensus might be one way to defuse the issue once and for all.

The battle for the soul of the Quebec Liberal Party has begun. 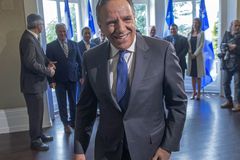 Globe editorial: With CAQ victory, Quebec steps away from its separatist past
Subscriber content
October 2, 2019 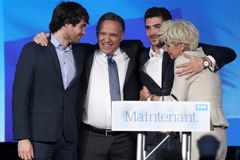