There were times during Donald Trump’s Fourth of July speech when I sat back from the TV, because I was so sure that lightning was going to strike him. Not actual lightning, though the skies were thunderous over Washington, D.C. No, I was sure he’d be struck by the metaphorical lightning cast down by a deity that does not particularly enjoy hypocrisy and lies.

There were so many moments for a wrathful deity to practice its throwing arm. Perhaps during the bit where the President, accused of sexual misconduct by at least 20 women, lauded the goals of women’s suffrage? Or the part where he sang the praises of the Super Bowl, despite having accused many professional football players of being unpatriotic and selfish and money-grubbing? Or the point when he praised the goals of civil rights activists, despite having perpetrated a long-standing racist lie about the birthplace of America’s first black president? Or possibly as he rhapsodized over the country’s natural beauty, although his administration has rolled back environmental protection, and refuses to take action on climate change.

Then he brought up Martin Luther King Jr., who had stood on the same steps of the Lincoln Memorial to talk about the day when people would be judged on the content of their character not the colour of their skin, and I looked for a non-conductive blanket to duck under. But there was no lightning cast down by a fed-up god. The Angel of Truth, painted on the walls inside the memorial, did not come to life to yell, “I’m sorry – what?” I suppose everyone deserves a holiday, although the Angel of Truth has not exactly been working overtime these days.

America has always been good at putting on a show on its birthday, but this year the show was Black Mirror. There was a façade, and behind it was a different and terrifying reality that largely went unacknowledged, even though everyone knew it was there. The President’s speech was judged presidential, measured and non-partisan, but only when judged by the crazypants standards set by his other speeches, in which lies and threats vie for supremacy.

“Trump calls bluff of critics in July 4 speech,” ran a headline on CNN, the President’s favourite punching-bag network. Because he read a speech from the teleprompter, and did not call for any of his opponents to be jailed, this was deemed a “presidential” moment. Never mind that Mr. Trump had earlier called Congressman Justin Amash, who has left the Republican Party over his lonely and principled criticism of the President, “dumb & disloyal … A total loser.” He wrote that himself, mere hours before he would read the words of some White House staffer, claiming “today we come together as one nation.”

Never mind that the President had spent the holiday insisting that Department of Justice lawyers find a way to get a citizenship question onto the 2020 census, a blatant attempt to influence the political system in favour of white Republican voters. That’s a version of “unity” unknown to my dictionary.

This blatant flim-flammery, this fraudulent whoop-de-doo, seems more and more to be a feature of the American political system, not a bug. Those gathered on Washington’s stunning National Mall wanted to be dazzled by the cool fighter jets overhead, awed by the fireworks, and warmed over the empty flames of nostalgia. Mr. Trump praised the Americans who had fought to liberate the country from tyranny, in the days when the tyrants lived outside its borders.

Maybe those people on the Mall, holding their kids’ hands and telling them they’d get ice cream later, shh, the President is talking, maybe they didn’t think about the shadow that was creeping over their own country. Perhaps they didn’t want to think about other people’s kids crammed into cages on the borders, in fetid conditions that the government’s own inspectors call “dangerously overcrowded.” It’s a holiday, after all. The only concentration camps folks want to think about are the ones that were liberated by clean-cut GIs, not the ones turning a profit on the southern border.

There was no angry deity to send a message via lightning. Abraham Lincoln, who pleaded for “the better angels of our nature” didn’t leave his stone perch, though he might have wished he could clap hands over ears. Help isn’t coming from above; it has to come from the crowd itself.

The amazing thing is that those better angels were on display earlier in the day in Washington, before the corporatocracy of Republican donors filed in to clap each other on the back. The National Independence Day parade filled the streets with America at its best: there were majorettes and muscle cars and an all-girl roller derby troupe, a giant inflated Uncle Sam that dragged its feet, and so many marching bands that every high school in the nation seemed to have sent one. It was goofy, corny, inclusive, delightful. There was not a tank in sight.

The tanks were displayed over by the President’s podium, and by the time he took to the stage, the skies had darkened both literally and figuratively. As I watched his speech on TV, a friend came to visit, a Canadian who has lived for two decades in the United States. We talked about a report in the Washington Post that revealed the administration had considered paying for Mr. Trump’s party by cutting funding to parks in liberal states like California. “The American empire is collapsing,” my friend said.

On TV, the President was talking about how the future belonged to America. The people in the crowd believed him, or wanted to, and cheered. Then the teleprompter went dark, and everyone turned to the fireworks above. 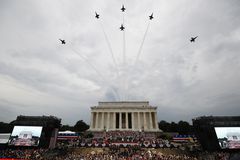 Trump asks Americans to ‘stay true to our cause’ during Fourth of July commemoration
July 4, 2019 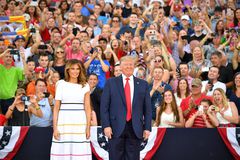 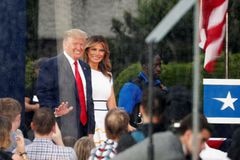