Danielle Taschereau Mamers is a SSHRC postdoctoral scholar at McMaster University, where she researches and teaches on settler colonialism, decolonization, and environmental politics. Her research and writing is available at https://www.dtmwrites.com/

It’s a cold March morning and I am putting off responding to e-mails by flipping through articles online. One is a press release announcing a progress report on reconciliation in Canada. The authors of the report found the Government of Canada had completed just eight of the 94 Truth and Reconciliation Commission’s Calls to Action. I’m disappointed at how little has been accomplished in five years. And then I scold myself. You should know better, I think. You know enough history to expect this.

Then, I come across some good news: 21 bison had been reintroduced to Poundmaker Cree Nation in western Saskatchewan. Obviously this is not substantive decolonial justice, but I recall the TRC final report, where the commissioners wrote that “reconciliation will never occur unless we are also reconciled with the earth.” The news article does not mention still continuing colonial violence or the difficulties of decolonization, but it does describe bison as part of broader cultural and language revitalization projects, and how the herd will nourish the Indigenous community — both literally and spiritually. Elder Floyd Favel from Poundmaker described the herd’s historic return after a 150 absence as “a very spiritual feeling of completion.”

The return of the bison raises questions of where they went in the first place. The simple answer is that these animals did not merely disappear, but were hunted to near-extinction by white settlers, spurred by growing markets for bones and hides and colonial desires to destabilize Indigenous nations by decimating a species central to all aspects of plains life. The land had been transformed from open ranges into fenced farms, while Poundmaker and other Indigenous nations were forced to live without bison (a source of material, cultural and spiritual sustenance) for more than a century. When the last free-ranging bison in North America were purchased by the Canadian government and brought to live in confinement in national parks — first to Buffalo National Park and later to Elk Island National Park — it was an exercise of colonial power that divided up the world in order to remake it.

As I look at the article’s photographs of bison making their way out of shipping containers, through chutes, and onto open fields of Poundmaker territory, I feel like I am looking at the negatives of much older photographs. More than a century ago, the last wild bison in North America were rounded up on Blackfeet territory in Montana, loaded through chutes, and onto trains bound for Alberta.

The containers now are different — they are metal crates fitted for semi-trucks, rather than wooden train cars — but the bison look the same. They aren’t, of course. These returning bison were born under the watchful eye of biologists, in the confines of a national park. Their blood and tissues have been sampled, screened for diseases common to bison and other ungulates such as elk and deer. Their genes have been studied and declared “pure,” meaning their ancestors were kept away from breeding experiments to make cattle better suited to the harsh conditions of the northern plains.

The land the bison are returning to has also changed. Treaties signed in their wake were used by the Crown to acquire and sell land to arriving settlers and to confine Indigenous nations to smaller and smaller reserves. Settler colonization brought people from one country to another, displacing and destroying existing communities to create new ones. It also transformed the land itself, replacing flora and fauna with species from elsewhere. Bison, beaver and cod were hunted to the brink of extinction, leaving radically destabilized ecosystems.

In the prairies, where I grew up as a white settler, transformation meant parceling land into private farms, establishing towns that approximated European farming villages, building railways and roads to connect farmers to markets, and more recently, remaking land over again into places oriented around oil, gas, potash and other extractive industries. All of this remaking was possible because wild bison herds had been exterminated, an incalculable loss to plains Indigenous nations and to the ecosystem.

Reintroducing bison is not about returning to the past. It is the possibility of creation in the future, of making life in scarred landscapes. When bison are present, they hold together a world of relations. Their grazing habits impact plant diversity, their wallowing creates temporary habitats for spadefoot toads, their fur offers material for nesting birds, and their dung supports a whole world of beetles and worms that in turn feed other creatures. The bison that have arrived at Poundmaker Cree Nation, much like the bison who have been reintroduced to other Indigenous territories in recent years, will make new relations. They won’t bring back what has been lost in their absence, but they can be a model for new beginnings on landscapes that have been changed and between human and non-human beings who have survived those changes.

Decolonial justice is a much bigger project, which requires at minimum honouring treaties, returning land, and ensuring safe drinking water and adequate housing and health care in Indigenous communities. It requires redress for the thousands of children stolen from their families. Reconciliation requires action on these fronts, and on many more. But bringing back bison is an effort to heal relationships and between animals and the land, and rebuilding the connection between humans and bison.

The Poundmaker reintroduction included sweetgrass burning and a drum circle that welcomed the animals with ceremony. It is important that the process was a collaboration between Cree leaders, Parks Canada, and other Indigenous nations, many of which are signatories to the Buffalo Treaty — an Indigenous-led vision for bison restoration organized by Leroy Little Bear, Amethyst First Rider, Paulette Fox, and other Kainai First Nation elders and community members. Living together in a good way — in a better way than settlers have made possible — can begin with bison and with finding the resources and building the relationships necessary to support their return.

Thinking about reconciliation with the land is not a nostalgic suggestion that believes that returns to a verdant past are desirable — or possible. Rather, it is a way of materializing decolonial justice in communities and places violently disrupted by settler colonization.

The bison are back in town: For this Cree nation, cultural renewal comes thundering home
March 9, 2021 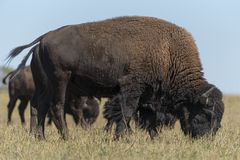