Ignore religion, and you ignore peace. That truth applies personally and globally, even if it irritates some secular-minded observers.

A horrible Easter Sunday tragedy in Sri Lanka offers a case study. On Apr. 21, eight bombs ripped through churches, luxury hotels and housing complexes in and around Colombo, their ignited fuses dipped in religious division, and shattered a country still recovering from a vicious ethnic war against the terrorist Tamil Tigers (LTTE) that ended just 10 years ago. Less widely known, for 11 successive Sundays prior to this tragedy, Christian churches in Sri Lanka had been disrupted in varying degrees of attack.

Still, the families of the 253 people who died on Apr. 21 are now clinging to the supports that religion puts in place around trauma. I went to witness the recovery process and saw Christians, Muslims, Buddhists and Hindus, all working in love and sacrificial care around victims, providing money, health care and long-term planning. But I also saw a Christian pastor reacting to an inch-thick collection of neighbourhood petitions that he should not rebuild a bombed church, the result of fear over religious conversion. Here was the good and the ugly of religion, in stark contrast.

As more information emerged about the massacre, things got even uglier. The Islamic State (IS) claimed responsibility for the murderous attacks. The nine young Muslims who strapped themselves with bombs were well-educated and from financially stable families, and were allegedly inspired by Zahran Hashim, a 34-year-old radical imam from the coastal town of Kattankudy.

Terrorism scholar Amarnath Amarasingam has surmised that IS, in an effort to expand its reach, readily preyed on local grievances against other religions to inspire the bombers. “We all knew of him, he attacked us all, it’s a cult that has greatly set back harmony,” said Seyed Ali Zahir Moulana, a local Muslim member of parliament who showed us sites during our visit that may have inspired Mr. Hashim: a mosque near Kattankudy where, in 1990, the LTTE massacred 140 Muslims praying, and another mosque in nearby Eravur, where 122 Muslims were slaughtered as they slept, children among them.

And now, Mr. Moulana is among the eight Muslim parliamentarians who resigned cabinet portfolios to appease Buddhist hardliners after the Easter bombings. Niqabs and burkas have been banned across Sri Lanka.

Sri Lanka is constitutionally a Buddhist country, with a Buddhist prime minister and president, and its citizens believe Buddha gave the country to his followers. The Bodu Bala Sena, or Buddhist Power Army, utilizes supremacy and violence for political gain. Hindus make up about 15 per cent of the country, and Muslims and Christians each comprise close to 10 per cent. The two main ethnic groups, Sinhalese and Tamil, span across all religions, and conversions across faith groups multiply on the family tree.

So it’s little surprise that amid an attack that drew hard lines across this complex web of faiths, ethnicity and politics, Sri Lanka is on edge, with armed military manning checkpoints throughout the country. After all, even though war-crime investigations continue into how the country was consumed by terrorism and war, many historians seem to agree that the conflict was seeded when British colonial powers “simplified” Sri Lanka into one ruling identity – the Sinhalese – which discriminated against Tamils.

Sri Lankans are heading into a national election, but given the current tensions, all indications suggest that political leaders are prepared to use religious identities to attract votes, which will invariably sow division that will spill into local harassment of “the other.” Campaigning is already under way and many have taken a hard line against those outside the majority.

Which brings us back to the very personal work of religion for peace. Loving neighbours differently than ourselves can be hard work, and it takes good teaching. What you learn in your religion will deeply affect your ability to love, forgive, persevere and work for a better tomorrow. Religion is private fuel for a public life of love, respect and equality. But politicizing religious differences is what fuels hatred, division and even bombings.

It’s a good reminder that what we hold in Canada so delicately is a sense that religious identities are not invisible – in fact, they shape us deeply. But they are not to be politically manipulated for governmental power.

Good religious engagement covers what government cannot. It teaches us how to love, the rationale to forgive, and the ethics required to be simply good people who care for the vulnerable and repair the wounded. There is much education to be done in Sri Lanka – and well beyond – on that count. 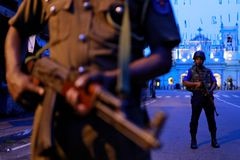