James Cleland Richardson was one of the many young men from the Vancouver area who heeded the call to fight for Canada and for freedom in the Great War of 1914-18. In those days, recruitment for military service in the Vancouver area was centred around the old courthouse that once stood on Vancouver’s Hastings Street.

James played the bagpipes and served in the cadet corps of a Vancouver unit (the Seaforth Highlanders), which had a prominent pipe band. He volunteered for active military service with the Canadian Expeditionary Force and soon after found himself on European soil engulfed in the horrors of the Battle of the Somme – a battle in which more than half a million allied soldiers were killed or wounded.

James was one of those killed in action during that battle. He performed so heroically that he was posthumously awarded the Victoria Cross – the highest award for bravery and gallantry that a British or Commonwealth soldier can receive.

But now flash forward more than 100 years to 2019 and imagine, just for a moment, that James Cleland Richardson were to return for a day to where it all began – to that spot on Hastings Street where the call was issued for young men to fight for Canada and freedom. What might he see and think? What questions might come to his mind and what conclusions might he reach?

Today, standing on Hastings Street where the old courthouse once stood, he would see in its place the Victory Square Cenotaph – a grey, three-sided, granite obelisk 30 feet high adorned with Canadian flags. Surely this would encourage him.

But as he watched the self-absorbed young people with their cellphones lounging on the steps of Victory Square, might he wonder whether they know or care anything at all about what he and his companions did or sacrificed? Were the deeds and names of him and his companions mentioned in any way during the schooling of these young people? If they were called upon to make some major sacrifice for freedom or for Canada, how would they respond? Would they respond at all?

The answers to these questions might trouble James, but not nearly as much as what he would see if he were to continue to walk east down Hastings Street from the cenotaph. A street strewn with garbage, with homeless people sprawled in doorways and alleys, begging from passersby; mentally ill people wandering aimlessly about and scores of human beings addicted to everything from alcohol to opioids; drug peddlers, sex-trade hustlers, black-market racketeers and other unscrupulous entrepreneurs all prowling Hastings in search of prey.

Might not such a sight – in the very shadow of the Victory Square Cenotaph – cause him to ask, “Was this what I and my companions sacrificed our lives for? Has the freedom we purchased at the cost of our lives become for many the freedom to destroy their lives? Are these people the casualties of their own choices or the hapless victims of some war I and my generation know nothing about?”

How would we answer James Cleland Richardson if he were to put these questions to us? How would the successors to the federal, provincial and municipal dignitaries, who spoke of the value of freedom and self-sacrifice at the dedication of the Victoria Square Cenotaph, answer such questions?

And how would we answer if James were to propose a response to the tragedy of Hastings Street – perhaps the only response that his wartime experience would suggest to him?

What if he were to say: “In the midst of the terrible trench warfare of the Battle of the Somme, the unsung angels of mercy who brought us what comfort and relief they could were the stretcher bearers.

“They came, hazarding their own lives, to where we lay wounded. They dragged us back from no man’s land to shelter. They gave us water and bandaged our wounds as best they could. The chaplains gave us spiritual comfort as we learned to our surprise that dying is a spiritual as well as a physical ordeal. And if, in our pain and delirium, we begged to be left alone to die, these angels of mercy disregarded our pleas as they carried us back from the front lines to comparative safety.

“So where,” he might ask, “are the stretcher bearers of Hastings Street?”

In 2019, that would mean where are the medics, shelter providers, social workers, addiction counsellors, chaplains and other helpers – not in small numbers with inadequate resources, but in the numbers and with the resources actually sufficient to clear the battlefield? And what should be their response to the wounded of Hastings Street who, in their pain and delirium, insist on being left alone?

As individuals and as a society, are not these questions we should seek to answer and respond to as we honour the memory and self sacrifice of James Cleland Richardson and others like him this Remembrance Day? 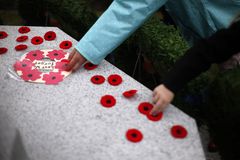 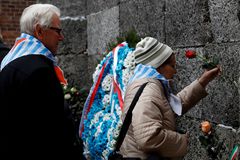 Canadians mark solemn Remembrance Day in Ottawa and other cities