John Dann is an artist with studios in Vancouver and Italy.

I was surprised to learn a few days before the event that the statue I made in 1981 of Sir John A. Macdonald was to be removed from its place before Victoria city hall where it had stood since 1982. Neither I, nor the Sir John A. Macdonald Society of B.C., which had commissioned the sculpture, had been consulted or notified. I have spent much of the past five years in Italy and I do not stay current on all issues. I was completely unaware that there was a controversy around this piece of bronze.

I was not, in 1981, nor am I now, one who thinks we should put anyone on a pedestal. The society backed my notion of making a portrait of the man, not an image of an idol. Indeed, the piece was conceived without a pedestal and it was placed in a somewhat enclosed space that facilitated an intimacy with it. One could observe it and relate to it if one chose. It was accessible. It did not aggrandize the man, but was a reflection of his humanity, on our shared humanity, with all its strengths, weaknesses, confidence and insecurities. As with many, Sir John A. Macdonald was a very complex human.

I did not base my work on his political accomplishments or failures. I based it on my study of his physiognomy. Because it is a full figure, I was also able to incorporate the free forms of drapery and the stance of the figure to give presence and expression to the piece. The work is both turbulent and calm, both strident and vulnerable. It works as a work of art.

A work of art at its best brings together diametrically opposing elements into a cohesive whole. Think for a moment about a favorite piece of music, or a painting where opposites live both apart and together to make a whole. Darkness/light, soaring and sinking, mountains and deep caverns, love/hate, tragedy/comedy; life is a dichotomy and so is art at its core.

Indeed, this controversy surrounding John Macdonald has two opposing sides. Sir John A. as the founder of a nation and Sir John A. as image of the colonial tyrant. But, of course, he was not completely either of these; he was a human at a given time in history who made decisions and followed the norms of the day as neither hero nor tyrant.

I am well aware of the horrors of the colonization of the Americas, Africa, Australia, India, and other parts of the world. Over 300-plus years, many millions of Indigenous peoples were considered less than human, they were cruelly slaughtered, their lands stolen and their cultures destroyed. Those who committed these acts of conquest and enslavement did so with a clear conscience. There was untold wealth to be had for the taking. The attitude can be summed in a letter written by an early settler on the east coast of North America. As he sailed by the many villages of Indigenous people, he wrote to England to say that the land was completely uninhabited. He did not see the natives as people.

This was the accepted thinking of the time, backed by government and church alike. In their opinion, at best, they were “savages” since they had not “God,” awareness of their “wealth,” nor the sense or ability to exploit it.

When Sir John A. Macdonald called Indigenous people “savages” and said he wanted all to be assimilated, his views were not unusual; nor were these desires unique to Canada. In Scotland, his birth nation, several hundred thousand children were being put into schools where they were forbidden from speaking their native tongue. That the residential schools in Canada lasted almost 100 years and inflicted horrific abuse on all who attended and, in thousands of cases, death is a dishonour and a blemish on our country and on every prime minister during that time – more so on those who continued the system after the abuses should have been well known, than on those who oversaw their creation. If Sir John A. Macdonald is to be vilified, then so must every other prime minister until Stephen Harper, for all supported or condoned these houses of iniquity. It is a part of the legacy of all prime ministers, premiers and politicians for most of our short history as a nation.

It is small wonder that those who experienced these institutions of horror or are their descendants, should wish to express their anger, sorrow, pain and loss of dignity by attacking images of our colonial past. Colonialism brought great wealth to many, devastation to so many others. How can anyone blame them? I would prefer to see discussion rather than iconoclasm. Understanding, rather than vilification. Shared sorrow rather than accusation.

For this reason I find Victoria mayor Lisa Helps' actions precipitous and misguided, for they were done in secret, hurriedly (in the span of 10 days), arbitrarily and undemocratically. If the tearing down of my sculpture is the best way to move forward, then I am all for it, but I cannot believe that any rational person who has reflected on our history can really think that removing about 150 kilos of bronze from view is going to change our history, or help us understand it better.

And there’s the rub, as Shakespeare might say. We need to understand our history, we need to acknowledge the misery wrought by colonialism and the continuing suffering it caused. Might it be that, if that took place, my sculpture might then be viewed as representing not the oppressor, but as the human, the humanity in us all, sharing the shame and sorrow and requesting forgiveness?

So far, this discussion and coming-together is not happening. The mayor’s action has cemented people’s positions, sides are taken, accusations are bandied, political points are made. Personally, I would love to be part of the discussion and, if possible, part of a solution.

I recently saw a movie called Kayak to Klemtu by Zoe Leigh Hopkins about a young girl maturing and discovering her Indigenous culture and her responsibilities to the land. We all need to take this journey. We need to acknowledge what colonialism and capitalism has done and continues to do in the interests of wealth. Our planet is close to a danger point. We have polluted the air, the water, scarred the land and decimated many living species. We need to rediscover and become one with nature and with each other. This is a noble goal all Canadians can share. 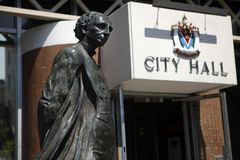