Gary MasonNational affairs columnist
Published May 15, 2020 Updated May 15, 2020
For Subscribers
Comments
Please log in to listen to this story. Also available in French and Mandarin. Log In Create Free Account

In March, 2017, a Globe and Mail investigation detailed how fundraising provisions of B.C.’s Election Act were being circumvented by lobbyists and others to disguise the real source of their donations – a tactic in clear contravention of the law.

The RCMP were almost instantly called in to investigate. A special prosecutor, David Butcher, was named to oversee the case.

Well, more than three years later we have the conclusion of this effort: no crime worth prosecuting here. Or at least, “no substantial likelihood of conviction” for violations of the Election Act, according to a report released by Mr. Butcher this week.

Yet at the same time, according to the special prosecutor, the RCMP felt that “where violations have occurred,” it was not “in the public interest to pursue a prosecution, as the cost of doing so would be disproportionate to the value of the donations under investigation.”

As I read that, the RCMP believe laws were broken – as The Globe clearly detailed – but the money involved was so minuscule in nature that it was not worth the hassle of pursuing the matter in court.

Boy, if all potential crimes were judged on that basis, there would be a lot of petty thieves who would have never seen the inside of a courtroom.

It should be said that after The Globe story, the BC Liberals returned $174,313 in donations dating back to 2010 – more than half of which were deemed prohibited donations – and the NDP returned $10,500. I guess everyone has their own definition as to what classifies as small err when it comes to determining whether to press onward to trial.

I have a couple of problems with the conclusion of this investigation.

The first one is the insinuation by Mr. Butcher in his report that there really wasn’t much of a story here to begin with. Or, as he put it, there was no information to support the “broad allegations made in the media” that there was a “significant volume or pattern of [illegal] donations.”

He also said the police noted that the lobbyists “quickly filed corrections” with Elections BC once the error of their donation ways became public knowledge.

The fact is, the errors of their ways became known to some of these lobbyists when reporter Kathy Tomlinson interviewed them. However, all but one didn’t contact Elections BC right away. They waited until after the story was published, at least a week later, and it became a scandal.

There is no question, in my mind, that laws were broken here. And no one should even begin to suggest otherwise. It’s also wrong to play down the matter, or to intimate in any way that it wasn’t a big deal because we weren’t talking about millions of dollars. That misses the point completely. Election finance laws, such as they were at the time, were violated and those who did the violating won’t face any consequences. That’s the bottom line.

But the other problem I have is the length of time it has taken to reach this conclusion. Three years? Seriously? That’s ridiculous. The RCMP took two years to complete their investigation, delivering their report to Mr. Butcher last August. And it’s taken this long for Mr. Butcher to declare that it’s time to move on from the issue.

And how many hundreds of thousands of dollars were spent in the process? I know Mr. Butcher doesn’t come cheap. Between 2012 and 2019, his law corporation has been paid nearly $1-million by the government.

If there is any solace to be taken from this decision, it’s that the landscape has changed dramatically since The Globe began reporting three years ago on a range of problems pertaining to political fundraising in the province. B.C. was dubbed “the Wild West” of campaign financing for a reason – there were very few laws governing it. Now there are, thanks to the New Democratic Party government.

Still, it’s an area of politics that needs to be monitored with steadfast vigilance. That’s why people such as Duff Conacher, co-founder of Democracy Watch, are so disappointed in the conclusion reached by both the RCMP and Mr. Butcher.

“In situations like this, where a rule in a law has not been drawn clearly in past court rulings, prosecutors should generally prosecute when there is evidence of a violation and let the courts decide whether the accused has crossed the line,” Mr. Conacher said.

By failing to prosecute, he continued, the prosecutor has let the alleged violators off the hook and blocked the courts from ruling on their highly questionable activities. 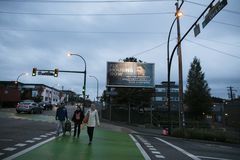 Close loophole for 'hidden' election donations, citizen group says
April 23, 2001
Follow Gary Mason on Twitter @garymasonglobe
Report an error Editorial code of conduct
Due to technical reasons, we have temporarily removed commenting from our articles. We hope to have this fixed soon. Thank you for your patience. If you are looking to give feedback on our new site, please send it along to feedback@globeandmail.com. If you want to write a letter to the editor, please forward to letters@globeandmail.com.
Comments