It was the Charter of Rights and Freedoms in 1982 that brought the Supreme Court of Canada – and judicial independence – to the public’s attention, and introduced it to a uniquely Canadian justice vision, a vision that took the status quo as the beginning of the conversation, not the answer. The Charter both represented and created shared and unifying national values. The judges on the Supreme Court of Canada in the eighties, when the Charter was first enacted were bold and fearless. So much so that as a result of their leadership, one of Canada’s leading exports today is her justice system, its rights jurisprudence and the independent stature of its judiciary.

Not surprisingly, our constitutionalization of rights was not without controversy. If, as Isaiah Berlin once observed, there’s no pearl without some irritation in the oyster, by the nineties there were those who saw the Charter as a whole pearl necklace. As for the judges, they understood that controversy was inevitable, but they also understood that one person’s controversy may be another person’s remedy. So they embraced controversy and forged ahead.

And out of the ashes of controversy, the Supreme Court developed a robust new justice consensus for Canada. Where for others pluralism and diversity are fragmenting magnets, for Canada they are unifying. Where for others assimilation is the social goal, for us it represents the inequitable obliteration of the identities that define us. Where for others treating everyone the same is the dominant governing principle, for us it takes its place alongside the principle that treating everyone the same can result in ignoring the differences that need to be respected if we are to be a truly inclusive society.

Integration based on difference, equality based on inclusion despite difference and compassion based on respect and fairness: These are the principles that now form the moral core of Canadian national values, the values that have made us the most successful practitioners of multiculturalism in the world, and the values that make our national justice context democratically vibrant and principled.

All this came from the Supreme Court, all this came to be understood by the public as being properly within the domain of the Supreme Court and, most notably, all this was, on the whole, respected and accepted by the legislatures. Criticisms and questions were of course raised, but usually with civility. And the Court’s integrity was never seriously publicly questioned. We have, in other words, been very lucky … so far.

What have I learned about judicial independence from Canada’s experience? I learned that democracy is strengthened in direct proportion to the strength of rights protection and an independent judiciary, and that injustice is strengthened in direct proportion to their absence. A Supreme Court must be independent because it is the final adjudicator of which contested values in a society should triumph. In a polarized society, it is especially crucial to have an institution whose only mandate is to protect the rule of law.

It is the media’s job to gather and disseminate the information we need to participate in the public conversations that lead to deciding whom to elect – or defeat; it is the legislature’s job to take the public’s pulse and decide which of its opinions to implement as public policy; and it is the Court’s job to decide how best to protect democracy’s core values, regardless of public opinion. Only Courts are not entitled to abandon their commitment to those core values – human rights, freedom of expression, freedom of the press and protection of woman and minorities, among others. Those are the values a Supreme Court has in its tool kit, and those are the values it must protect as it grapples with some of society’s most complex issues, such as the relationship between state power, rights and public safety; the relationship between minority rights and majoritarian expectations; or the relationship between religious demands and secular beliefs. These are the kinds of challenges that attract intense public scrutiny, and they are the kinds of issues that cannot be decided – or be seen to be decided – without a fiercely independent judiciary. They are also the kinds of decisions that define a nation’s values and, in defining its values, define not only its identity, but also its soul.

Many countries around the world are having existential crises over their national identities. They have made Faustian bargains, selling their democratic souls in exchange for populist approval. Their humanity has been the victim. So have their minorities. So have human rights. This, to me, is unconscionable.

I was born in 1946 in a German displaced-person’s camp to Holocaust survivors right after the Second World War. That was the devastating war that inspired the nations of the world to unite in democratic solidarity and commit themselves to the promotion and protection of values designed to prevent a repetition of the war’s unimaginable human-rights abuses. That’s why we had the Nuremberg Trials, the Universal Declaration of Human Rights and Israel’s Declaration of Independence. Yet here we are in 2018, seven decades later, watching that wonderful democratic consensus fragment all over the world, shattered by polarizing insensitivity; an unhealthy tolerance for intolerance; a cavalier indifference to equality; a deliberate amnesia about the instruments and values of democracy that are no less crucial than elections; and a shocking disrespect for the borders between power and its independent adjudicators, like the courts, who are made to choose between independence, ideological compliance, and survival.

Israel is having its own existential crisis and, with respect, the humanity of its soul is at risk unless the country understands that it cannot survive as the vibrant and complicated democracy that bloomed out of the desert 70 years ago without fiercely protecting the independence of its 70-year-old Supreme Court.

What is putting this at risk? The deliberate attempts to undermine public confidence in the Court’s integrity; the unforgivable sacrificing of the Court’s international reputation on the altar of partisanship; the hyperbolic rhetoric of hate that greets unpopular decisions; the menacing volley of simplistic pejorative labels, like “unpatriotic,” that too often replace mature debate; the demeaning of human rights by trivializing it as a weakness of the “left,” whatever that means, instead of recognizing that human rights is essential to the health of the whole political spectrum. All this is corrosive not only of the Israeli judiciary’s independence, but of Israel’s democracy.

Why is this any of my business? Because an attack on the independence of a court anywhere is an attack on all courts. It is not only my business as a judge, it is my business as a citizen of the world, a world I grew up thinking would be based on a commitment to human rights. But I am not the judge who matters. Israel’s most important judge is history, and history’s judgment is based not only on a country’s survival, but on its character and the values it represents and promotes. 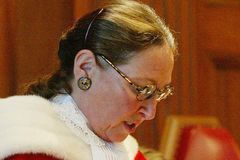