Hasanatu Barrie and HuSainatu Barrie are recent graduates of Toronto’s Westview Centennial Secondary School and will be attending university in the fall. Jamil Jivani is a lawyer and the author of Why Young Men: Rage, Race and the Crisis of Identity.

For years, Canadians have been willing to accept a base level of gun violence in our country without demanding action from people in power. So long as the number of victims stays at a certain level and gunshots are mostly contained to “problematic” neighbourhoods, Canada’s politicians fail to act with urgency or desperation. However, once gun violence increases to a certain point or spills into busy downtown areas, as has happened this year in Toronto, our country’s decision-makers move swiftly to try to stop the violence.

We – two recent high-school graduates and a lawyer who have seen violence and the justice system up close while living, studying and working in Toronto’s Jane and Finch community – believe that what’s been normal in our country can’t be any longer if our streets are to become safer. Canadians must understand the complexity of gun violence, resist the urge for easy answers and be able to hold ourselves accountable for achieving progress, even when journalists and politicians aren’t paying attention.

For kids who lose classmates and friends to gun violence every year, schools are an important starting point for any analysis. In our schools, the expectations on young men are set by their teachers and their peers. This is where a young man might learn to see his path to a better future paved with crime rather than academic achievement. Additionally, schools are where young men should find their mentors, but often times they do not.

In these neighbourhoods, generation after generation is affected by the same gangster subculture. Troubled incoming Grade 9 students walk the same path as troubled outgoing Grade 12 students. A young man who finds himself incarcerated is likely to have an older brother or friend who was locked up before him. It’s hard not to wonder how much of this problem is a choice. Are the young men who pick up a gun just fulfilling their destiny? Did a combination of family circumstances, poverty, lack of education and criminal influences set them on a path leading to unavoidable suffering? Are violent tendencies being passed on to them unknowingly by previous generations who struggled similarly?

The role of personal choice, and personal responsibility, is always up for debate when discussing crime. It’s especially important when discussing crime that disproportionately involves young people. After all, most Canadians aren’t prepared to say that a shooter who is under 18 years old, as numerous suspects in Toronto’s recent string of shootings are, should only be seen through the lens of choice and responsibility. These children are being significantly shaped by the world around them, and that’s partly why we don’t treat juvenile offenders the same as adult offenders. Still, we must have some way of explaining why one particular teenager out of thousands in the same neighbourhood becomes a killer. Most kids who grow up in a struggling neighbourhood live by the law perfectly and the outside world never learns their names. Choices are being made somewhere.

Tensions between emphasizing personal choice or environment have been described by McMaster University psychology professor Martin Daly as an “ancient debate between materialism and idealism.” Idealists focus on the norms, values and attitudes that lead individuals to making good or bad choices. Materialists prioritize the environmental incentives around a person that motivate their actions and behaviours. Prof. Daly explains in his 2016 book, Killing the Competition, that where people fall in this debate has important policy implications, because an idealist might propose remedies that address individual needs, such as education, while a materialist might propose remedies that address structural issues, such as broader economic inequality.

Thoughtful observers never fully move past this ancient debate because they know how high the stakes really are. More than anyone, residents of neighbourhoods where violence claims many young lives wish for easy answers to this problem, but, as you see more gun violence in your community, you also see an overwhelming number of factors that contribute to crime. When you understand youth-involved killings to be the complex human tragedies that they are, you think twice before claiming to know definitively what will make our streets any safer.

This need for humility is partly why there’s skepticism of police responses to gun violence, even among people who believe more law enforcement is necessary. Investing millions of dollars into police budgets often overshadows other relevant responses worth considering. Expectedly, this summer, 200 more police officers will be added to patrol Toronto at night. This will take another $3-million out of the city’s budget. More cops won’t solve the complex problem of gun violence alone, yet such investments are often the only clear, specific and measurable response offered by government to reduce violence.

Skepticism of police responses to gun violence also grows from a lack of certainty about how neighbourhoods will be policed. If anything, the past five years of public debate over racial profiling and over-policing in minority communities should teach us that not all policing is the same. Some law-enforcement strategies are more effective, fair and positive than others. Failing to acknowledge differences between law-enforcement strategies is also failing to communicate to the public that anything has been learned from years of strained relations between cops and the neighbourhoods they serve. When cities such as Toronto announce they will be adding more police officers to reduce violence, they should also clarify what kind of policing those officers will be engaged in, what relationships they have, or hope to have, in the community and why they believe their presence will help resolve the alarming conflicts within our communities.

The federal government has agreed to contribute to Toronto’s $15-million gun-violence plan that will fund community programs such as job-training initiatives in addition to hiring more police officers. Such a large budget raises the question of how those charged with spending public dollars will know they’re spending the money wisely. Surely, just as all law-enforcement strategies aren’t created equal, all social services or community programs aren’t created equal either.

Sincerely recognizing the complexity of gun violence and the need to stop it must include investing in research to ensure we are using our public dollars wisely. Our cities shouldn’t spend millions of dollars without good reason to think that money will make a positive difference. And, despite being home to three universities and dozens of research centres, our biggest city, Toronto, doesn’t have anyone doing the kind of work University of Chicago’s Crime Lab does to test initiatives empirically, claiming to make neighbourhoods safer and then advocate for initiatives that work. Our mayors and police chiefs should be referencing an equivalent of the crime lab’s studies when seeking our confidence that their proposed solutions will work.

This year, young leaders have shown they can step up to combat gun violence. After 17 people (mostly high-school students) were killed by a mass shooter in Parkland, Fla., a youth movement started to push for greater gun control in the United States. The movement, called March for Our Lives, made international headlines and even inspired marches in Canada.

A youth movement of similar scale and energy has not occurred in response to urban gun violence this year, in the United States or Canada. This may partly be explained by the complexity of gun violence at this scale, and how difficult it is to narrow down a set of recommendations for fixing it. More pressing, though, is the desensitization among youth who live with the effects of gun violence on a regular basis. Starting a movement requires believing things can be different. It also requires being outraged. Unfortunately, when your country sees violence in your community as normal, you often do, too. 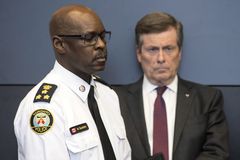