The answer, it appears, is a resounding no. This week, in the face of mounting protests, the Montreal International Jazz Festival cancelled the show SLAV only a few days after it began its sold-out run.

SLAV is (or was) a theatre revue that explored slavery and oppression throughout history, using the vehicle of black slave songs. Its star was a white singer named Betty Bonifassi. Four of its six supporting cast members were also white, and so was its director, the legendary theatre great Robert Lepage. That spelled trouble from the start. Protesters denounced the show as a racist appropriation of black culture. “Is there nothing y’all won’t steal?” one sign read. “White culture is theft.”

The protests snowballed. Fifteen hundred people signed a petition. Black artist Moses Sumney withdrew from the festival, criticizing the show as “appropriative, hegemonic, and neo-imperialistic.” The Montreal Gazette’s music reviewer, T’Cha Dunlevy, was not satisfied with the cancellation. “By not exhibiting anything resembling contrition at the uproar that has ensued, they perpetuate the very inequalities they purport to address, ” he wrote.

On the face of it, the show’s casting decisions do seem strange. So here’s some background. Ms. Bonifassi has been performing these songs for 15 years, based on material she researched and developed herself. She has released two albums related to her research. This show was five years in the making. She has an impressive voice and a huge stage presence. She’s not just a hired gun. She created the show. Without her, it wouldn’t exist.

Having said all that, I still don’t know – given the sensibilities of the age – if it’s a good idea to have a white singer performing black slave songs. But I’d rather have the chance to judge for myself. Ultimately it’s the audience, not the censors or the mob, who should decide. If people don’t like the idea they can stay away.

But Ms. Bonifassi never had a chance. She was doomed by the colour of her skin. She was also doomed by her explanation that she wanted the show to be colour-blind. “I don’t see colour; to me it doesn’t exist, physically or in music,” she told the Gazette’s music critic. ”We don’t talk about black and white in the show. We talk about human pain, experienced together. All cultures and ethnicities suffer the same.”

The trouble is, you can’t say that. In the first place, the suffering of black culture is held to be unique. And, according to Charmaine Nelson, an art history professor at McGill, any talk of colour-blindness amounts to a “whitewash” of our “deeply troubling colonial histories.” As Ms. Nelson told the Gazette, “... regardless of the caliber and reputation of the singer, the jazz festival should have extended such an opportunity first to a black singer and more specifically one whose ancestry is rooted in transatlantic slavery.”

Complaints of cultural offence are widespread these days. They have shut down two separate theatre productions of Othello in Canada, where the directors had the idea of casting Othello as a woman. In Britain, a student production of Aida was shut down because activists warned that white people (instead of, presumably, Egyptians) might be cast in the leads. Yet when the Stratford Festival cast a black actor in the lead role of The Music Man (that whitest of all shows), everybody cheered. How does this make sense?

Today, we have passed from a world where colour-blindness is the goal into a world where we are required to show exquisite deference toward groups with protected status. Those who don’t belong to the protected group are not allowed to tell that group’s stories, or represent them in any form at all. As the novelist Lionel Shriver said in The Guardian, “These days, straight, white fiction writers whose characters’ ethnicity, race, disability, sexual identity, religion or class differs from their own can expect their work to be subjected to forensic examination.”

So much for the creative imagination, then. Even Shakespeare would have been shut down. The public shaming of artists is a great way to stifle art. And in a censorious age such as our own, the best way to avoid public shaming is to play it safe. What we need here is a little more backbone. 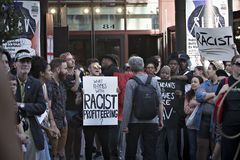 The trouble with Robert Lepage’s colour-blind show about slavery
June 29, 2018