It’s not entirely magnanimous that Burton Snowboards is giving employees time off to attend the Friday climate strikes on either side of Monday’s United Nations Climate Summit. Without snow, the Vermont-based company doesn’t have a reason for existence, and forgoing a couple of days’ salaries and sales is a lot cheaper than going out of business. Same goes for the outdoor outfitter Patagonia – both companies closed their websites along with U.S. and some international stores last Friday, when millions of people worldwide gathered and marched for climate action.

Along with B.C.-based Mountain Equipiment Co-op, they’re closing Canadian stores for this week’s march, on Sept. 27. The move is a statement about the climate emergency, but also an acknowledgment that a warming planet is already affecting the winter sports industry’s bottom line. According to the charity Protect Our Winters, low snow years between 2001 and 2016 has resulted in a loss of more than US$1-billion for the U.S. industry. It’s being felt here, too: North of Vancouver, warm temperatures closed the Cypress Mountain Resort for most of the 2015 season.

Movements to protect the natural environment are often positioned as economically foolish. From logging to cattle farming to the big one – fossil-fuel extraction – any suggestion that emissions-intensive industries need to be reimagined, slowed down or even stopped are met with derision or eye-rolls. This clash was highlighted in a searing speech by Greta Thunberg at Monday’s meeting.

“People are suffering, people are dying, entire ecosystems are collapsing,” she said, excoriating a room full of world leaders. “... And all you can talk about is money.”

Those who still won’t change the subject should note that emissions-as-usual has financial impacts, too. Tourism, farming, fishing, insurance: Plenty of industries are already being shaken by rising seas, sweltering temperatures and unpredictable weather. Climate change is set to destabilize everything and that includes the world’s economies.

Small businesses are also putting planet before profits for these strikes, which can be a significant financial commitment. Toronto entrepreneur John Ryan estimates that it will cost about $10,000 in salaries and billable hours for him and his husband to close their design studio, Office/Bureau, to strike alongside their eight employees.

“I would say anyone’s long-term viability, business or otherwise, is connected to our climate," Mr. Ryan told me last week. He wishes that climate-change mitigation, and the economic impact of neglecting it, was a bigger issue in the coming federal election. “Does a tax incentive or a tax cut matter if the world is literally on fire? Probably not.”

Mr. Ryan’s sense of urgency is shared by the Bank of Canada, along with the 41 other members of the Network for Greening the Financial System (NGFS), including the central banks of France, England and China. Formed in early 2018, the network released its first comprehensive report examining the financial risks posed by climate change in April.

The 42-page report may not be a scintillating read, but it focuses on economic stability – or, rather, how global warming will continue to disrupt it. Put simply, it says, climate change will “affect all agents in the economy (households, businesses, governments), across all sectors and geographies.”

Some of the projected economic effects are already being felt, such as devalued real estate. One Colorado real estate agent told NBC that his season for selling winter vacation homes is shrinking along with snowfalls. “Where is my livelihood in the future, in three to four, five years?” he worried. In the longer term, a study cited by NGFS predicts global incomes could shrink by as much as a quarter by the end of the century.

And one of the greatest financial risks is abrupt change forced by the environment, instead of gradual, directed transition away from high-carbon technology. Shifting to green-energy solutions may seem expensive now, reads the report, but “the estimated costs are likely to be small compared to the costs of no climate action.” In Canada, the cost of damage from natural disasters is doubling every five to seven years, according to the insurance industry, which then hikes its premiums to stay profitable.

Asset protection is unlikely a top concern of most strikers, especially those coming of age to face unaffordable housing and insecure employment. Science is their main driver, along with the fear and grief brought on by its stark truths. Those who are inclined to prioritize economy ahead of the environment might note that financial systems exist here, on Earth, where everything is already changing. 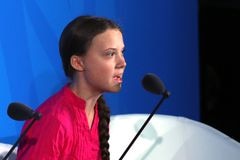 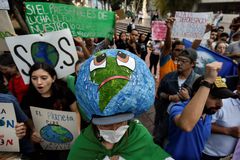 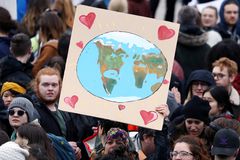