Brahma Chellaney is a geostrategist and the author of the award-winning Water: Asia’s New Battleground

Just as German Chancellor Angela Merkel reached New Delhi last week on a state visit, noxious smog blanketed the Indian capital, forcing a shutdown of schools for five days and a temporary ban on construction activity and millions of private vehicles. Indeed, Ms. Merkel’s two-day visit coincided with the declaration of a public-health emergency in the city, prompting her to pitch for green urban transportation, including electric buses.

New Delhi’s buses are already green: They run on compressed natural gas. The city’s seasonal smog problem, which comes with cooler temperatures and slower winds in the postmonsoon period, is largely linked to a deleterious agricultural practice in nearby states – after harvest, farmers burn crop stubble to clear their fields.

The fumes from the stubble burnings mix with New Delhi’s vehicle emissions, construction dust and smoke from fireworks set off during Diwali, the festival of light. This creates an annual toxic haze that lingers for days or even weeks, partly owing to topography. The cool air with its pollutants gets trapped by the hills that surround the city on three sides.

At the beginning of this month, New Delhi had the dubious distinction, in terms of the air-quality index (AQI), of topping the list of the world’s most-polluted capital cities, with levels of deadly particulate matter reaching multiple times the global safety threshold. The opaque haze reduced visibility to such an extent that even some planes could not land at the international airport.

Add to the picture the gloom and doom on which Indian newspapers and opposition politicians thrive, which made the smog situation appear worse. “Capital punishment,” screamed the front-page banner headline in the Hindustan Times, a leading English-language newspaper. The Indian capital’s chief minister, Arvind Kejriwal, who belongs to a small regional party, claimed the city had turned into a “gas chamber.”

Since Tuesday, New Delhi’s AQI has significantly improved following light showers and strong breeze. (Wind, rain and snow act as pollution scrubbers.) More rain fell on Thursday. With the thick haze dissipating, a blue sky is again visible in the daytime and the moon at night. But the city’s environmental crisis is far from over.

Burning of crop stubble has long been an expedient way for Asian farmers to prepare fields for the next crop. While China has employed its authoritarian system in recent years to forcefully crack down on this polluting practice, thereby significantly reducing Beijing’s air contamination, democratic India has failed to stop the crop-stubble burnings.

Farmers, constituting the largest voting constituency in numbers, are politically powerful in India. State governments have recoiled from levying fines on stubble-burning farmers.

India’s Supreme Court this week ordered state governments to incentivize an end to stubble burnings by doling out cash rewards to farmers who do not burn their fields. “It has become a question of life and death for the common people,” the justices said while seeking accountability from federal and state governments over the smog.

The modest dole-outs the highest court has recommended, however, might not suffice to end the stubble-burning practice. Authorities also need to encourage farmers to buy machinery that helps turn stubble into mulch. This means subsidizing their machinery purchases.

Here’s the paradox: An environmentally conscious Prime Minister Narendra Modi, who initiated a “Clean India” campaign soon after assuming office in 2014, confronts a smog problem that has become acute on his watch.

India is one of the few countries trying to ban single-use plastic items. It has implemented a complete ban on the import of plastic waste. And to control air pollution in New Delhi, a nearby coal-fired plant was shut down last year and the use of private vehicles restricted to alternating days during the pollution season, with cars with odd-number licence plates allowed to drive only on odd-numbered dates and cars with even-numbered plates on even-numbered dates.

More fundamentally, New Delhi’s recurring smog problem underscores the mounting costs India is paying for years of environmental neglect. According to World Health Organization (WHO) data, India has the majority of the world’s most polluted cities, a fact that holds important consequences for public health in the country.

The WHO defines health as not merely the absence of disease or infirmity but a state of complete physical, social and mental well-being. A sound natural environment is central to such well-being.

The Indian establishment, with its ostrich-like mindset, acts only when a problem turns into a crisis. As a result, the deteriorating air quality in New Delhi and other major northwestern Indian cities has became a national crisis, drawing international attention and affecting the flow of tourists to India.

In fact, unprecedented pressures on natural resources and ecosystems are triggering a broader range of adverse environmental impacts. Rapid development, breakneck urbanization, large-scale irrigated farming, lifestyle changes and other human impacts have resulted in degraded watersheds, watercourses and other ecosystems, as well as in shrinking forests and swamps. The illicit diversion of sand from riverbeds for the construction boom has damaged rivers and slowed the natural recharge of aquifers.

To be sure, India’s environmental challenges mirror those of many other developing countries, from Mexico and Peru to Indonesia and the Philippines. The imperative to develop environmentally friendly policies and practices, however, transcends the developing world. Wealthier countries with disproportionately large environmental footprints – from the United States to Australia – also need to embrace environmental protection in earnest.

Environmental protection, in the long run, is cheaper than environmental cleanup and restoration. If India’s national planners were more forward-looking, the country could avoid repeating the mistakes of other countries, instead of investing resources in tackling air, soil and water pollution and other environmental degradation. The degradation adversely affects climate, ecosystems, biodiversity and public health.

The fact that China’s environmental-contamination problems are worse than India’s, despite Beijing’s improved air quality, can give Indian authorities no comfort. As the world’s factory floor and largest exporter, including of coal-fired power plants, China is exacerbating the global environment crisis. India, with a services-led, import-dependent economy that relies largely on domestic consumption for growth, can scarcely defend its levels of air, soil and water pollution.

India needs a more holistic and integrated approach to development that places environmental protection at the centre of strategic planning. Without such an approach, the linkages between a healthy natural environment and human health could trap India in a vicious cycle in which environmental degradation contributes to public-health issues, and vice versa.

The New Delhi smog is a reminder that human health is inextricably linked to nature’s wealth, which we must cherish and protect. 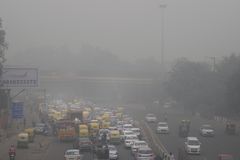 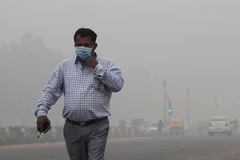