Robyn Urback
Published May 7, 2021 Updated May 7, 2021
For Subscribers
Comments
Text Size
Please log in to listen to this story. Also available in French and Mandarin. Log In Create Free Account

Cast your mind back to simpler times, to 2019, when comedian and talk show host Ellen DeGeneres temporarily lost her “daytime darling” status when she was spotted by broadcast cameras looking jovial sitting next to former U.S. president George W. Bush at a football game. The two appeared to be joking and laughing, which was deemed an unacceptable interaction for a gay, progressive vegan toward a man who, if not for Congress, would’ve outlawed all three (according to the more hyperbolic reactions, at least).

Ms. DeGeneres addressed the controversy on her show shortly thereafter, saying that she maintains a friendship with Mr. Bush, even though they don’t share the same beliefs. “When I say, ‘Be kind to one another,’ I don’t only mean the people that think the same way that you do,” Ms. DeGeneres said. “I mean be kind to everyone.”

This explanation didn’t satisfy her most vocal critics, however. Journalist Glenn Greenwald lambasted her for “laughing it up” with a “torturer and war criminal.” Actor Mark Ruffalo said Mr. Bush shouldn’t be shown kindness until he was “brought to justice for the crimes of the Iraq War.” Out Magazine wrote that watching Ms. DeGeneres pal around “with those who have actively tried to harm us feels disappointing, irresponsible and dangerous.” Through that one interaction, Ms. DeGeneres’s reputation was imbued with the stink of a man whose record she likely wouldn’t defend anyway.

That situation is somewhat analogous to the scandal that now engulfs Suzanne Rogers, honorary patron of the Suzanne Rogers Fashion Institute at Ryerson University and wife of Rogers Communications chairman Edward Rogers, if for a few details.

This past weekend, Ms. Rogers faced backlash for a photo of her and her family smiling alongside former U.S. president Donald Trump at his Mar-a-Lago resort in Florida. Unlike the accidental image of Ms. DeGeneres and Mr. Bush, however, Ms. Rogers herself blasted the photo to the world (rather tone-deafly, during a pandemic when Canadians are discouraged from travelling) on her own Instagram Stories.

And though she has been careful not to articulate her precise opinions on Mr. Trump and his presidency, it is reasonable to infer glee from her caption (“Special way to end the night!”) and from the absence of an erect middle finger that she might not see the former president as a radioactive and corrosive figure who undermined his own country’s democracy and downplayed the effects of a deadly pandemic. (Her husband, Edward Rogers, has been a little more transparent in his apparent admiration for the former president on his Twitter feed.)

But the reactions to the photo have been remarkably similar to those directed at Ms. DeGeneres nearly three years ago. Ryerson’s fashion school posted a statement on its Instagram account calling for a “dialogue” with Ms. Rogers about the “practices of white supremacy, exclusion and discrimination that we feel Trump actively enforced and executed during his time as U.S. President.” The statement was then taken down and replaced with a new one noting that the previous post was not endorsed by Ryerson University, and that social media is not the “appropriate platform to judge the actions of others.” (That revision created an entirely new controversy about Ryerson “silencing” its fashion school.)

Ms. Rogers posted something of a mea culpa on her Instagram, noting that she does not have any relationship with Mr. Trump and adding that she regrets that the photo “caused anyone to question” her values. But a sorry-if-you-were-offended apology obviously won’t rid Ms. Rogers of the stink that this photograph will leave on her reputation, at least in some social circles.

To be sure, Ms. Rogers will be just fine; belonging to one of the wealthiest and most powerful families in the country renders one somewhat impervious to these sorts of academia-centred scandals. But the hastiness among some to infer the absolute worst about an individual based merely on a fleeting association or snapshot in time is a bad practice for everyone.

For years, there has been robust discussion both in Canada and U.S. about whether MAGA hats, for example, are themselves symbols of hate, or whether wearing one merely illustrates support for Mr. Trump that, at worst, symbolizes a sort of privileged nonchalance about the hate he has espoused. The reality is, however, that there is no clear answer; the hat alone doesn’t tell us whether the wearer believes Mexicans are flowing across the border to sell drugs and commit crimes, for example, or whether he’s merely a factory worker enthused by the former president’s “Buy American” platform (and can simultaneously look the other way when the president goes off on migrants).

Both possibilities aren’t great, but they point to the fact that people are complex and multidimensional. They can forge unlikely friendships with political adversaries and support certain leaders despite vehement opposition to certain elements of their platforms. A hat, or a photograph, or short video clip can’t comprehensively tell us all we need to know about an individual’s personal value system. All it can really convey, with any certainty, is that a socialite may not know when to put the camera away.

Ryerson students in uproar over erasing of message critical of donor’s photo with Trump
May 3, 2021 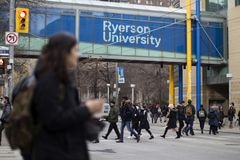