Kim Samuel is a policy adviser at the Oxford Poverty and Human Development Initiative and founder of the Samuel Centre for Social Connectedness. She is currently working on a book called The Right to Belong.

Ten years ago, on Mar. 6, 15 students were arrested and tortured in the Syrian city of Daraa for writing anti-government graffiti on public walls. The events sparked pro-democracy protests in the city; within days, those protests spread to the capital of Damascus and scores of other cities.

The events set in motion a chain reaction of civil uprisings and increasingly brutal government crackdowns that resulted in the Syrian civil war – one of the longest and most devastating humanitarian crises of this century.

Today, a full decade after the start of the war, an estimated 5.5 million Syrians are still living as refugees around the world; upward of six million more have been internally displaced within Syria. That’s more than 10 million people who are being denied the fundamental human right to have a place to call home.

The slow-burning tragedy of the civil war should be a wake-up call for us all. Modern humanitarian crises – whether in Syria, South Sudan, Myanmar, Venezuela, Afghanistan or elsewhere – aren’t just short-term emergencies. These are long-term crises that demand our careful and sustained attention, sometimes for a decade or longer.

We in Canada have to think strategically about what it means to ensure that forced migrants have not only temporary safe harbour, but also the lasting experience of home.

In November, scholars at Stanford University, ETH Zurich, the University of California Santa Barbara and the London School of Economics published a major study of 3,000 Syrian refugees’ households, shining a light on modern crises of forced migration and the challenges of returning home. The researchers found that only 5 per cent of forced migrants felt they could plausibly return home within a year, owing to concerns about persecution, compulsory military conscription, further economic hardship and a lack of public-sector services in their country of origin.

Whether you look to conditions among the Rohingya, forced to flee extreme repression in Myanmar, or the citizens of South Sudan who have fled mounting violence, or the tens of millions now facing forced migration owing to environmental degradation, the underlying truth is the same: In spite of nativist epithets to the contrary, people can’t simply “go back to where they came from.”

The Canadian government, to its credit, is taking modern crises of forced migration seriously. In late 2020, Immigration Minister Marco Mendicino affirmed a goal of more than 1.2 million new migrants over the next three years, which would include large numbers of asylum seekers.

As Mr. Mendicino emphasized in his remarks, this is in Canada’s own national interest, amid a struggling COVID-19-era economy and low population growth. Canada needs more workers, and, as Mr. Mendicino put it, “immigration is the way to get there.”

Still, the “enlightened self-interest” of accepting migrants and asylum seekers is about more than gaining needed members of the work force to pay into pension funds and tax coffers. Migrants offer a society myriad gifts that can’t be measured in strictly economic terms. Providing sanctuary is only part of what’s required of us.

At a time when tens of millions of people are being forced to flee their lands, cultures, languages and livelihoods, we have a moral responsibility to help forced migrants recover the experience of home. Yes, this means traditional forms of transitional help including financial assistance and employment training, but it also means the deeper work of cultivating belonging.

Truly belonging in a place means more than simply meeting the material conditions promised by the postwar project of the UN’s Universal Declaration of Human Rights. It means understanding other people and being understood; it means being able to contribute; it means being respected and represented as part of the social fabric and civic life of the community and broader nation.

There are blueprints for how to bring these ideals into practice. In recent years, for example, I’ve had the opportunity to participate in a program called Common Threads, a collaboration of multiple NGOs. It works to ensure that refugee arrivals are able to build meaningful relationships with local people in a new community, receiving guidance on day-to-day questions such as how to find the grocery store, make small talk with neighbours, or navigate the bureaucracy of the school system.

More broadly, the work of Common Threads is about building a positive narrative around migration: helping to ensure that people in the community understand the dire conditions from which migrants are fleeing as well as the positive social, cultural and economic effects that new arrivals have on our society. The goal is to create the cultural conditions for migrants to be not only integrated but embraced in their new neighbourhoods, schools and workplaces.

Today’s ignominious anniversary is an important reminder that we can’t avert our eyes to humanitarian crises, even years after the worst violence may have subsided. As we contemplate the long duration of the dire situation in Syria, it’s clear that we need to invest in preventing crises from reaching such magnitude in the first place, and – when such serious crises do arise – we need to look clearly at what it takes to address their diverse long-term consequences.

In an age when so many forced migrants lack realistic prospects of returning to their places of origin, we have a responsibility to not only help provide refuge, but also to help them find belonging and a place to call home. 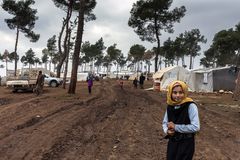