Lawrence MartinPublic affairs columnist
Washington
Special to The Globe and Mail
Published May 17, 2019 Updated May 17, 2019
For Subscribers

The numbers are amazing. Sleepy Joe Biden, as Donald Trump calls him, is running away from the Democratic field in the race for the presidential nomination, according to various polls.

He has roughly double the support of the closest pursuer, Bernie Sanders. The others in the sprawling field of 20 or so are mostly in single digits, hopelessly out of Biden’s range, this despite their town halls and media hype and spending binges.

And no, it’s not just name recognition. Mr. Biden, who served as vice-president for eight years, had huge name recognition before he formally entered the race last month. Although considered the front-runner, his numbers then were much lower than what they are now.

The Democratic rank and file are sending the message that Joe’s their guy. The pundits, myself included, were wrong again. Hardly any of us foresaw this Biden-boom. We thought that given his uninspiring centrist creed, his Hillary Clinton bygone-era feel, his gaffe-machine reputation, the waves of other exciting new faces in the race, Mr. Biden would stall, if not fall.

But his lead is such that it’s now bringing on speculation, probably wrong again, that what promised to be a pulsating year-long nomination fight may be over before it’s barely begun.

Striking is that none of the newcomers can catch fire against Mr. Biden or Mr. Sanders. Texan Beto O’Rourke, featured as a new Bobby Kennedy, was deemed a big prospect but has been slipping back. Pete Buttigieg, the young mayor of South Bend, Ind., has received fawning press notices but languishes way back in the polls. Despite her strong presence, Senator Kamala Harris is in single digits as well and is insulted at talk she might be a good running mate for Mr. Biden.

The big Biden numbers are not a result of flattering media coverage. He’s had a lot of negatives from his 40 years in Washington dredged up and featured on front pages but they haven’t hurt him.

He is benefiting from a number of factors. He’s the one big-time moderate in the field. Others are on the left or flirting with that segment of the party. The signal from the polls is that a moderate is what the party wants, and that candidates have overestimated the desire among Democrats for radical change.

Mr. Biden is also benefiting from his close ties to Barack Obama. There’s a deep reservoir of goodwill toward the former president, whose elegance and erudition stands in contrast to the Republican incumbent.

Former vice-presidents have a big advantage in seeking the nomination. Al Gore won it for the Democrats in 2000, following Walter Mondale in 1984. On the Republican side, George H. W. Bush won in 1988 and Richard Nixon in 1960.

But the biggest plus for Mr. Biden is his likeability. Democrats feel comfortable with him. A CNN poll last month showed that more than eight in 10 Democrats have a favourable view of Mr. Biden. That is an impressive number. It’s important because it means there won’t be much passion for putting stop-Biden movements into play. He fits the bill as the compromise candidate.

In hypothetical polls he does better pitted against Mr. Trump than the other contestants.

The big hesitation in getting overly excited about the Biden-boom is time. There’s eight months until the primaries begin. Has he peaked too soon? Like eight months too soon! His numbers are currently so high that there is likely to be slippage. When they start to fall, the media, desirous of a competitive race, will only be too glad to start writing “Biden is fading” in the headlines.

Many a candidate has had a big early lead and hasn’t made it. It happened to both Hillary Clinton and, on the Republican side, Rudy Giuliani in 2008.

In the Republican nomination battle in 2016, Jeb Bush came in with a ton of money and was deemed the big favourite but Mr. Trump labelled him “low-energy Jeb” and it stuck. Jeb Bush sunk like a stone.

House GOP Leader Kevin McCarthy calls Joe Biden the “Jeb Bush of this cycle.” But while Mr. Bush did have a drowsy look, the “sleepy Joe” tag won't stick with Mr. Biden, who for his 76 years, is rather bouncy.

Democrats don’t appear to want anything new and radical. They want stability and good sense and normalcy. At the moment – emphasis on “moment” – they think that Joe Biden is their best hope for that.

Bernie Sanders zeros in on Joe Biden as 2020 Democratic nomination heats up
May 17, 2019 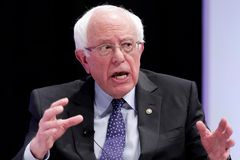 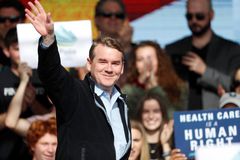 'I am a union man’: Biden announces plans to restore middle class in Pittsburgh speech
April 29, 2019 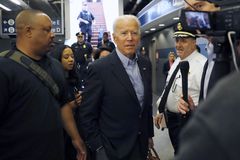