Michael Coren is a columnist and broadcaster, and author of Epiphany: A Christian’s Change of Heart and Mind Over Same-Sex Marriage.

It’s a controversy that just a few years ago would have been beyond even the most perverse imagination. The British Labour Party, in government for more than 25 years since the Second World War, the party of social democracy once led by Tony Blair, is in the middle of an agonizing battle over accusations of anti-Semitism. Long considered the natural political home of British Jews, the party’s leader, committed socialist Jeremy Corbyn, was even accused recently by veteran Jewish Labour MP Margaret Hodge, of being a “fucking anti-Semite.” She denies the obscenity but defends the charge.

Mr. Corbyn isn’t anti-Semitic, and neither is his party. But he and others on the hard left are experiencing the same dilemma the world over: Jews as Jews aren’t the issue, but Jews as Zionists, and as supporters of Israel, most certainly are.

In Britain, a small number of Labour MPs and activists, some of them in fact Jewish, have made remarks that go far beyond informed criticism of Israeli policies. A few were suspended or even expelled from the party. But not all. The Labour Party was then urged to adopt the International Holocaust Remembrance Alliance’s definition of anti-Semitism, one that is internationally accepted, and used by the British government, and numerous police services. They did so, but not in its entirety.

The reasons are that the IHRA definition argues, for example, that it’s anti-Semitic to compare Israel to Nazi Germany, to claim that the foundation of the Jewish state was a “racist endeavour" and to use classic anti-Semitic images to criticize Israel. Labour’s response is that, “Discourse about international politics often employs metaphors drawn from examples of historic misconduct. It is not anti-Semitism to criticize the conduct or policies of the Israeli state by reference to such examples unless there is evidence of anti-Semitic intent.” The party was wrong not to adopt the full definition, and they refused to do so almost certainly because of the leadership’s fear that if they did, some party members could be caught up in the IHRA net.

I grew up in Britain, and return on a regular basis. My father was Jewish, and I’m largely a product of Anglo-Jewish culture. I also know the Labour Party well, and was at university with some of the very people now being accused.

Genuine anti-Semitism, the visceral hatred of Jewish people based exclusively on the fact that they are Jewish, is extraordinarily rare in British left-wing circles, or in greater British society, for that matter. What is increasingly common on the left, however, in Britain as well as elsewhere, is a refusal to understand or give any sympathy to the Jewish experience. Jews in the Western world are not part of a persecuted group, but they are only one or two generations away from not only widespread discrimination, but also the most hideous attempt at genocide in history. Israel as a state did not appear out of some political and moral vacuum, and Jews did not suddenly decide that a war zone in the Middle East was preferable to where they had lived for hundreds of years. They went because there was little, if any, option. It is this immutable truth that often escapes the left.

Mr. Corbyn’s opponents, however, often avoid another absolute truth. Palestine was not a land without a people for a people without a land, but a place where Palestinians had lived for centuries. The revisionism that most of us accepted in the entirely laudable post-Holocaust concern for Jewish safety can no longer be accepted: Palestinians were indeed driven out of their homes, are treated appallingly and are not a “problem” but a dispersed people requiring justice.

Israel was founded on desperation rather than colonialism, but nevertheless has increasingly played the role of colonizer, and the left too often concentrates on this and ignores the grotesque anti-Semitism that created the current situation. Political myopia infects both sides, and discussion of Israel tends to bring out the worst in opponents as well as supporters.

Added to this is a Muslim community in Britain that while not always concerned with the Middle East – they’re generally from South Asia and care more for Kashmir than Gaza – have spoken out for fellow Muslims in the Palestinian Territory, sometimes with a disturbing rawness.

It’s all made far worse by a right-wing media that detests Mr. Corbyn and exploits the situation, and a Conservative Party that wants to appeal to the Jewish community and the mass of British people who reject any form of extremism. It’s a mess, and I’m about as confident that the Labour Party dispute will be sorted out to everybody’s satisfaction as I am that a workable peace will be found in the Middle East. And that is a terribly depressing thought. 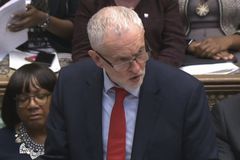