Rob Huebert is an associate professor in the department of political science and senior research fellow in the Centre for Military, Security and Strategic Studies at the University of Calgary.

It has become well-known that Donald Trump does not read history, much less understand it. Therefore, as he returns from meeting with North Korean dictator Kim Jong-un and makes his pronouncement that there is now “peace for our time” (or, more specifically in his words – “everybody can now feel much safer than the day I took office. There is no longer a nuclear threat from North Korea”), the words “September 1938” would mean nothing to him. Yet the parallels between the summit meeting of Mr. Trump and Mr. Kim in Singapore 2018 and Chamberlain, Daladier, Mussolini and Hitler in Munich in 1938 are too chilling to ignore.

In the case of both meetings, there was an argument that the very fact that democratic leaders were meeting with their dictatorial counterparts was an inherently “good” thing. This, of course, is based on the belief that direct access with a dictator by a democratically elected leader will somehow improve the actions of the dictator. I would suggest that the evidence on this article of faith is sketchy at best. Just as the meeting at Munich did not convince Hitler to forsake his plans of genocide and world domination, it seems just as unlikely that by shaking Mr. Trump’s hand and “looking him in the eye,” Mr. Kim will give up his policies regarding nuclear weapons and authoritative rule.

But more problematic are the similarities of both Neville Chamberlain and Donald Trump in their overstated belief in their own abilities to understand the dictator they are dealing with by trusting their “gut.” Chamberlain said of Hitler: “I got the impression that here was a man who could be relied upon when he had given his word.” Likewise Mr. Trump stated that Kim Jong-un is smart and someone he could work with. It does not matter that both dictators killed many in their own country and threatened the countries around them. Equally important, they both have, or had, an established record of lying and breaking their promises to other world leaders. But both Mr. Trump and Chamberlain believed that their own abilities to “take the measure of the man” was better than any reliance on the existing facts. Hence only they are capable of reaching an agreement with the dictators – or so they believe.

There are three core dangers that these conceits have. First, they give the dictators an elevated status of acceptability. Leaders such as Hitler and Mr. Kim are normalized through such summits and meetings. Mr. Trump went so far as to justify the horrific human rights record of the North Korean regime by saying Mr. Kim lives in a rough neighbourhood and that he and his family had to do what they had to do. This kind of act of “normalization” seldom – if ever – persuades dictators to improve their actions. Rather it only encourages them to continue their existing policies.

The second danger flows from the first. When an agreement is signed but there is no form of verification or enforcement, there is little likelihood that the agreement will be followed by dictators. As many analysts have already pointed out, the U.S.-North Korean agreement has little to say about actual North Korean actions. Mr. Trump seems to have forgotten that in April it is very probable that the North Koreans suffered a serious accident at their nuclear-weapon test site that possibly harmed or killed some of their leading nuclear-weapon scientists. If that is the case, then the North Korean “promises” not to further test weapons may only be reflecting that, for the time being, they can’t. Thus the omission of any meaningful promises in regards to verification, or even the country’s intercontinental ballistic missile program, is very troubling.

The third danger of when such agreements are signed by men like Mr. Trump or Chamberlain is the impact they have on allies and friends. Chamberlain was content to surrender the Czechoslovakians to the Germans without even consulting them. Likewise, there are indications that both the South Koreans and Japanese were not consulted when Mr. Trump declared an end to joint U.S.-South Korean military exercises. Noticeably, there was no equivalent offer by the North Koreans to reduce or eliminate their conventional forces, such as the massive concentration of artillery they have targeting, and capable of destroying, the South Korean capital of Seoul with non-nuclear weapons. Likewise, the Japanese will have also noted how easy it was for the North Koreans to convince Mr. Trump to withdraw these very important security actions and must now wonder what it would take the Chinese to convince Mr. Trump to withdraw some of their security guarantees.

This also has impacts on Canada. Any discussion that we have been having with the Americans on the issue of joining their anti-ballistic missile (ABM) system has just been dealt two severe blows. First, Mr. Trump has told us that there is no threat now – thanks to him – so why bother joining? Secondly, and more seriously, his recent trade actions against Canada – as he continues in his efforts to alienate all of his democratic allies – as well as his temper tantrum when Prime Minister Justin Trudeau stood up to him, makes it very difficult for any such discussions to proceed.

Chamberlain may have been able to proclaim that there is “peace in our time,” and Mr. Trump may crow that he has “solved” the North Korean threat, but unfortunately, history tells us that decisions made by men with such oversized egos are seldom correct. American allies and “friends” have just been placed in a much more dangerous environment – just as was the case in 1938 for British friends and allies. Peter Navarro: The man behind the Trudeau insult and the China tariffs Subscriber content
June 16, 2018 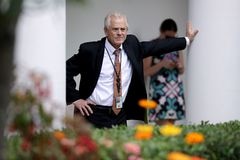 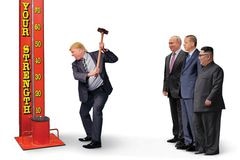