What remains of the Oak Park Motel resembles in a vague, unsettling way a school-fair diorama. The roof is gone and the walls mostly collapsed, the gutted interiors of a dozen or so squat guestrooms visible now from the roadside. Scorch marks surround the places where the doors and windows used to be. Across the one-lane highway, a couple hundred feet down the road, a Mexican restaurant sits in relatively pristine condition, and all along the crest of the near and far mountains the trees turned licorice with burning lean against the ones miraculously untouched. Who knows the reasons behind this haphazard distribution of ruin – probably it’s something to do with wind patterns or material resilience or human intervention. Maybe it’s just luck.

Last September, about a half-hour drive from where we live in Oregon, the forests burned – over the course of one of the worst wildfire seasons this part of the continent has ever known, roughly 400,000 hectares were incinerated, and some 40,000 people forced from their homes. Almost overnight, entire towns ceased to exist. For a while, if you lived here, the fires were the whole of the world. Every night we watched the news on TV, waiting on word of rain. People sealed shut their windows and folded towels under the doorjambs and made a run on air purifiers and listened to terrible advice about boiling rosemary even though it was obvious that boiling rosemary would do nothing to pull that suffocating campfire stink from the air, would make things worse, even. Fear makes one susceptible to miracle cures.

Then finally the rain did come, great sweeping sheets off the Pacific coast. In time the smoke thinned out and the blob of red on the state evacuation map began to shrink. Within a month, most everyone whose home or business wasn’t decimated by the fires had moved on. There were other things to worry about, the election and the pandemic and the cascade of daily absurdities against which the mind, in self-defense, takes refuge in forgetting. To visit the worst-hit places months later, the small sawmill towns that in all likelihood will never recover, is an indecent archeology. All of this feels like it happened so long ago – even as the state, at the time of this writing, lurches through yet another disastrous fire season, the largest blaze in the country currently raging along the Oregon’s southern border, mostly uncontained.

This is what’s normal now. A century of runaway fossil fuel use has fundamentally detached the climate from almost any moorings within the span of recorded human existence. Once-in-a-century heatwaves, storms, floods and fires now happen yearly. Regardless of our ability to meet the watered-down goals of myriad international climate agreements, we will leave our children and grandchildren a planet more physically upended, more precarious, in almost every way.

But even if we have failed utterly in our obligation to prevent or even simply mitigate this reality, we are still at least obligated to consider its most immediate consequence – the millions upon millions of people who will be forced from their homes in the coming decades by this cataclysmic new ordering of the world.

According to the United Nations High Commissioner for Refugees, more than 82 million people were displaced by conflict in 2020 – the highest number ever recorded. Yet as stunning as that figure is, it might come to be thought of in hindsight – like the current wildfires and droughts and floods – not as the terminus of some horrible trend, but the beginning.

It is almost certain that, in the coming few decades, the world will see a mass displacement of human beings almost unmatched in modern history. Depending on how high the seas rise, hundreds of millions of people who call a piece of coastland home might find it underwater. Huge swaths of the Middle East and Africa – already so sweltering that countries such as the United Arab Emirates are experimenting with electrically charged drones designed to shock clouds into producing rain – may soon become too hot for human habitation. Millions upon millions of people will be driven beyond the borders of their home countries by a crisis that has absolutely no concern for borders.

There is, in international law, almost no mechanism for dealing with this kind of forced migration. And unless one is developed and implemented quickly, the defining crisis of the coming decades will play out the way so many prior refugee crises have played out before – first with indifference, then rejection, and finally bloodshed.

One of my earliest travel memories involves watching my father solemnly swear that he was never a Nazi. Such was one of the requirements for entering America: filling out a form whose myriad questions included one about membership in or support for the Third Reich during a period that predated my father’s birth.

For a certain subset of people on this planet, all travel is like this, from a simple summer trip to permanent migration – an endless series of declarations that one is not a threat.

In many ways, the entire postwar infrastructure of borders and visas and movement control is predicated on a world of clearly definable danger – violent states, violent people, violent actions, all of them discrete and under the jurisdiction of some treaty or law or norm.

It’s a system that has been in place for decades and affords individual governments great leeway not only in defining responsibilities, but also shirking them. One of the reasons the world’s richest countries are so often reluctant to formally recognize acts of genocide, for example, is because recognition necessitates that something be done – there are rules, expectations, precedent.

But in the face of climate change, these mechanism by which human movement is ordered feel hopelessly archaic.

A hurricane season of exceptional violence – exacerbated by a climate change crisis that is itself a product of fossil fuel consumption from which the Western world has overwhelmingly benefited for decades – is a much less discrete thing. A person who flees their home because they know their child will not be able to survive the heatwaves of the coming years is, for all intents and purposes, afforded no protections at all.

Even though the Intergovernmental Panel on Climate Change has been warning about climate migration since at least 1992, there are virtually no legally binding international agreements on the issue, and few if any widely accepted definitions of what a climate migrant is. The term “climate refugee” is even more fraught, as a refugee has historically been afforded certain protections by law, none of which apply if the displacement is caused by climate change.

Given that somewhere around 20 million people a year have been displaced by climate-related events in the past decade, the utter lack of coherent policy is indistinguishable from malpractice. This year, the Biden administration began considering special protections for climate refugees – an idea that will undoubtedly face immense criticism from a Republican party that has made fear of the outsider a central load-bearing beam of its political tent. In New Zealand, a relatively prosperous country whose smaller Pacific island neighbors face the most immediate existential consequences of rising sea levels, the government tried implementing similar protections, before quietly shuttering the plan.

Like almost everything to do with the developed world’s response to climate change, it is astounding how little has been done to address a problem so glaringly self-evident. Creating a framework of basic protections for people driven from their homes by climate change would at least reduce some of the chaos around a crisis of mass movement that everyone already knows is coming, and in many ways is already here. But beyond the pragmatic reasons for building such a framework, there is something else – a matter of basic justice.

There is, throughout the West, a longstanding perception of what a good migrant is – useful, malleable to the demands of the dominant culture, eternally grateful. But these perceptions, discriminatory and condescending at their core, are even more so in the age of climate disaster. The Pakistani villager who is forced to flee because of flooding from melting glaciers is not obligated to be grateful to the part of the world whose century of unbridled consumption is at the root of this displacement. When the island of Kiribati sinks into the Pacific, it will do so having contributed essentially nothing to the carbon emissions crisis that helped speed its demise.

The traditional progressive argument for refugee resettlement in this part of the world often relies heavily on moral goodness, the notion that the world’s wealthiest countries should exhibit a spirit of charity to the planet’s most victimized. But this isn’t a matter of charity, it’s one of restitution.

Along the winding one-lane highway that leads through Detroit Lake and Mill City and a smattering of small Oregon towns half-obliterated in the wildfires, some of the charred vehicles still line the side of the road. In the yard of one decimated home, the husk of a minivan serves as holder for a giant Trump lawn sign – a detail that, had I included it in a piece of fiction, would immediately be condemned by any editor worth their salt as too heavy handed. Further down the road, from the edge of an overpass, an American flag corkscrews in the wind, next to it a hand-drawn sign that reads: “We Will Rebuild.”

To drive through these places now is to be reminded that losing is only one half of loss. The other half is this – the constant starting over, the constant rebuilding. It’s also difficult to consider that this is what climate displacement looks like in the most privileged part of the world, a country with massive wealth and emergency infrastructure and the capacity to relocate those whose home is gone. In a grim way, this is what the best-case scenario looks like.

As abstract as it may sound, the single most useful thing everyone in the developed world can do right now to mitigate a refugee crisis a few decades in the future is agitate in every possible way to dismantle our fossil fuel infrastructure. But regardless how much or little those efforts succeed, the damage already done means there will be, for years and years, an exodus of the world’s most vulnerable people, victims of a passive kind of colonialism whose residual artifacts are not statues of kings or emperors, but the very makeup of the atmosphere, the temperature of the planet. To the wealthy, sheltered places where they will seek refuge, these people owe nothing. That the violence they flee involves no guns or bombs makes it no less real, nor its perpetrators any less culpable. 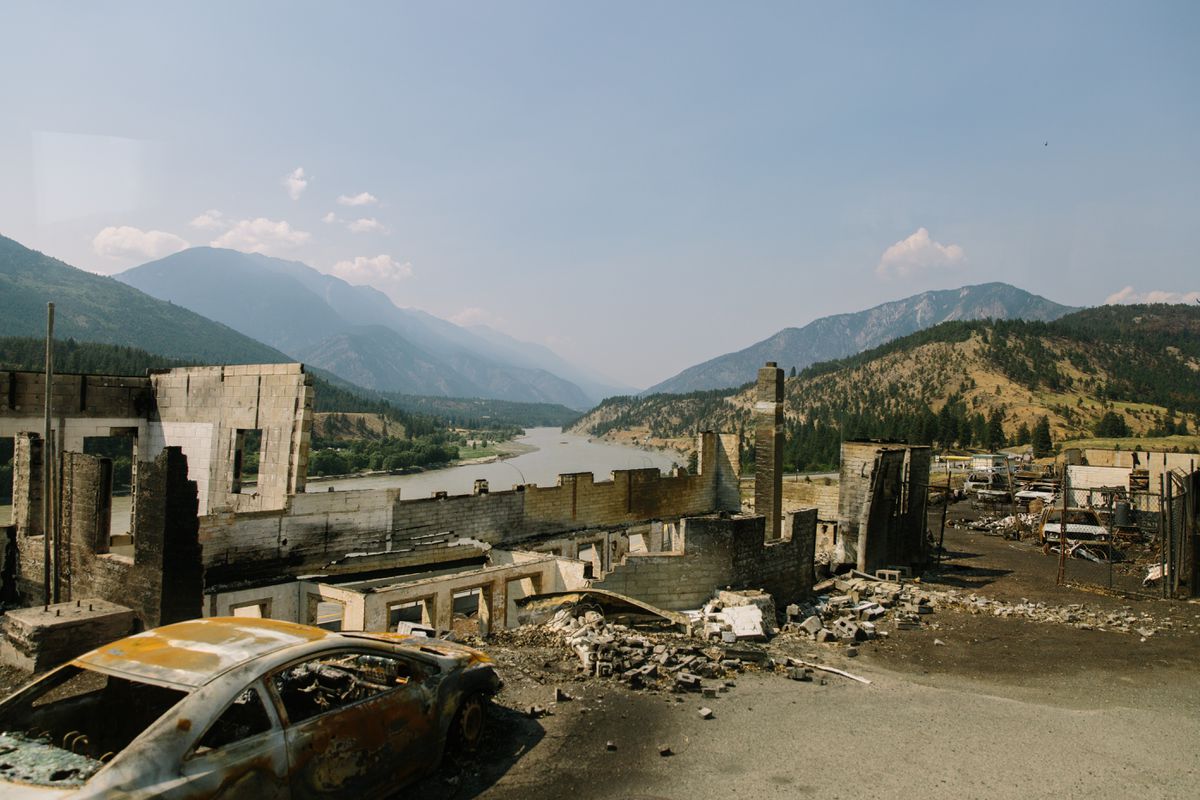 After the deadly inferno in Lytton, B.C., experts are looking ahead at the blazes that climate change will likely make worse and more frequent, Kathryn Blaze Baum explains.

opinion
Life under the heat dome: You might no longer know where you are
July 16, 2021
opinion
As climate change increases the risk of fires, Canada’s approach to wildfire management isn’t working
July 7, 2021
opinion
Enough with the cognitive dissonance. The wildfire that destroyed Lytton, B.C., could happen anywhere
July 2, 2021