Since its introduction last week, the federal Conservatives’ plan to fight the growing impact of climate change has been met with eye-rolling derision. The plan has been broadly portrayed as facile, vacuous and a cynical attempt to dupe a gullible public.

Other than that, the rollout went swimmingly.

You would think that this type of reception for a key piece of the party’s election platform would be met with stomach-churning concern. And yet Conservative Leader Andrew Scheer seems unperturbed by it all, seemingly confident voters will see things his way on the environment and not Justin Trudeau’s.

Mr. Scheer may be right.

But before we get to why that may be the case, let’s address why the Conservatives’ "A Real Plan to Protect the Environment” is nothing more than a sad joke. Their "plan” – and that word should always be placed in quotations – is a fraud. There is no commitment in it to meet the emissions targets set out in the 2016 Paris climate accord. There is an empty suggestion that the Conservative strategy gives Canada a better shot at meeting those objectives than the Liberal approach.

The plan says large emitters will have to meet as-of-now unspecified reduction targets. If they don’t, they will have to pay an as-of-yet unspecified financial penalty in the form of a contribution to a green technology venture or in related research and development. There are no numbers that predict how much this concept would reduce the country’s carbon dioxide (CO2) output, likely because it would be impossible to construct a reliable emissions model based on such meaningless drivel.

How would anyone posit a reduction goal based on a plan that relies, in part, on the success of technology that hasn’t even been invented?

The plan speaks about exporting Canadian carbon-capture technology as a means of reducing global emissions. But it doesn’t spell out how we get any credit for those emission declines, which are vital if we are going to meet our Paris pledge: a 30-per-cent reduction below 2005 levels by 2030. It’s not spelled out because no country in its right mind is going to say: “Oh, you guys take credit for the emission cuts we’re making in our country thanks to your technology.”

Not going to happen.

The Conservative plan has more holes in it than a fashionable pair of jeans.

It makes no mention, unsurprisingly, of the party’s plans to build more pipelines across the country and the impact that would have on emissions.

Or that a Conservative government under Mr. Scheer would repeal Bill C-69, the recently passed federal legislation that toughens environmental assessments. Or the fact that any costs incurred by industry for failing to meet their mandated emissions levels are most likely going to be passed down to consumers. Mr. Scheer’s climate action plan looks like it could have been written by the Canadian Association of Petroleum Producers.

It’s a document that can be best summed up in four words: not a carbon tax.

That is what the Conservatives plan to campaign on, not the flimsy contents of this climate strategy. They know that conservative leaders in other parts of the country have benefited politically by demonizing the carbon tax and he plans to do the same thing. Even if it means telling voters that the tax will hurt them where it hurts most – the pocketbook – while knowing it will do nothing of the sort because of the federal rebate that comes with it.

But truth is the first casualty of war and election campaigns.

Mr. Scheer can also read polls. And he would have delighted in a recent one done for CBC which indicated that while Canadians believe climate change is real and a growing threat, a majority aren’t prepared to make much of a financial sacrifice in the name of helping reduce our emissions.

He will go out on the hustings this fall and say that the Tory plan saves people from surrendering their own dollars while letting industry do all the heavy lifting – and he’ll do it with a straight face. Or a dimpled smile.

What is undeniable though is there is irrevocable proof that the planet is in real trouble. That it isn’t a problem; it’s an emergency. Climate change is the greatest threat the world has faced since the rise of Nazism in the early part of the last century.

Given the importance of this issue, given the havoc that will be unleashed if nothing is done, how depressing it is to realize that this sham of a document is the best the Conservatives could do. 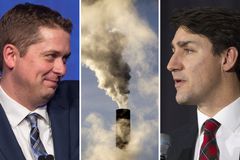