One of the reasons why the Democrats lost in 2016 was that they focused too narrowly on Donald Trump’s odious character as opposed to putting forth a positive new vision.

They’re in danger of repeating that mistake. Instead of making the driving imperative of their campaign a new way forward for the country on such issues as trade, income equality, guns, climate change and the like, they’re pinning their hopes on driving a stake through this presidency via the impeachment process.

If enough damning revelations pour in, they may well do that. But it’s a high-risk strategy – one that could backfire. House Speaker Nancy Pelosi had fought off demands within her party to go the impeachment route. Barack Obama’s top strategist, David Axelrod, warned just a few weeks ago that the way to defeat Mr. Trump was not to get in a mud fight with him. Let him defeat himself. But the whistle-blower revelations forced the Democrats’ hand, and they’re now in the dirt box with him totus porcus (whole hog).

To bring him down, they need something that transcends partisan allegiances. As Syracuse University’s Grant Reeher, author of The Trusted Leader, has said, the whistle-blower revelations aren’t really telling people anything they didn’t already know about Mr. Trump.

He’s the villain who has already been unmasked. The Democrats are preaching to the converted when they need more than the converted. “How many times,” Mr. Reeher said, "can you regenerate the outrage?”

There’s been two years of impeachment talk already, and now it sucks up all the oxygen again. By going with the old narrative, the Democrats play to a script – deep state elites out to get him – that this President has countered before and only hardens support from his base. Mr. Trump is vicious on the counterattack, at his best in the cauldron, his natural habitat.

The impeachment drive also threatens the standing of Joe Biden, the moderate candidate Mr. Trump appears to fear most. Given Mr. Biden’s controversial ties to Ukraine, the Republicans are flipping the script, attacking him as “Quid Pro Joe.”

The allegation is that he threatened to withhold U.S. aid to Ukraine if that country did not fire the prosecutor who was investigating the company that employed his son Hunter Biden to the tune of a very healthy income.

Though the case against the Bidens appears to be bogus, it doesn’t mean it isn’t damaging. By dint of repetition it is. Mr. Biden’s favourability ratings were already declining. His campaign has significantly reduced its digital ads, a signal to the media of troubles. Meanwhile, Senator Elizabeth Warren, the leftish radical the GOP prefers to meet, is surging.

Though polls show support for impeachment rising since the whistle-blower revelations, Mr. Trump’s personal support numbers are holding firm. Fellow Republicans aren’t moving away. Nor is his media propaganda machine.

Republican Jeff Flake, the former Arizona senator who often opposed Mr. Trump, says his actions merit impeachment. But he has grave reservations about going that route. “I fear that, given the profound division in the country, an impeachment proceeding at such a toxic moment might actually benefit a president who thrives on chaos.” Disunion, he points out, "is the oxygen of this presidency. He is the maestro of a brand of discord that benefits only him and ravages everything else.”

Ms. Pelosi tries to suggest the impeachment route is taking the high road. “The idea that this has anything to do with whether you like (Trump) or not – forget that. That’s about the election. This is about the Constitution.”

In her mind, maybe so. But not in the minds of the many who see it as pure politics. That it comes during an election year makes it all the more fraught. If the Democrats rush the process, it will look grossly partisan. Proceeding at a measured pace, they will run into myriad White House roadblocks, with the President claiming executive privilege, launching counter-investigations, threatening opponents (he tweeted that House Intelligence Committee chair Adam Schiff should be arrested for treason), creating fear and chaos.

With their majority in the House, the Democrats can win a vote to file articles of impeachment. That would be damning, maybe enough to sink Mr. Trump’s re-election chances. But a conviction in the Senate would require at least 20 Republican votes coming the Democrats’ way. That is unlikely. More likely is that Mr. Trump would win that vote and outrageously declare victory against an attempted deep state coup d’état. 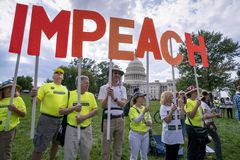 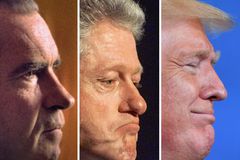