The reaction of his bosses at Eastman Kodak? “That’s cute, but don’t tell anyone about it.”

The notion that people would want pictures they could not hold in their hands and display on the mantle seemed preposterous. Not to mention that Kodak controlled roughly 90 per cent of the U.S. roll-film market.

Kodak did not market a digital camera until 1995 and it was late to the party. By 2012, the film market had pretty well dried up and the company declared bankruptcy.

“They were oblivious to their obvious bias. They failed to adapt,” Alejandro Jadad, founder of the Centre for Global eHealth Innovation at University Health Network in Toronto, said in the keynote address at the Canadian Medical Association (CMA) Health Summit last week.

Canada’s health system, Dr. Jadad said, is very much like Kodak in 1975, clinging rather pathetically to an analog way of thinking in an increasingly digital world. It is threatened by inertia.

The CMA health summit heard about a wide range of innovations that have come or are coming to health care.

There are basic technological innovations such as e-mailing your physician, booking an appointment online and accessing your health records electronically, which are still widely unavailable in Canada.

There are virtual visits – connecting to your health-care provider online, via computer or smart phone – but they still account for fewer than 1 per cent of doctors’ appointments.

There is remote monitoring – measuring vitals such as blood pressure, blood sugar and oxygen levels from home to avoid routine visits – which tends to be tested, over and over again, in pilot projects rather than being used on any large scale.

This is all 1990s stuff, yet, in Canada’s sclerotic health system, we still resist it.

The list of excuses is as long as it is predictable.

We are told that seniors, who tend to be the biggest users of health services, are intimidated by digital technologies. Yet, there is very little evidence to back up this patronizing assumption. On the contrary, few people would benefit more from innovations such as virtual visits and remote monitoring than frail seniors with mobility issues.

We are told that there are overwhelming privacy concerns with electronic communication. Again, this is bunk. If we can safely do our banking online, we can certainly manage health interactions.

We are also told that medicine must be face to face and hands on. But must it always? Many routine visits can be done effectively and efficiently online, without patients having to be inconvenienced by the inevitable hours spent in a waiting room. Besides, no one is suggesting that in-real-life visits be eliminated entirely.

Finally, we are told that digital health will throw the door open to privatization – the ultimate Canadian conversation stopper. What makes purchasing private care look attractive is not technology, but the lack of choice and efficiency in the public system.

What technology does is to empower consumers. It may also cost doctors and hospitals in dollars and power.

We have seen the digital revolution transform the banking and retail sectors. Those changes – to access, convenience and price – are long overdue in health care, too.

We are entering an era of personalized medicine, where we can decode the genome at little cost and perhaps edit our DNA as readily as we do software.

We are seeing mind-boggling advances in artificial intelligence that will allow us to monitor disease progression and treatment in real time, and then use that data to tweak and individualize care.

There have been experiments where they have simulated surgery on Mars using 3D-printed surgical tools and untrained staff. Nanobots, that can be swallowed like pills, can do diagnostics and may soon be able to do repairs.

All of these advances point to a very different world of medicine in the very near future. But the new tools need to be deployed appropriately and equitably.

The way forward is not insisting that the analog way of doing things is still better than the digital, by claiming change is too disruptive or expensive, or by fearmongering.

Technology is going to change the patient-clinician relationship. Ideally, it should free clinicians of some technical demands and allow them to focus on what matters most to patients – compassion and connectedness, things that machines can’t always deliver.

Massive change is coming to health care. It’s no longer a question of whether, but when and how.

We can no longer afford our Kodak-like “don’t tell anyone” attitude. 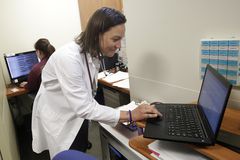