The images of tens of thousands of women out on the streets in deeply Catholic Argentina, jubilantly celebrating the law passed last week that decriminalizes abortion through the 14th week of pregnancy, seem to have caught the world by surprise. But that outpouring makes sense in the context of Argentina’s feminist movement, which, over the course of 13 bill proposals and 18 years of struggle against conservative religious mores, has persisted to get the legislative debate under way. Argentina is now the fourth country in Latin America to legalize abortion, following Uruguay, Cuba and Guyana.

In particular, the “Green Wave” – named after the green handkerchief that has become the intersectional movement’s uniting symbol, which was itself inspired by the fabric worn decades ago by the mothers and grandmothers of the Plaza de Mayo who searched for children and grandchildren who had been killed at the hands of the ruling military dictatorship – has become a force in recent years. In 2018, the Green Wave prompted Argentina’s government to propose legislation decriminalizing abortion, though it would go on to be defeated by a slim margin in the Senate. But I remember strolling through Buenos Aires in the middle of that night, knowing with certainty that even if abortion hadn’t been decriminalized in the parliament, it had been in the minds of many in the streets.

One year later, Argentine President Alberto Fernandez added the issue to his list of campaign promises, and the reform was subsequently broken into two legislative proposals: the “Thousand Day Plan,” which protects motherhood by extending social protections for the first 1,000 days of a child’s life, and the decriminalization of abortion.

This achievement is crucial, because Latin America and the Caribbean criminalizes abortion more than any other region in the world. Here, women die from unsafe practices during clandestine abortions, while young girls who are victims of serious sexual violence are forced into motherhood. During the COVID-19 pandemic, the situation has grown even more dramatic; women and girls are stuck at home, where domestic violence has risen and governments have done little to respond to their needs. Yet we have found hope in the Green Wave – hope that will not ebb away just because abortion has been decriminalized in Argentina. Other Latin American and Caribbean countries now face the long day after.

Our current concern is to ensure that public-health services implement the law: All women and pregnant persons must have equal protection under the new legislation, and this can only be guaranteed if abortion services are free and universal. At the same time, we hope our intrepid joy will converge with the resistance of other women in the region, including in Colombia, Mexico, Chile and Brazil, where women have also adopted the green handkerchief.

For instance, in response to Argentina’s new law, Brazil’s Jair Bolsonaro tweeted that so long as he remains President, the country would not decriminalize abortion. Quite the contrary, his intent is to further criminalize the practice to include situations arising from rape or when a woman’s life is at risk, which are currently exceptions under Brazilian law. But he was rebuked by Ofelia Fernandez, the 20-year-old member of the Buenos Aires City Legislature who is the youngest woman ever elected to public office in Latin America and the Caribbean and a daughter of the Green Wave: “Just great, this opinion nobody asked for, I suggest you don’t get comfortable, because the Latin American feminist force in Brazil is joining the rage over Marielle,” Ms. Fernandez declared on Twitter, referring to the killing of Brazilian politician Marielle Franco in 2018. “Good luck, this is just getting started.”

A new generation in Latin American politics is being defined by feminist women and their challenging of white male political authoritarianism, a heritage from our colonial past. It is being defined by the coming-together of struggles for rights that had once operated separately: issues around abortion rights, racism, poverty, violence against women and sexual diversity.

And so our joy comes from a moment in history when, with an Argentine Pope, secular public reason has reigned supreme, guaranteeing women’s reproductive rights. Our joy is born of hope – the hope that we may one day live in a world with less oppression, and one much greener. Ms. Fernandez is right: This is just getting started. 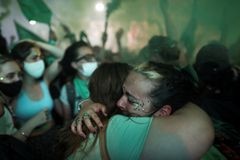 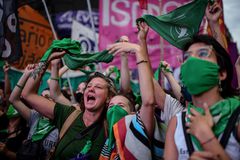