Alison Motluk is a Toronto-based freelance writer and broadcaster. She publishes a weekly newsletter, HeyReprotech.

A turning point in my first pregnancy came toward the end of the second trimester. My husband and I were touring the facilities at the local hospital, as you do, and it slowly dawned on us why the maternity ward was scheduled for a reno. The labouring rooms, a pod of four separated only by curtains, were the size of closets. The delivery room, some distance down the hall, was an antiseptic operating theatre, with what looked like blazing stage lights overhead.

"Those can be dimmed, right?" I asked. The guide chuckled.

I turned to my husband. "We have a dimmer switch in our basement."

And so, in Week 26, I decided I was going to give birth at home, in the comfort of my basement and my very own dimmed lights.

My midwives did not blink at this news. Seamlessly, they changed tack with me. They reminded me of the supply list they’d provided some weeks earlier – items needed for home birth that they gave to all women, just in case – and they matter-of-factly outlined the added perils of giving birth at home. They agreed that, since I had an abundant supply of red blood cells and no special risk factors, I was a good candidate. It was up to me.

Let me repeat that wondrous line: It was up to me.

We talk a good line these days about patient-centred care, but midwifery is where it can actually be seen in play, at its best, every single day. Midwives are the models. They listen, they modify, they adapt – they collaborate.

You can imagine my fury when I heard late last year about the proposed retroactive cut of some $800,000 in operational funding to the College of Midwives of Ontario, the professional body that regulates the practice of midwifery in the province. Future funding of same, the Ministry of Health and Long-Term Care said, would not be forthcoming.

There are fewer than 1,000 midwives in Ontario today. For such a small group to finance a professional college is hard. At the same time, regulating midwives is widely recognized as a public good. So for 25 years, the provincial government has been pitching in on the operating expenses. Now, apparently, they don’t want to do that any more. (I’m happy to learn they are reconsidering.)

If the cuts go ahead, it would probably mean that midwives will pay significantly more in fees to maintain their college. The blow came just weeks after the Human Rights Tribunal of Ontario upheld a claim by midwives that they have for years been systematically underpaid. (Midwives are mostly women, treating patients who are mostly women, dealing with health issues that pertain to women – you get the picture.)

The proposed cuts don’t make sense. We should be championing midwifery, not undermining it. We should be emulating it, not compromising it. At the core of midwifery – and at the core of any real patient-centred care – is a commitment to treat the patient as a partner in her own care.

In the case of pregnancy, I’m the one carrying this fetus and I’m the one who has to expel it. My midwives were genuinely interested in my thoughts on how that might best be achieved. They trusted my own account of myself, my concerns, my stamina, my resolve. They understood that I had an idea of how I wanted this experience to unfold – and that it might be different from some other woman’s idea.

Partnership and trust were not just in the planning stages, but in the execution, too. They showed up at 6 a.m. on birthing day. They stayed for the whole event. As the hours dragged on, they trusted me when I said I wasn’t too tired, wasn’t in unbearable pain, wasn’t unable to go on. So we continued. And because I knew they trusted me, I trusted them. I knew that if they said it was time to continue in hospital, that’s what we would have done. I knew any decision they made would be a decision that took my desires and goals fully into account.

In birth, of course, if all goes well, another patient will emerge during the process. Another miracle of midwifery is that they manage to keep two very important yet sometimes conflicting goals top of mind: give the mother as much autonomy as possible and get the baby safely into the world.

And so it was for us. My eldest daughter was born one afternoon almost 18 years ago. One of the midwives sang to her softly during her first minute of life. We were in our basement. The lights were low.

In Ontario, midwives help with the rebirth of Indigenous pregnancy care
August 10, 2018 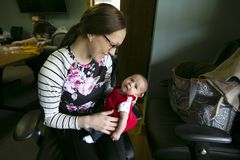