Last week, when the fires in Brazil’s Amazon took brief control of the news cycle, the Western world responded with its own collective gust of hot air. Exhibit A was the pitiful US$20-million emergency package offered by Group of Seven leaders (and promptly rejected by Brazilian President Jair Bolsonaro), an amount that called to mind Dr. Evil’s gleefully deluded demand for “one meellion dollars” in the movie Austin Powers. The seven wealthiest countries on Earth extract US$20-million worth of resources from Brazil every minute; Canada’s mining industry alone holds more than $10-billion in Brazilian assets.

If that offer was an embarrassing insult, the mooted idea of sending in “multilateral green helmets” – inspired by the United Nations’ “Responsibility to Protect” doctrine, drafted in the wake of the Rwandan genocide – amounted to a misguided, empty threat. On a continent still grappling with the legacy of Western imperialism, no righteous foreign army is going to be welcomed by anything other than a fusillade, no matter the colour of their helmets.

Besides – and here’s the biggest blind spot of all – if the international community is going to start enlisting ecowarriors to save the planet’s trees in the name of fighting climate change, Canada had better get ready to be invaded, too.

That’s because our borders happen to contain the second-largest intact forest on Earth after the Amazon. It’s called the boreal and it’s been emitting more carbon than it absorbs since 2002. This is partly because of a logging industry that mows down more than 400,000 hectares of it each year, mostly to supply the United States with Kleenex and toilet paper. These clear-cuts release 12 per cent of the annual emissions Canada has agreed to cut by 2030 under the Paris Agreement. They also put us in third place for intact forest loss, accounting for 15 per cent of the global total, behind only Russia and Brazil – in fact, on a per capita basis, we lead them by a large margin.

But the main reason our boreal has switched from carbon sink to source isn’t logging, at least not yet. It’s fire. And the main reason forest fires are on the rise is climate change. Some might say this is out of our control – that, unlike in Brazil, our elected leadership is not encouraging a destitute citizenry to slash and burn its way to prosperity. But blaming climate change does not exonerate the world’s fourth-largest producer of oil and gas.

According to a 2018 study published in the journal Ecosphere, Canada is headed for a fivefold increase in the area burned by forest fires by the year 2100. Some regions will be hit harder than others, but none harder than Alberta. That same study predicted that the seat of our oil and gas industry will see fully half of its forest converted to grassland by the end of this century thanks to fires and a drying climate that will inhibit regrowth. If this seems hard to imagine, cast your mind back to the distant reaches of last summer, when it wasn’t the Amazon in the news but our own forest fires, which blanketed swaths of Western Canada in smoke.

Those fires vaporized 1.2 million hectares of B.C.’s forest and dumped almost 200 million tons of CO2 into the atmosphere, dwarfing the province’s hard-fought emissions reductions. The same thing happened the summer before. But head all the way west, to British Columbia’s lush coast, and you’ll finally reach the scene of Canada’s greatest forest crime: Our continuing desecration of the last stands of ancient temperate rain forest, not just in Canada but the world.

No words or pictures can convey the experience of entering a forest whose trees are a thousand years old. But words and pictures are just about all we have left, because we’ve cut 80 per cent of those trees down already.

On B.C.’s northern coast, the Great Bear Rainforest agreement marks a notable exception. In this enormous tract of forest, much of the remaining old growth is now protected. That’s worth celebrating. But it doesn’t excuse the fact that, throughout the southern coast and all across Vancouver Island, 90 square kilometres of old growth is still being logged each year. Rather than put a stop to it, the provincial government announced this summer that it would spare 54 of the most ancient individuals, as identified in the province’s “Big Tree Registry.” If there’s a better example of not seeing the forest for the trees, I’d like to hear it.

Unlike the Amazon, these forests lie within our jurisdiction. We don’t need foreign aid or armies to protect them and all they protect. We just have to see them. 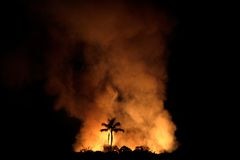 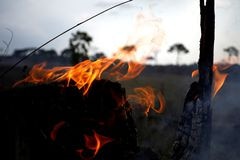