Brahma Chellaney is a geostrategist and the author of the award-winning Water: Asia’s New Battleground.

The blossoming of the U.S.-India strategic partnership has become an important diplomatic asset for both countries, which explains U.S. President Donald Trump’s just-completed stand-alone trip to India. Mr. Trump’s visit, like that of his predecessor Barack Obama five years ago, may not have yielded any major agreement, but it has set the direction toward greater U.S.-India collaboration in the face of a growing China-Russia alliance.

Mr. Trump, who was accompanied by his wife, daughter, son-in-law and a high-powered official delegation, summed up his trip as “unforgettable, extraordinary and productive.”

However, Hindu-Muslim rioting in an outlying, working-class Delhi area cast an unflattering spotlight on sectarian tensions in India during Mr. Trump’s second day in the world’s largest democracy. Even before Mr. Trump set foot on Indian soil, sections of the American media lampooned him – from claiming he was going to India for big crowds because he “relishes spectacle” to wondering how the steak-loving President, who supposedly had never been seen to “eat a vegetable,” would survive in India with its beef-free menu.

The communal violence, triggered after a Hindu politician issued an ultimatum for an end to Muslim protesters’ blockade of the suburb’s main highway, occurred principally over two days and left nearly three dozen dead. The blockade, which also forced the shutdown of local subway stations, appeared timed to coincide with Mr. Trump’s visit to highlight opposition to India’s recent amendment of a decades-old citizenship law. The amendment offers a fast-track to citizenship for members of all religious minorities who fled persecution in three neighbouring countries where Islam is the state religion: Bangladesh, Pakistan and Afghanistan.

The rioting, restricted to the blockade-hit neighbourhood (which is in Delhi state, but not part of New Delhi), came in handy to those seeking to obscure the gains from Mr. Trump’s visit. New Delhi Streets Turn Into Battleground As Trump Visits, ran the hyperbolic headline in The New York Times, whose relentless attacks on Mr. Trump surpass its perennial India bashing.

Mr. Trump’s unaffected tour was packed with colour and pageantry, including a visit with his family to the monument to love, the Taj Mahal. Mr. Trump, in fact, kicked off his whirlwind tour with the largest rally any U.S. president has addressed in recent memory.

The huge campaign-style rally at the world’s largest cricket stadium in Ahmedabad – Prime Minister Narendra Modi’s home base – was attended by some 125,000 people, with countless thousands more lining Mr. Trump’s motorcade route from the airport to the newly constructed stadium.

After the royal pomp and pageantry lavished on him from Ahmedabad to New Delhi, Mr. Trump exulted, “Nobody else that came here got the kind of reception we got.”

The trip was not without substance. It yielded a US$3.4-billion military helicopter contract, the latest in a string of major U.S. arms sales to India in recent years. The United States has become India’s largest weapons supplier, with the two countries also holding more frequent joint military exercises. As Mr. Trump put it before leaving India, “I believe the U.S. should be India’s premier defence partner and that’s the way it’s working out.”

The two sides announced they have almost finalized a limited trade agreement, which will be ready for signature after legal vetting. The agreement is to serve as “phase one” of a comprehensive trade pact.

Under Mr. Trump, the U.S. has become an increasingly important source of crude oil and petroleum products for India, the world’s third-largest oil consumer after the U.S. and China. Mr. Modi has agreed to further ramp up imports of U.S. oil and gas to help cut India’s large trade surplus with the United States.

India is important for the U.S. because of its massive market and strategic location. It is the only resident power in the western part of the Indo-Pacific region that can countervail China’s military and economic moves. For New Delhi, a robust relationship with the U.S. is pivotal to advancing long-term interests. Despite bilateral differences over the Pakistan, Afghanistan and Iran challenges, the U.S.-India partnership, as Mr. Trump noted, “has never been as good as it is now.”

Mr. Trump’s personal diplomacy with Mr. Modi has stood out. Both are right-of-centre nationalists who have faced similar criticisms, including accusations of being blinkered demagogues, pursuing divisive policies and choosing populism over constitutionalism.

Indeed, each has become an increasingly polarizing figure at home. Citizens either love or loathe them. And like the Washington establishment’s antipathy to Mr. Trump, the privileged New Delhi elite has never accepted Mr. Modi.

Mr. Trump’s critics at home say that, under his leadership, the world no longer respects the U.S. or the American president. Mr. Trump’s adulation-filled India visit showed otherwise. Mr. Modi’s domestic critics claim he is isolating India and making it less tolerant. Mr. Trump’s solo visit to India – and the praise he lavished on India’s tolerance and freedom and on Mr. Modi’s commitment to religious freedom – showed otherwise.

During the visit, Mr. Trump and Mr. Modi consciously eschewed saying anything that could give a handle to each other’s domestic critics. For example, asked about the amended citizenship law, Mr. Trump said it was India’s internal matter.

The two, however, heaped praise on each other. Mr. Trump called Mr. Modi a “great leader,” saying he is “a very, very strong person, very tough” and “he’ll take care of” the terrorism problem facing India. Mr. Modi, for his part, called Mr. Trump a “true friend of India.”

The eventful visit will be remembered for Mr. Trump’s famous words at the mega-rally that were greeted with thunderous applause: “America loves India, America respects India and America will always be faithful and loyal friends to the Indian people.” 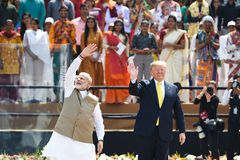