Benjamin Shinewald worked in the Winnipeg Jets front office before the team moved to Phoenix.

In other words, the Winnipeg Jets’ moment as Canada’s hockey team was a very long time coming.

Winnipeg bottomed out in 1996 when the Jets left for Phoenix. The small market’s working-class fans just couldn’t support an expensive, modern NHL team, so the team departed.

So, too, everyone thought, did the city’s future. Its best and brightest sought greener pastures elsewhere, and there was open talk of Winnipeg actually dying. The future was bleak.

It took time for the city to get back on its feet. Hosting the 1999 Pan Am Games was a key turning point, as Winnipeggers showed the world – and themselves – that they still had what it takes to put on a first-rate show. The success of the Pan Am Games created a nascent optimism that began to nudge away the deeply pessimistic recent past.

From there, things improved further with a touch of faint hope that, one day, maybe, the Jets really could return to Winnipeg.

The fact that Manitoba is the Steady Eddie of the Canadian economy likely helped a great deal. Largely immune to the booms and busts that plague provinces to its east and west, Manitoba’s economic performance typically has Canada’s shortest peaks and shallowest valleys. Slow and steady may be dull, but it builds modest, enduring prosperity.

Not for all Winnipeggers, mind you. There are still many in the city who lag behind, including sizable parts of the city’s large Indigenous community, some of whom live in deplorable conditions. This is a terrible stain on an otherwise impressive recent economic record.

But other groups in Winnipeg are currently thriving, and they are at the heart of the city’s success.

Nearly one in 10 Winnipeggers is Filipino, and that community’s extraordinary work ethic drives municipal growth, as do large numbers of hard-working Portuguese, South Asians and others. Mixing these groups with established Jewish, Ukrainian and British-descended communities has yielded impressive industriousness.

And so, for the first time in ages, Winnipeg has a modest building boom, with new office towers rising downtown, cool lofts popping up along its expansive waterfront and the breathtaking Canadian Museum for Human Rights towering proudly above it all.

The generation which left in the bad old days of Winnipeg is not returning, not to live at least. But they have formed a genuine diaspora. Like so many other diasporas, their passion for their ancestral homeland, so to speak, often feels far more intense to them than to those who live in Winnipeg today.

This explains why nostalgia is such a dominant force in Winnipeg’s already well-developed mythology. Everyone seems to yearn for a past where you popped by Kelekis Restaurant for a hot dog before catching some new band called the Guess Who.

But nostalgia, of course, is just a wistful desire to return to a past that no longer exists.

The good news is that the present is plenty enticing in Winnipeg.

The Jets returned in 2011, resuming their status as the NHL’s smallest-market team.

Winnipeggers erupted in joy and instantly came into their own. No one, however, predicted that their exhilaration would endure unabated year after year, or that, just seven years later, the Jets would come tantalizingly close to winning the Stanley Cup.

Nor could anyone have predicted that the Jets would become a roving rallying point for former Winnipeggers (if there is such a thing) everywhere. Winnipeggers past and present show up at every single Jets road game, wildly rooting for their team and reconnecting with fellow ‘Peggers in the intermission. A Jets road game is part hockey, part hometown reunion.

Back home, Bell MTS Place remains the smallest and loudest rink in the NHL. When they return next year to resume their quest for the Stanley Cup, it will be louder still.

Winnipeggers just can’t stop cheering their hearts out for their team – and for their city.

Jets eliminated from playoffs after Game 5 loss to Golden Knights
May 20, 2018 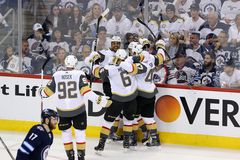 Money really isn’t everything: The surprising new ranking of Canada’s happiest - and most miserable - places to live
May 20, 2018 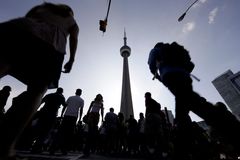