Lori Fox is a writer based in Whitehorse.

Stripped both of structure and spontaneity, a day could feel like a week and a week like a month, yet two hours could evaporate in a puff of anxiety as you googled COVID-19 symptoms and compulsively streamed The Great British Bake Off. It was always 7 p.m. on a Sunday, no matter what day of the week it actually was. Confined inside for days on end, you came to loathe the colour of your bathroom, the texture of your carpet, the sound of your upstairs neighbour walking above you. No matter how essential the errand, leaving your home made you feel both anxious and guilty.

Now, the game is changing again. For better or for worse, things are reopening; Toronto, one of the hardest hit cities in the country, recently entered “stage three,” meaning bars, movie theatres and restaurants are open. Although everything still has a faint, palpable air of dread – the lull in a horror movie where the plucky teens foolishly believe they’ve escaped the monster and the viewer, helpless, is just waiting for it to come crashing back on screen – the stranglehold of total social isolation is loosening for many people. The fear and worry and loneliness are still there, but blunted by changing circumstances and normalization.

But that other thing, that quieter ache – that smouldering coal deep in your chest you fear would ignite and devour you if you dug it out and examined it – that’s still there. If anything, that pain might be sharper, more acute than before.

That feeling is grief.

We can go out and get a coffee, we can walk in the park, we can drink a beer on the patio, but it doesn't really matter.

The world we knew is gone.

The life you thought you were going to have is gone.

The lives we all thought we were going to have are gone.

Since COVID-19 first emerged sometime toward the end of 2019, more than 741,000 people have died and 20 million have been infected, with 121,000 infections in Canada alone. With people locked into their homes, sick or afraid of getting sick, the economy came to a grinding halt, a shockwave of lost jobs and reduced or redistributed consumer spending. Canada lost around two million jobs in April, with the hardest hit – outside of people who were already un- or underemployed – being low-wage workers, of which women and younger people comprise a large portion, groups that were already at an economic disadvantage in the Before.

Those jobs aren’t just going to just magically reappear as we reopen; COVID-19 has reshaped consumer demand and will continue to do so into the future. Many small businesses – restaurants in particular – are permanently closed, and it will take time for something to replace them, if such a thing will even be possible in the near future.

More importantly, this pandemic has kicked open the factory doors of our culture and allowed us to see how the sausage is made: on the backs of the people whose labour, time and bodies we deem to be worth at or around minimum wage, but without which we absolutely could not – cannot – make it through this crisis.

Current conversations around the “safety” of going back to work right now are simply not for the lower classes. While many middle and upper class people worked from home, working class wage earners – grocery store clerks, delivery drivers, food and agriculture folk – continued on as “essential workers,” dispensing and producing the goods and services on which our entire culture runs, all the while risking continuous public exposure. They went to work – and continue to go to work – because they have to, and will continue to have to, even as we see infections spike, something we should prepare to happen, given what we are seeing in other nations, such as Germany and Australia.

For the working class who have lost their jobs due to the pandemic, discussions around CERB – which some claim is a disincentive for people to return to work – and how some people, particularly millennials, spend that money, only serves to make the deep-seated class divide in this country more apparent. If $2,000 a month – about $12.50 an hour, or around $24,000 a year before taxes for a full-time worker – means that people are making more money than they were before, the problem is not CERB, but that workers are not fairly compensated for their labour with a living wage. Anyone who would weigh in critically on how that money is spent, moreover, should ask themselves if they believe that only the wealthy deserve financial autonomy, and the pleasure and dignity of human comforts, or if CERB is really just a subsidy for landlords.

That these are even conversations to be had demonstrates a tremendous failure of understanding – and compassion – about the realities of working class life, and the message it sends is clear: Get back to work, plebes.

The destabilizing effect of this pandemic has laid bare the economic inequality on which our society functions. Class disparity, the resistance to universal income, systemic racism, the militarization of the police and the rhetoric of the current political climate are not the result of the pandemic; they are the endgame of capitalism. We’ve merely paused the machine long enough to see them clearly.

This is my own tiny, selfish dream:

I want to meet a nice femme and get married and have a modest house with a little yard. I want to make my future wife coffee in the morning and kiss her goodbye, and go off to work writing articles and books, because it’s a useful occupation that makes me happy. I want to take my breakfast in a diner on Sundays while I read the paper, and make my wife laugh, and put butter on hot, fresh bread, and throw a ball for my dog. I want a couple fingers of whisky, clean sheets and a book when I go to bed at night.

My dream, in short, is to have enough, with the time to enjoy it. To have a life that has love and dignity.

It’s so small, when you say it like that, but for so much of my life it has seemed impossibly out of reach. At the beginning of March, things were finally starting to look up for me; that dream felt a little bit closer. When the pandemic hit, every certainty I had worked so hard to build for myself was swept from the table.

Now, here in August, that dream feels even further away than before. I don’t know what your own little dream is, but it probably feels distant – perhaps even unreachable – now, too.

I’m really sad about it, and I think we should be allowed to be sad right now.

Grief is a chance to get a hold of that hurting thing, to look at it fully and carefully, to take what’s left of what you’re grieving for and make it into a part of yourself you can take with you.

Grief isn’t about expulsion and denial. It’s about consumption and reflection.

Things are scary. We are allowed to be anxious and afraid right now.

We have lost a world. You’ve got permission to grieve.

What we are seeing, now, in this crisis, is a perfect distillation of that, of the ways the world before did not serve – did not care about – everyone equally. This is a chance to rethink that; perhaps not only can we not return to the world before this, but maybe we don’t really want to.

Capitalism demands constant, accelerating growth; a black magic trick that flies in the face of nature, in which no such thing exists. Even SARS-CoV-2 – itself a phenomena of nature – must adhere to these rules, and in many ways the virus is a metaphor for capitalism itself. It seeks perpetual increase without regard for the host organism, and eventually it will reach a point where it can no longer continue its present rate of infection; either it will use up all its resources (all the host organisms are all already infected or dead) or it will be contained or even eradicated by adaptations on the part of the host (that’s us).

That we see, plainly, how fragile and unfair our way of life really is, is part of the collective grief. Even if we did all agree to go back to the way things were, they can never actually really be that way; the illusion has been dispelled.

So go ahead and grieve now. Think carefully. Fill in the holes the world before has left.

Be good to your neighbours and friends. Take care of them as best you can. Don’t let them go without, if it’s possible. We’re going to need each other more than ever. 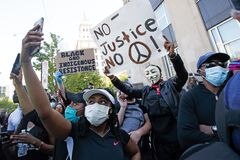 Opinion
The COVID-19 pandemic could make us healthier in the long run
August 7, 2020