Quebec’s first English-language election debate in three decades was a very big deal – in French Quebec. Among anglophones, who will still vote Liberal in Soviet-like proportions, not so much.

Indeed, Monday’s televised debate between Quebec’s four main party leaders seemed to spark far more interest among francophone commentators than anglophone voters. The latter insist they’re open-minded, but the vast majority will mark their ballot on Oct. 1 as they always have. The Liberals will sweep English-majority ridings with 70 per cent or more of the vote.

This time was supposed to be different. The first election in more than 40 years that has not in some way been about sovereignty was supposed to have liberated non-francophones, who had long considered themselves hostage to the federalist Liberals. Finally, anglos could consider their options without the threat of a referendum on independence hanging in the balance.

Against that backdrop, the proposal for an English-language debate seemed perfectly defensible. If the anglophone vote was up for grabs, anglos needed to be able to evaluate the party leaders on the issues in their own language.

What was so controversial about that? Plenty, it turned out.

Since the adoption of Bill 101 in 1977, French has been Quebec’s sole official language. When Manon Massé, the co-spokesperson for the far-left Québec Solidaire, mistakenly declared at the outset of this campaign that English was also an official language in Quebec, she inadvertently revealed an awkward truth. For all the militancy of Quebec’s language hawks, they have not succeeded in squeezing English out of its dominant position in many spheres of public life.

English remains the default language in almost any social or professional setting that includes at least one anglophone. There’s nothing scandalous about that. But it does illustrate the disconnect between official policy and sociological reality.

Not even the most ardent Québécois language purists ever expected Bill 101 would lead anglophones who remained in the province (after the mass exodus of the late 1970s) to embrace French. But it was hoped that younger cohorts of Anglo-Quebeckers would demonstrate more openness to Québécois culture, while new immigrants would choose to integrate into French-speaking society, especially since their children could no longer attend English public schools.

It hasn’t exactly turned out that way. While optimists like to point out that anglophone Quebeckers now overwhelmingly claim to be bilingual – which was decidedly not the case back in 1977 – pessimists counter that the quality of French spoken by Quebec anglos remains shaky. Indeed, during Monday’s debate, one young questioner who had gone through Quebec’s English school system lamented that many like her are forced to leave the province for work because their French is just not up to snuff. So much for the image of effortlessly bilingual young anglos.

Unfortunately, the English debate confirmed for many francophones that the other solitude remains as insular as ever. For the most part, it reinforced the notion that francophone and anglophone Quebeckers still live in parallel universes. And it only hardened opinion among influential francophone commentators that more needs to be done to promote French.

According to the 2016 census, 79.1 per cent of Quebeckers declared French as their mother tongue, while 82.7 per cent said they most often spoke French (or French and another language) at home. While that suggests French is holding its ground, many francophones insist it shows the opposite – that non-francophone immigrants are still choosing to integrate into English society. That is why they felt holding an English debate sent the wrong message and undid decades of hard work to establish French as the common public language.

“Holding a debate in English is the best demonstration yet that it is not necessary to learn French in Quebec. Everything ends up being offered in English,” former Action démocratique du Québec leader-turned-pundit Mario Dumont wrote this week in Le Journal de Montréal.

Francophones, Mr. Dumont warned, are even losing the "children of Bill 101” who have attended French school. “If you speak to them in French at work, they will respond in excellent French,” he wrote. "But if you follow them for a week, you’ll see that – home, work, radio, TV, movies, shopping, reading – everything takes place principally in English. They live in English.”

So, while sovereignty has disappeared (for now) as an election debate topic, the linguistic dividing lines in Quebec politics remain nearly perfectly intact. And instead of breaking down barriers, the English debate ended up underscoring them. No one emerged a winner. 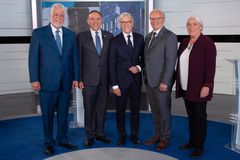 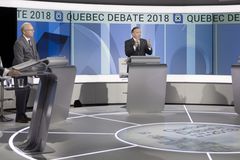 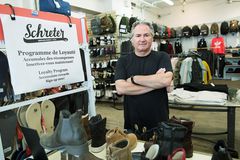