Alidad Mafinezam
Contributed to The Globe and Mail
Published June 15, 2021 Updated June 15, 2021
Text Size
Please log in to listen to this story. Also available in French and Mandarin. Log In Create Free Account

Alidad Mafinezam is the president of the non-profit organization West Asia Council.

The June 6 pickup truck attack in London, Ont., which took the lives of four members of the distinguished Afzaal-Salman family and sent a fifth – a child – to hospital, is now being prosecuted as an act of terrorism.

The brutal attack on fellow citizens, allegedly targeted for their identity and faith, has been a wake-up call and has shaken up Canadian society, prompting vigils, memorials and soul-searching across the country. It has led to renewed calls for direct government and social action and more ambitious programs to combat racism and bigotry in all their forms.

Canada has witnessed a spate of targeted killings of observant Muslims in the past few years: in Quebec City in 2017, in the Toronto area last year, and now allegedly in London. Homegrown hate, we have been reminded once more, lurks insidiously under the skin of a country known for its peace, prosperity and diversity, qualities that have made it a magnet for immigrants and host to an increasingly diverse population.

The recent tragedy directly touched three generations of the Afzaal-Salman family. Fayez Afzaal, a nine-year-old boy, is on the road to full physical recovery. The accused is alleged to have mowed down his parents, older sister and grandmother as Fayez narrowly escaped death. It happened within walking distance of their home, in a solidly middle-class neighbourhood in northwest London, as they waited to cross the street during a routine evening stroll. The boy’s psychological recovery, on the other hand, will be a long and arduous struggle. The attack on his family has naturally made racialized people and religious minorities more wary and runs the risk of pushing many further into their own enclaves, deepening fear and social fissures.

Since the attack, many prominent Canadians have opined that we must more openly acknowledge and better detect Islamophobia and other forms of hate and racism in this country, then work together to contain and defeat these maladies through greater vigilance and more effective communication. Law enforcement, all levels of government, workplaces and schools must become more inclusive and must provide new plans and programs to better protect Canada’s immigrant and racialized communities.

Yet while pushing back forcefully against hate, becoming more vigilant and embracing a robust defensive posture are all necessary, they are not sufficient. We also need a pro-active national outreach strategy involving the public, non-profit and education sectors, including places of worship, to build bridges between diverse and disparate communities and promote respectful intercultural and interfaith dialogue and deeper engagement.

A new Canadian interfaith commission can serve as a focal point for creating spaces that allow communities to lower their guards, interact with and learn from others of different backgrounds. A network of community centres and welcoming spaces, as well as new platforms of engagement and collaboration, must be designed to focus on this task.

Canada is a rich and diverse mosaic, but its multitudes must be encouraged to engage and interact with one another more substantively and more frequently. Too many of us are isolated from other communities. As a default option, keeping a safe distance from those of different backgrounds can only offer an incomplete and fragile sense of security. All communities, irrespective of background, must emerge from their self-imposed cocoons and become more inclusive.

Scores of mosques, churches, synagogues, temples and civic institutions across the country must be invited to join such an effort at substantive dialogue, making it a habit to engage and learn from each other on a more regular basis, even if it brings up difficult and uncomfortable emotions. The recent attack can’t be allowed to further divide people and communities from one another. Instead, we must work on promoting unity and solidarity, for which there is an urgent need in Canada’s increasingly diverse society.

Two days after the London attack, in a rare show of unity, many of Canada’s top political leaders, including Prime Minister Justin Trudeau and his opponents on the right and the left, came together as they gathered at the ornate London Muslim Mosque to show their sympathy and solidarity with the city and its growing and increasingly prosperous Muslim community. Many thousands from all walks of life came to show their support, filling numerous blocks around the mosque on Oxford Street, which had been closed to traffic. We must capture the mood of unity and sympathy that filled the air that day and use it to bind people together in a common quest to build a more peaceful and accepting country. Much like the memory of the victims of the attack, such energy and hope must never be allowed to dissipate. 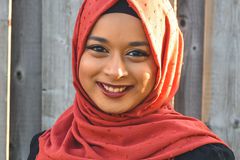