John McGarry is a Canada Research Chair in the department of political studies at Queen’s University.

Northern Ireland has just experienced more than a week of loyalist riots, its longest period of instability since the Good Friday Agreement was reached in 1998. The riots have produced some “echo” unrest in nearby republican areas, which raises the prospect of a dangerous descent into inter-community violence.

The police have attributed the violence to criminality in loyalist areas – where Protestants and unionists live – and to the manipulation of gullible youth by cynical paramilitary forces. Unionist politicians have blamed the police for not prosecuting republican (nationalist) politicians for breaching COVID-19 distancing regulations at a republican funeral last June – even though the police don’t decide who to prosecute.

Whatever role these factors have played, the main cause is a single word: Brexit.

Brexit was opposed by a majority in Northern Ireland, but it was imposed on the region (and on Scotland) by the votes of English nationalists in a U.K.-wide referendum in 2016, and came into effect earlier this year.

In Ireland, Brexit sparked a debate over where to place the border that would be needed between the European Union and the U.K. for customs and regulatory checks. The EU and the Republic of Ireland insisted, along with nationalists in Northern Ireland, that this border could not be a land border between Northern Ireland and the Republic. The deal that U.K. Prime Minister Boris Johnson negotiated instead placed the border in the Irish Sea between Ireland and Britain. Customs and regulatory checks are now taking place in the ports of both islands. This, and strong rhetorical opposition to it on the part of Northern Ireland’s unionist politicians, accounts for the rioting.  Loyalists now see themselves as having been placed, as one of their leaders once put it in a different context, on the “window ledge of the Union.”

Ironically, many of these same politicians, in the Democratic Unionist Party (DUP) in particular, were in favour of Brexit in the first place. Some of them may have relished the possibilities that it provided for establishing a land border between Northern Ireland and the Republic of Ireland. When former U.K. prime minister Theresa May came up with a compromise that would have dramatically reduced the problem by keeping all of the U.K. in the EU’s customs union, the DUP opposed this. Instead, it threw in its hand with the English nationalist wing of the Conservative Party, including Mr. Johnson, who rejected Ms. May’s compromise. The DUP was in a seemingly strong position at the time, because the Conservative Party depended on it for its governing majority. But when Mr. Johnson won a landslide majority in December 2019, he promptly betrayed the DUP by agreeing to the current arrangements.

The DUP’s Brexit incompetence has led to a decline in its polling numbers, and it seems to have decided to reverse this through the politics of polarization. And so the loyalist people of Northern Ireland have ultimately been ill-served by both treacherous so-called “allies” in the U.K. government and their own inept leaders.

What can be done? The door appears closed on reversing Brexit or resurrecting Ms. May’s compromise. But we cannot accept what the DUP and the loyalist rioters appear to want – the removal of the border from the Irish Sea to the land of Ireland – as this would simply lead to nationalist rioters replacing loyalist ones in the streets.

Unionist politicians can start by dialling down their rhetoric. They should tell their followers that Northern Ireland will remain a part of the U.K. until, under the terms of the Good Friday Agreement, a majority of its voters (and a concurrent majority in the Irish Republic) decide otherwise – a reality unchanged by Brexit.

Unionists also need to know that some of the current difficulties – delays in the movement of goods from Britain to Northern Ireland, and stores in Britain refusing to send goods to Northern Ireland because of the new paperwork – are most likely transitional problems. These should be eased in time and probably quite soon.

It should also be remembered that Northern Ireland’s politicians can opt out of the current border arrangements within four years if a majority of its Assembly decides that the region is not well-served by them. They will then have two years to negotiate new arrangements.

And, finally, the people of Northern Ireland should reflect on the remarkable economic potential of the current arrangements. Their region is now the only place on earth that is part of both the EU and U.K. markets. Surely, this is an advantage that international companies will want to take advantage of when deciding where to locate – if only the rioting would stop. 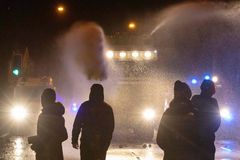 Northern Ireland gripped by some of its worst violence in years as tensions rise over Brexit, policing
April 8, 2021 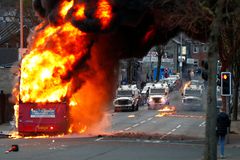