Mayo Moran is the provost and vice–chancellor, Trinity College in the University of Toronto

A French government report recently did something remarkable: it recommended a process to permanently return African cultural heritage acquired through “theft, looting, despoilment, trickery, and forced consent.” On the same day the Macron Report was released, the President announced the return of 26 important cultural objects back to Benin.

The reverberations began immediately. The King of Belgium had planned to visit the reopening of the Africa Museum after an ambitious renovation designed to tackle the legacy of Belgian colonialism. But most of its 120,000 objects were taken from the Congo during the colonial era and there are renewed demands to return them. The King canceled his planned visit amid the controversy. Other museums in Europe watch and struggle to contain their alarm.

Restitution – the demand to give back what was wrongfully taken – is an old legal idea that is enjoying a dramatic new life, as seen in movies such as Black Panther, Woman in Gold and The Monuments Men. Unlike a ‘finders keepers’ approach, it asks that holders show that they acquired property fairly – which usually includes consent – or be prepared to give it back.

European museums know they will have great difficulty showing fair acquisition. Few even try to make that argument. Some instead argue that the objects won’t be cared for. Others openly worry that taking restitution seriously would empty Europe’s best museums. And still others have challenged the very idea that restitution applies, boldly asserting that war looting was legal at the time, even if it was immoral.

Perhaps this is unsurprising. Until recently the Holocaust–era and Nazi looted art have dominated the field, leaving the vast European colonial issues well below the radar. But the Macron Report has changed that, forcing museums to confront restitution head on. In the task that lies ahead, Canada’s experience, including the work of our Truth and Reconciliation Commission, might hold some lessons for Europe.

One result of our colonial legacy is that Indigenous peoples in Canada have had long experience with the loss of human remains and sacred cultural property. They have also been at the forefront of bringing their ancestors, and now their sacred objects home.

The Cranmer Potlatch is a case in point. It was held on BC’s Village Island in 1921, during the time when the Indian Act banned potlatches. Federal officials swooped in and made arrests. But they also offered a possible reprieve: agree not to hold potlatches and hand over headdresses, masks, and other ceremonial items. Although many were jailed nonetheless, 750 objects ended up in museums – the National Museum in Ottawa, the Royal Ontario Museum and the Museum of the American Indian in New York.

The precious objects may have disappeared, but the memory did not. With the end of the potlatch ban in 1951, efforts to bring them back began. In 1979, the objects finally began to come home. Eventually most of the objects were returned. Cultural centres were built in Cape Mudge and Alert Bay to house the items, the first such custom built institutions in Canada. The return did more than rectify an injustice; it also inspired renewed pride and interest in ceremonies.

Museums are at the centre of the issues around restitution and repatriation. That is why Canada’s Truth and Reconciliation Commission called upon museums to collaborate with Indigenous peoples on these issues. The Canadian Museums Association now has a working group that brings together national museums and Indigenous cultural institutions.

Museums themselves are also increasingly engaged. The CEO of the Royal Museum of BC says that museums have a moral obligation to support Indigenous repatriation, including financially. That museum supports a ‘Repatriation Grant’ and now has two Indigenous repatriation specialists. Federally, Bill C–391, which has just passed second reading, proposes a national strategy for the repatriation of cultural property. The sponsor, Bill Casey noted that restitution used to be a “no–no” in the museum world, but the conversation is changing.

For Europe, that change is much more dramatic. But Canada’s experience shows that once return is framed as a matter of justice, as Indigenous peoples did here long ago, its logic proves difficult to resist. In the mid–1970s, the Haida convinced the Royal Museum of BC to return some totem poles that had been cut down and taken away decades before.

The poles now sit in the Haida Gwaii Museum, which opened in Skidegate in 1976. An important part of a larger cultural revitalization, it is also internationally recognized and is one of only 12 “A” museums in BC.

We have been at this for a long time, observed members of the Haida Repatriation Committee at another ceremony in 2017, and are “good at showing the world how to make things right”. Maybe Europe should listen. 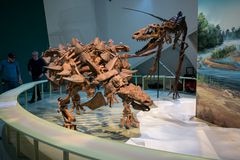