The best word to describe the Republican reaction to Joe Biden’s choice of Kamala Harris as his running mate is “confused.”

Was she, as Donald Trump tweeted, the standard-bearer of the “Radical Left,” a hard-line ideological warrior? Was she, as a Trump campaign ad charged, a “phony,” a political opportunist untethered to any solid convictions? Or was she, as a Trump spokeswoman intimated, a harsh, law-and-order conservative, who as a former prosecutor “fought to keep inmates locked up in overcrowded prisons”?

How to reconcile these conflicting impressions? As with any attempt to place someone on the ideological spectrum, it depends what benchmark you are using. Before you can say whether she is left, centre-left or what have you, you have to ask: Compared to what? It’s fair to say she is to the left of Mr. Biden – on health care, for example, where as a candidate for the nomination she supported a version of what is known in the United States as “Medicare-for-all.”

But to be to the left of Mr. Biden, or even of most senators, does not put her all that far to the left – of Democratic voters, certainly, or even of voters generally, amid the social and economic wreckage of the Trump presidency. Ms. Harris’s presidential campaign foundered, it is true – unable to stake out ground between the Democratic left, represented by Bernie Sanders and Elizabeth Warren, and the centrist candidacies of Amy Klobuchar and Pete Buttigieg.

But she may just have caught the mood of the country, or at least of the voters the Democrats need to reach: anxious for change, but as anxious about what change might bring. It is not uncommon, in such moments, for voters to prefer the candidate or party with one foot on the brakes, seemingly pulled by change rather than leading it. The 77-year-old Mr. Biden, nobody’s idea of a radical, had been recalibrating the broad message of his campaign even before this, from “transitional” to “transformational.”

Ms. Harris adds further nuance and depth to this position, reassuring the base (if not the hard left, which views her with unaltered suspicion) without frightening the middle. It says a lot about where American politics has landed that a Black, liberal woman would be viewed as the “safe” choice. But it also says a lot about Ms. Harris personally.

Most voters, it is worth reminding ourselves, are not particularly interested in or even informed about a candidate’s ideology. The moderatism they are looking for is less to do with particular policies than temperament and tone. Republicans can try all they like to seize on this or that Senate vote as evidence that Ms. Harris is “outside the mainstream,” but I doubt it will wash, set against the reassuring level-headedness of her persona.

Indeed, for all the trailblazing attributes of her candidacy – the first Black woman ever on any national ticket, as earlier she was only the second Black female senator ever and the first Black female attorney-general of California – what was most striking about the unveiling was the sense of … normality.

Ms. Harris is an extraordinarily talented, impressively assured candidate – calm yet expressive, dignified yet warm – possessed of a rare mix of experience and promise. Most VP picks fall into one category or the other: either grizzled old hacks like Dick Cheney or Lloyd Bentsen, or frighteningly unqualified newcomers like Dan Quayle or Sarah Palin. Or else they are forgettable plodders, like whoever it was that ran with Hillary Clinton. No one is likely to forget Ms. Harris’s candidacy.

Yet for all her star power, she seems recognizably human – neither the overly programmed career pol nor the flinty, look-at-me “maverick” but someone who talks like other people do, feels what other people feel. Watching her speak, you could almost believe that she was speaking off the cuff, even when you know it is from a prepared text.

Above all, you can imagine her as president, surely the first prerequisite of any candidate for vice-president – but especially given Mr. Biden’s advanced age. People are making much too big a deal out of Mr. Biden’s willingness to forgive Ms. Harris’s attacks on him during the primaries – as if, after 50-plus years in politics, he were still crying into his pillow about the mean things a rival candidate said about him on the campaign trail. But it does say something about him that he is willing to risk being overshadowed by his running mate. Mr. Biden could have “ticked all the boxes” with a much lower-wattage pick. A Black American might have been expected to increase Black turnout in battleground states such as North Carolina and Georgia; a woman would be calculated to lock in the Democrats’ advantage among female voters.

But in Ms. Harris, Mr. Biden has chosen a running mate who not only ran against him, but whom many voters would prefer at the top of the ticket. But wait: Is that all that extraordinary? Or have we just been conditioned by four years of Mr. Trump to expect that a candidate would be too insecure to tolerate anyone else sharing the spotlight, too vain to surround himself with any but placeholders and sycophants?

This is the central challenge of Mr. Biden’s campaign: not only to offer the prospect of a return to normality after the Trump aberration, but to remind Americans what normality looks like – to raise expectations that Mr. Trump had successfully battered to the ground. As unprecedented as his choice of Ms. Harris may be, what is most appealing about it is how unextraordinary it seems. 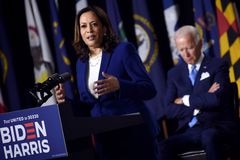 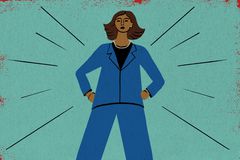 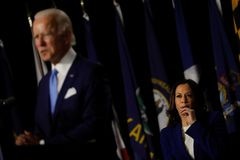