Moira Dann is a writer and former Globe and Mail editor now living in Victoria. She is currently writing a correspondence-based biography of George Brown and his family.

On this weekend 155 years ago (it wasn’t yet called Thanksgiving; the second Monday in October was so designated only in 1957), the men we call the Fathers of Confederation were in Quebec City, crafting resolutions to make manifest the nation (Canada) they had agreed to create the previous month at a conference in Charlottetown.

Most delegates had travelled stag to Charlottetown but most arrived in Quebec with their wives and daughters (I consider them to be the Mothers of Confederation).

While the men struggled to hammer out the 72 resolutions that still form the basis of Canada’s Constitution, the ladies participated in what amounted to a conference spouse’s program, circa 1864.

One young woman, Mercy Anne Coles, daughter of then-PEI opposition leader George Coles, kept a diary that she called Reminiscences of Canada in 1864. She travelled with her parents to Quebec City and beyond, hoping to meet a prospective husband.

As described by Father of Confederation George Brown in a letter, she was “well-educated, well-informed, and sharp as needles.”

Similar to the way a turn on a kaleidoscope can reveal a vastly different picture, it’s revelatory to consider alternate experiences of momentous historical events beyond those officially recorded or written about in newspapers of the day. This is what makes Ms. Coles’s journal so intriguing, as she tells us about what happened beyond the conference room when she writes about the food, the dress, the weather and the vagaries of travel in the mid-1800s.

“How can I describe my first impression of Quebec,” she wrote on Oct. 8, 1864. “It was pouring rain when we landed, we were shut up in a little cab. … I was in dread the whole time the horse would fall down however he brought us here all right; it is a very nice hotel and every comfort one would wish for.”

Later, Ms. Coles noted who she met in the hotel after getting changed: “When I came down, I found Mr. [George] Brown in the drawing room. Mr. [Hewitt, soon to be John A. Macdonald’s brother-in-law] Bernard had been in a few minutes before; in a minute Mr. [George-Étienne] Cartier, John A. Macdonald and [Thomas D’Arcy] McGee arrived.”

As Father of Confederation Edward Whelan wrote in his Charlottetown newspaper, The Examiner, politicians of all stripes in Quebec sought to charm the distaff influencers, getting close by asking for a dance.

“They are cunning fellows,” Mr. Whelan wrote, “and there is no doubt that it is all done for a political purpose; they know if they can dance themselves into the affections of the wives and daughters of the country, the men will certainly become an easy conquest.”

Ms. Coles wrote of the next big event where these “cunning fellows” had a chance to “dance themselves” into the hearts and minds of wives, daughters and sisters: “We all went to the Drawing Room last night, quite a crowd when we all got together, all the ladies looked very well and were quite a credit to the lower provinces. … There were about 800 people presented and I was very tired before it was all over. Mr. [Samuel Leonard] Tilley took charge of me and walked about with me the whole evening. When we came home Ma and I went immediately to bed, we were so tired.”

Another female observer was Frances Elizabeth Owen (Feo) Monck, the Governor-General’s sister-in-law. Her more acerbic judgment of the Drawing Room was that it “was not near so funny as the last one, the dresses were much improved, some wore feathers.” At another event, she wrote of dancing with Nova Scotia premier Charles Tupper, "who trembled with nervousness as I whirled him through the Lancers.”

Mr. Brown was clear in recognizing what a political asset his wife would have been had she been there: “We have a whole bevy of ladies accompanying the Maritime Delegates. … Some of them are very nice people & I am sorry you are not here to entertain them when they reach Toronto. Mrs. Archibald [wife of Nova Scotia delegate Adams George Archibald] is a very nice person & so is her husband. If the Confederation goes on, he will be a political ally of ours in Nova Scotia & so will Mr. [Tilley] in New Brunswick. It would have been very pleasant had you been here to greet them as our guests in Toronto.”

It’s clear many of the Quebec Conference delegates worked their charm to influence the wives and daughters and sisters of their colleagues, who had a corseted kind of influence on their fathers and husbands and brothers. But it would be 54 years before women (with egregious exceptions, such as Inuit and Indigenous women who had to wait until mid-20th century) were able to vote federally.

It would be 57 years before political influence transformed into political power in 1921, when Agnes Macphail became the first woman elected to the House of Commons.

And on Oct. 18, it will be 90 years since the Persons Case constitutionally established the right of women to serve in Canada’s Senate.

It all seems so long ago, but it’s not. I often think how different the creation of Confederation would have been if women had been able to go beyond the power to influence and been able vote in 1864.

We all, men and women both, have the power to go beyond influence to determine the election outcome with our vote.

Voting is the single biggest demand the democracy we’re lucky enough to live in makes of us.

It’s a citizen privilege many have died for, and all any citizen has to do is show up with the appropriate identification.

Get ready for Thanksgiving with our guide to food, wine and giving thanks
October 11, 2019 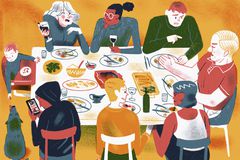