Bessma Momani is a professor at the University of Waterloo and the Balsillie School of International Affairs. She is also a senior fellow at the Centre for International Governance Innovation and the Stimson Center in Washington, DC.

After nearly two weeks of unending attention on the disappearance and now confirmed death of Saudi journalist Jamal Khashoggi, the powers have finally agreed upon a narrative that can satisfy all interested parties’ state interests. Make no mistake, the now-agreed-upon story of Mr. Khashoggi’s death was a negotiated one between Saudi Arabia, the United States and Turkey. All three countries have little interest in dragging on an investigation and, more importantly, have the death of a journalist divert attention away from the common interest they have in doing business with one another.

The Turks have clearly known from the very start of Mr. Khashoggi’s announced disappearance that foul play had occurred at the Istanbul consulate of Saudi Arabia. The highly regulated and state-censored Turkish media continued to release bits of information, often leaked to state press agencies, on what happened to Mr. Khashoggi inside the consulate.

The Turks knew the Washington Post journalist died inside the consulate, but continued to try to give Saudi Arabia an opportunity to own up to this or, better yet, find a scenario that could remove the spotlight away from the highest echelon of Saudi decision-making, in particular away from the brash Crown Prince Mohammed bin Salman. While the Turks have not had a smooth relationship with Saudi Arabia in recent years, Turkish President Recep Tayyip Erdogan is facing an economic crisis at home and Saudi foreign investment in Turkey and Turkish firm investment in Saudi Arabia are lucrative contracts that could not be jeopardized.

Similarly, U.S. President Donald Trump was in an uncomfortable position of having to reckon with growing political and media heat about getting to the bottom of Mr. Khashoggi’s death. A bipartisan letter of support in favour of applying the Magnitsky Act against the Saudi authorities in retaliation for Mr. Khashoggi’s death, and the relentless questioning about what Mr. Trump was going to do to pursue the case, were unnecessary diversions. (He would prefer to be focusing on the positive economic news before the coming midterm elections.)

Not to mention Mr. Trump’s first international trip to Saudi Arabia showcased his brand of a pragmatic foreign policy approach that focused on business and job opportunities for Americans. He came home to announce that nearly $110-billion in arms deals were inked on his trip to Riyadh. Of course, the actual number of new agreements has been shown to be much lower, but Mr. Trump took great pride in being able to say his masterful deal making delivered deals and jobs. Economic sanctions on Saudi individuals in retaliation for Mr. Khashoggi’s death became an issue that continued to gain steam with every passing day and was not in Mr. Trump’s interest.

Global investors and business personalities are slowly dropping out of Saudi’s Davos in the Desert finance meeting, potentially costing Saudis lucrative contracts. Feeling the heat, Saudi Arabia in recent days had let it be known that it would consider economic retaliation for those who dared to try to inflict economic pain on the kingdom.

A Saudi government insider opined in a widely cited Saudi article that his country could disturb oil prices by squeezing supplies, rattling the oil markets at a time when Iran is due to go offline from U.S. sanctions in early November. The not-so subtle article suggested that prices could climb as high as US$150 a barrel. Mr. Trump had already called out the Organization of Petroleum Exporting Countries and the Saudis at least four times on Twitter for letting oil prices get too high at around US$80 a barrel. Prices at the pump are an important issue to Mr. Trump’s base of support – and hence to Mr. Trump, too.

The Turks, the Americans and the Saudis themselves all needed a way out of this impasse. With too much to lose, the truth behind who ordered the death of Mr. Khashoggi will be sacrificed. For weeks now, all eyes have been on Prince Mohammed as the brash de facto leader who has a keen habit of wanting to silence his critics, regardless of how mild they may be. The negotiated story will pin Mr. Khashoggi’s death on a rogue squad that is far removed from the centre of power in Riyadh. Yet, those following the killers’ connections to the Crown Prince will have a hard time swallowing this story.

All three state parties win as they hope the news cycle will move on, but no justice will be served for the man who chose to speak truth to power. 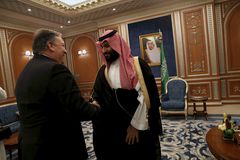