Bernie Farber and David Fisman
Contributed to The Globe and Mail
Published May 14, 2021 Updated May 14, 2021
Comments
Text Size
Please log in to listen to this story. Also available in French and Mandarin. Log In Create Free Account

Bernie Farber is the chair of the Canadian Anti-Hate Network. David Fisman is a professor of epidemiology at the Dalla Lana School of Public Health at the University of Toronto.

The pandemic has been a major source of disruption in the lives of Canadians for more than a year, leaving many of us frightened. For some people, that fear means opportunity.

In 2008, epidemiologists developed models of the “coupled” dynamics of epidemics and the fear generated by them, showing that behavioural changes engendered by fear can spread as a parallel epidemic, making the infectious disease worse. When two such epidemics interact, the process is referred to as a “syndemic.”

According to a recent report in The New York Times, many experts now believe the United States may never reach herd immunity. This is largely due to hesitancy around safe and effective vaccines, which is being driven in part by anti-science and pro-conspiracy beliefs. These movements have only sown confusion as people navigate the informational minefield that is a public-health crisis, and they threaten to keep us all in pandemic limbo for the foreseeable future.

Indeed, since the beginning of the global outbreak, conspiratorial anti-establishment movements have only gained momentum, finding common cause in opposing mask mandates and lockdown measures and sucking up oxygen by undermining valid criticisms of government health orders. Rallies and protests have been organized almost every weekend across the country, and those who have found fame in the process bill themselves as defenders of our freedoms. They march with a list of grievances and conspiracy theories, but all believe they are standing up against their misguided idea of tyranny.

Outdoor rallies may not in and of themselves confer much risk on attendees; COVID-19 is some twentyfold less infectious outdoors than indoors as a result of dominant aerosol transmission. However, these gatherings undermine confidence in public-health guidance and promote messaging that is likely to further damage communities already hard-hit by this pandemic.

Ekos Research has found that 8 per cent to 20 per cent of Canadians have views that could be characterized as being distorted via disinformation, with men, minorities and lower-income individuals more likely to be disinformed. We know that minority and lower-income communities in Canada have already been the hardest-hit by COVID-19, and now we’ve seen the promotion of disinformation deepening the problem. Vaccine hesitancy also tracks closely with being disinformed; the promotion of disinformation will continue to injure communities even if it becomes possible to move beyond the pandemic via vaccination.

The principal actors of the anti-lockdown movement have either been or rubbed elbows with some significant haters on the scene. Vancouver neo-Nazi Brian Ruhe, who at one point organized a mock book burning, was involved in its earliest iteration. Quebec’s far-right conspiracy streamer Alexis Cossette-Trudel, a big name among France’s QAnon following, is an important mouthpiece of the francophone anti-lockdown movement. Neo-Nazi Paul Fromm is a fixture at rallies in both Ontario and in Kelowna, B.C. Antimask activist Chris Saccoccia’s social-media feeds feature Holocaust denial and racist posts.

Perhaps one of Canada’s most persistent agitators is Kevin Johnston, who made national headlines in 2017 when he was charged with the willful promotion of hatred against Muslims. In 2019, he lost a $2.5-million judgment for his role in racially motivated defamation against Toronto philanthropist Mohamad Fakih in which he repeatedly accused him of being a terrorist; the judge called his comments about Mr. Fakih “hate speech at its worst.” Now, Mr. Johnston is running for mayor of Calgary and has shifted gears by portraying himself as an anti-lockdown and antimask influencer.

The fact that an anti-public health agenda aimed at undermining the Canadian economy and the health and well-being of Canadians has been taken up by a rogues’ gallery with a long track record in disinformation and promotion of hatred should give us all pause. And with our country now approaching 25,000 dead due to COVID-19, Canadians should ask themselves whether the promotion of disinformation – and the undermining of the tools and measures that will permit a return to normalcy – has crossed the line from mere grotesque opportunism to active, malicious harm. 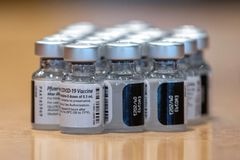 Thousands march in Montreal to protest public health measures
May 3, 2021 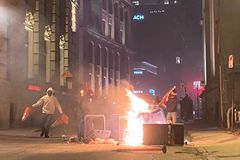