The Oscars provided a liberating moment for anyone who grew up squirming in discomfort when a commercial for menstrual products, which usually featured an alarmingly happy woman dancing in a white dress, came on TV. In those bad old days it was not uncommon to trade in euphemisms like “Aunt Flo is coming to town,” or for advertisers to perpetuate the myth that women shed a pretty blue liquid every month.

Then, wonderfully, a taboo was broken when 25-year-old Iranian-American filmmaker Rayka Zehtabchi came to the stage on Sunday night to accept the best documentary short award for the film Period. End of Sentence. “I’m not crying because I’m on my period or anything,” Ms. Zehtabchi said. “I can’t believe a film about menstruation just won an Oscar!”

And not just a film about menstruation: It’s also a film about the shame and secrecy that still shrouds a basic biological function shared by half the world’s population. It takes place in a small village in India, where women are using a simple machine to manufacture and sell pads (up to a third of girls in the developing world miss school because they can’t afford sanitary products, or don’t have access to toilets when they’re on their periods.)

The documentary, now available on Netflix, is a product of The Pad Project. The project is the initiative of a group of high-school students in Los Angeles and their teacher, Melissa Berton, who had heard about the problems of menstruating girls in distant parts of the world, and wanted to raise funds and awareness. Ms. Berton provided one of the Oscars’ highlights when she said, ‘’a period should end a sentence, not a girl's education."

I was thrilled that this period-power was embraced in the very heart of Hollywood, not normally a place where menstruation is considered an audience magnet to rival the new Avengers movie.

Jana Girdauskas was also thrilled when she saw the filmmakers accept their award, but she also felt a moment of disconnect. Ms. Girdauskas is the founder of The Period Purse, a non-profit that distributes pads, tampons and other hygiene products to marginalized and homeless women around Ontario, and she wanted Canadian Oscar viewers to know that menstrual inequality isn’t just something that happens in developing countries.

‘’I was super excited to see that moment,” Ms. Girdauskas said in an interview. “I thought, millions of people just heard ‘period’ and menstruation’ on TV.” But what people might not realize, she says, is that “period poverty happens in Canada. It happens in Toronto.”

Consider that a woman can spend anywhere between $10 and $40 a month for pads and tampons (reusable menstrual cups are cheaper over the long run, but may be impractical for homeless women.) Multiply that by the 40 or so years a woman will likely have her period, and the cost becomes unsupportable for women on limited incomes. The problem is worse for Indigenous girls and women living in communities where a box of tampons can cost upward of $40.

Ms. Girdauskas says that women and trans men are often reduced to jerry-rigging protection for themselves, using old newspapers or socks, or wads of toilet paper. It’s dehumanizing, and the Period Purse has joined with Toronto Councillor Kristyn Wong-Tam to ask for an increase to Toronto shelter funding that will mean women have access to the supplies they need (at the moment, Ms. Girdauskas says, most shelters simply can’t afford menstrual products, or might have to severely ration how many they give out.)

It’s not just women living on the street who are affected. Girls whose families have limited incomes may miss school when they’re menstruating because, as Ms. Girdauskas says, “the parents say, ‘I can’t spend that $15 this month. I’d rather get a meal on the table.' ”

And this brings us to the other hopeful development in menstrual liberation, which is the movement for free sanitary products in schools. Fuelled largely by girls in high schools, the movement is gaining momentum across North America. The school board in New Westminster, B.C., has just announced its plans for free pads and tampons in all its schools, which simply makes sense. Male and female students aren’t charged to use toilet paper or water when they use the bathroom – why should girls be unjustly financially penalized for a function of their biology?

The fact that women and girls are denied access to menstrual products “is nothing short of a human rights violation,” Amanda Laird writes in her new book Heavy Flow: Breaking the Curse of Menstruation. There is nothing inevitable about this, Ms. Laird writes. Rather, it’s a part of the age-old stigma and shame that surrounds women’s bodies: “Despite all our advances as a species, menstruation is something that remains a relative mystery for many humans. We can put a man on the moon, yet almost half the world’s population is suffering on a monthly basis, often in silence, because of a perfectly natural bodily function.”

It is possible that the secrecy and weirdness are slowly lifting. I’d like to think that men and boys are learning more about the biology of the women in their lives. I sincerely hope that whoever has the TV remote no longer immediately clicks away when the lady in the white dress starts doing her menstrual happy dance.

This month, the world will welcome a period emoji. Granted, the emoji shows a drop of blood rather than the bloody underpants that menstrual activists were hoping for, but hey, it’s a start. With one click, women will be able to convey the complexity of what they’re feeling at that moment, which otherwise might require a pill emoji plus a bag of chips plus a hot water bottle.

The harder fight is the one that calls for us to put up actual money and resources, to support women who might have neither money nor resources. Make the pads free, and you liberate the people using them.

Opinion
Toronto is building a Sidewalk, and no one knows where it goes Subscriber content 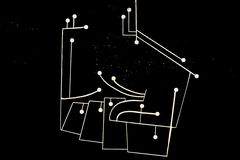 Opinion
What happened to our ‘feminist’ Prime Minister? Subscriber content