Sarah Kendzior is the co-host of the podcast Gaslit Nation and the author of coming book Hiding in Plain Sight.

“Life is what you do while you’re waiting to die,” Donald Trump, then a real estate tycoon bound for bankruptcy, told Playboy magazine in 1990. “You know, it is all a rather sad situation.”

“Life?” the interviewer asked. “Or death?”

For his entire life, Mr. Trump has been a self-described fatalist. He has called himself a fatalist in interviews spanning nearly 30 years. This admission is a rare expression of consistent honesty for a man infamous for lying about everything – his fortune, his criminal ties, objective reality. It’s the outlook he hints at when he does things such as retweeting a meme of himself fiddling like Nero, while the novel coronavirus spreads across the United States.

Nothing seems to matter to Mr. Trump – not only in the sense that the things that matter to other people, like love and loss, do not matter to him. Nothingness itself matters: Destruction and annihilation are what he craves. “When bad times come, then I’ll get whatever I want,” he told Barbara Walters in an 1980s interview. His initial reaction to 9/11 was that the collapse of the World Trade Center made his own buildings look taller. His initial reaction to the 2008 economic collapse was joy at his potential to profit. Everything to Mr. Trump is transactional, and you – all of you – are the transaction.

In February, 2014, when asked about the direction of the United States, Mr. Trump rooted for its demise:

“You know what solves it?” Mr. Trump told Fox News. “When the economy crashes, when the country goes to total hell and everything is a disaster. Then you’ll have a [laughs], you know, you’ll have riots to go back to where we used to be when we were great.”

Everything Mr. Trump has done since taking office has served to fulfill this goal, from appointing Steve Bannon, who also called for the collapse of the government, as an adviser; to gutting departments that protect national security and public health; to his disdain for slain soldiers and their widows; to his horrific handling of natural disasters such as Hurricane Maria.

For months, Mr. Trump has done little to stop the coronavirus from spreading throughout the U.S., creating a death toll that grows rapidly every day. As citizens self-isolate, he refuses to supply federal funds to states for the much-needed medical equipment, such as masks or ventilators. When a reporter offered him the chance to ease the fears of Americans, Mr. Trump instead lashed out at the reporter for even asking. Pundits have expressed confusion about why he will not invoke the Defense Protection Act, but they should have expected it.

This is who Mr. Trump is, who he always was. In a time when everything is changing, you can rely on Mr. Trump’s apathy to suffering.

What makes Mr. Trump particularly dangerous is that he is not acting alone. He is backed by the Republican Party, which translates his natural apathy to suffering into malicious policies. Mr. Trump is surrounded by brutal plutocrats such as Steve Mnuchin and Wilbur Ross, who, like Mr. Trump, are protégés of the infamous corporate raider and former White House adviser Carl Icahn, who set the standard of destroying companies for profit.

Mr. Trump is also flanked by a number of religious extremists, such as William Barr, Mike Pompeo and Mike Pence, who use biblical imagery to cloak their brutal goals. The overall effect is a group that will sacrifice human lives to lift the stock market. Republican Lieutenant Governor Dan Patrick of Texas stated that grandparents should die for the U.S. economy. In that mentality, the U.S. exists to be raided and razed, its citizens disposable and inconvenient.

Mr. Trump, a notorious germophobe with a lifelong fear of hand-shaking, is remarkably sanguine about the coronavirus, given that he is in the demographic more likely to die if infected. He is sanguine in the way he was about being impeached, or about being labeled Individual One in a federal indictment.

Maybe it is because the world finally exists as it has in his fantasies: Everything is collapsing, yet he remains untouchable. No GOP member has denounced Mr. Trump, just as they refused to impeach him; because Mr. Trump is still in office, public officials are struggling to contain the virus.

Mr. Trump is untouchable in a world where human touch literally kills. If the U.S. is to survive the pandemic, we need more than medical intervention. We need to get rid of the host. 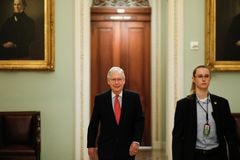 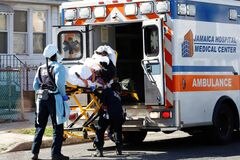