The House of Commons erupting into chaos over a pipeline intended to connect Alberta oil to a greater market. Talk of the government subsidizing resource infrastructure. Conservatives throwing barbs over Liberal arrogance. All this should sound familiar to anyone paying even cursory attention to Canadian politics right now, but the pipeline in this scenario isn’t Kinder Morgan’s. It’s TransCanada’s. And this isn’t 2018. It’s 1956.

Kinder Morgan’s Trans Mountain expansion project is not the first pipeline to divide Canada’s major parties and split its electorate. From May 8 to June 7, 1956, a pipeline ripped Canadian politics apart. Debate over the construction of the TransCanada pipeline resulted in what historian William Kilbourn called “the stormiest episode in Canadian parliamentary history.” The House of Commons devolved into bitterness and viciousness, with the debate hitting such a feverish pitch that it supposedly caused the fatal heart attack of one MP. Some political careers were launched, others were destroyed.

At its heart, the 1956 pipeline debate was a microcosm of the greater economic question that had split Canada since Confederation: nationalism or continentalism? The point of division over TransCanada was not whether the pipeline should be built – the expansion of natural-resource infrastructure was considered an unambiguous good – but whether it should be owned by an American company. The U.S.-owned TransCanada Pipeline Ltd. had apprehensions about building a pipeline across the Canadian Shield, so the Liberal government of Louis St. Laurent, driven largely by “Minister of Everything” C.D. Howe, offered to subsidize its construction. Mr. Howe presented a plan to the House of Commons to lend TransCanada $80-million. Describing the pipeline as a “great national project,” Mr. Howe insisted that lending money to the U.S. firm was the only way to get construction under way that year.

The pushback was immediate. The moment Mr. Howe finished his introductory speech on May 8, then-Progressive Conservative leader George Drew asked him why a Canadian pipeline for Canadian oil could not be controlled by a Canadian corporation. Mr. Howe had previously claimed that U.S. investment was necessary because Canadian companies could not bankroll the project, but now, the Liberals were insisting that only federal spending could ensure the pipeline’s construction. Mr. Drew wanted to know: Why should Canadian taxpayers be propping up an American company?

Other prominent Progressive Conservatives took the issue a step further: Why should an American company be controlling Canadian resources? John Diefenbaker, at that point the PC foreign-affairs critic and always a fierce nationalist, led the opposition tirade against Liberal continentalism. Mr. Diefenbaker at one point demanded to know why Mr. Howe intended to “turn over monopoly control of one of Canada’s great and exhaustible resources” to American owners. Making matters worse for the government was the fact that Mr. Howe was born and raised in Massachusetts, adding the subtext that the Liberals were more pro-U.S. than pro-Canada.

Citing a report that suggested the pipeline was not “in the best interests of Canada” because it would be “controlled by United States financial interests,” Mr. Diefenbaker attacked Mr. Howe again: “When you are asking us as to what is in the best interests of Canada, don’t you believe that a Canadian could possibly give you as good advice as those from the Tennessee corporation in the United States?” If a pipeline is going to connect Alberta gas to Toronto and Montreal, Mr. Diefenbaker posited, shouldn’t it be owned by Canadian investors?

Canada’s economic sovereignty was at stake. U.S. investors had been dominating Canada’s economy for decades, and the Liberals, through the TransCanada loan, were handing Canadian resource wealth to an American corporation. It wasn’t just about the pipeline; rather, it was an existential question about the composition of the Canadian economy. Shouldn’t Canada’s resources be owned by Canadians?

On this question, the parties followed their traditional alignments. The Tories, and Mr. Diefenbaker especially, took the old-school nationalist line they’d held since Confederation. Since John A. MacDonald’s protectionist National Policy, through debates over free trade in the 1896 and 1911 federal elections, they’d been the party of economic nationalism and reflexive anti-Americanism. Mr. Diefenbaker’s tirades against the Liberals for betraying Canada’s economic sovereignty to U.S. investors were part of a greater conservative tradition of apprehension toward American finance. As he put it a year later, as prime minister: Could Canada have a “meaningful independent existence” if its economy was dominated by American investors and corporations?

The CCF also followed its traditional position, as leader M.J. Coldwell argued that, if Canadian money was going to TransCanada, it should be to nationalize the pipeline.

By offering the loan to TransCanada and taking the pro-U.S. position, the Liberals were keeping true to the continentalism they had propounded as far back as the 1890s. Under Mackenzie King, they had accelerated U.S.-Canada economic integration during wartime, and Mr. St. Laurent and Mr. Howe were continuing this pro-U.S. investment tradition.

The parallels between 1956 and 2018 are significant – the three main parties are still there (the CCF became the NDP and the PCs became the Conservatives, of course) and all at each other’s throats.

The contrasts between the 1956 debate and the current political battle over the Trans Mountain expansion, however, are striking. The parties may be the same, but their positions are jarringly different than they were little more than 60 years ago. The CCF wanted to do then what the Liberals want to do today – buy the pipeline. Now the NDP, after some soul-searching, is opposed to the pipeline’s existence altogether. The Liberals of 1956 wanted TransCanada built, just as they want Trans Mountain built now, but they’ve decided that the way to make that happen is to buy the pipeline outright rather than just bankroll it. The PCs of 1956 were angry that the Liberals were doing too much to encourage U.S. investment; now they’re angry that the Liberals aren’t doing enough.

Here in 2018, no one seems to care that much that Kinder Morgan is an American company. The 1956 pipeline debate was about whether the Canadian economy should be dependent on U.S. investment; in 2018, we take for granted that it is. For most of Canadian history, economic sovereignty vis-à-vis the United States was a central political issue. Thirty years after the negotiation of the Canada-U.S. Free Trade Agreement, however, continentalism is accepted as normal. Watching the three parties unite behind Prime Minister Justin Trudeau as he fights to preserve the integrated North American market stands in stark contrast with intense debates such as that of 1956, in which economic interdependence was viewed as a probable precursor to the complete loss of Canadian independence. Pipelines were a hot-button issue because U.S. investment was considered pernicious. Now all three parties actively fight to safeguard it. Oil infrastructure may now be controversial, but U.S. investment is not.

Comparing pipeline politics then and now shows how dramatic this change in attitude really is. The realignment of the PCs from the party of economic nationalism to the party of continentalism represents one of the most drastic, least talked about changes in the history of Canadian politics. Brian Mulroney’s tenure at the helm of the PCs, in which he championed free trade before eventually negotiating NAFTA, permanently changed the face of the Canadian conservative movement. Mr. Diefenbaker’s PCs would’ve been horrified at the prospect of free trade. As Conservative Leader Andrew Scheer’s approach to Kinder Morgan makes clear, the party now aims to be as favourable to American investment as possible.

Most of the talk about Kinder Morgan has taken place in a historical vacuum, focusing entirely on contemporary issues, but historicizing it shows how dramatically Canadian political culture has changed over the past half-century. Although some of the same points are coming up again, the central issues at the heart of the two debates are completely dissimilar. Not once did Indigenous land title and sovereignty get mentioned as a potential reason to cancel TransCanada, and the only climate referred to in 1956’s parliamentary Hansard was investment climate. And, most notably, contemporary Canadians simply accept that our economy is dependent upon the United States and fight to keep it that way.

One important lesson to draw from the 1956 pipeline debate: Louis St. Laurent and C.D. Howe paid at the polls in 1957 for their approach to TransCanada. Mr. Trudeau would do well to proceed with caution.

Editor’s note: An earlier version of this article incorrectly said the pipeline carries Alberta oil. In fact, it is gas. This version has been corrected. 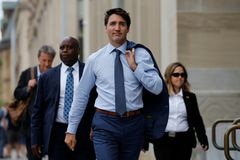 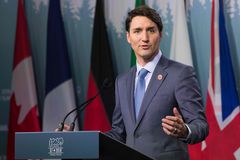 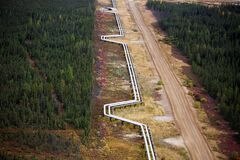