Juliet A. Williams is a professor of gender studies at the University of California, Los Angeles. She is the author of The Separation Solution?: Single-Sex Education and the New Politics of Gender Equality.

All-boys schools are touted as environments uniquely suited to developing the intellect and character of young men. But behind the rosy image of blazer-clad youngsters, strolling past ivy-covered buildings, lies a more complicated picture. This is a fact made clear by charges against six students at St. Michael’s College School in Toronto for alleged crimes including assault, gang sexual assault and assault with a weapon. These allegations raise important questions about the reality behind the reputation of all-boys schools.

To those steeped in the lore of elite all-male schools, the facts may be surprising. The truth is, the evidence just doesn’t back up the claim that single-sex education works. In 2014, researchers Erin Pahlke, Janet Shibley Hyde and Carlie M. Allison published a comprehensive meta-analysis of existing studies on single-sex instruction. Their exhaustive review found no significant differences in academic achievement between students in single-sex and co-educational schools.

Even if single-sex education doesn’t boost test scores, might it be beneficial for other reasons? Many believe single-sex schools are good for boys’ social development. Single-sex schools eliminate the distraction of girls and relieve boys of the pressure of posturing for their attention, the thinking goes. But the reality is that boys face plenty of distractions at school – whether or not girls are in the mix. For one thing, not all boys are sexually attracted to girls; some are attracted to their same-sex peers. Moreover, it is the crudest form of evolutionary reductionism to assume that alpha-male behaviour is purely a matter of attracting potential mates. Indeed, as masculinity-studies scholar Michael Kimmel observes, “patriarchy is not simply men’s power over women; it’s also some men’s power over other men.”

That’s a fact that St. Michael’s College School seems to have ignored, at tragic cost to vulnerable students. Sexual violence, after all, isn’t just about sex; it’s about power, too. For that reason, the possibility of sexual assault needs to be taken seriously in co-educational and single-sex schools alike. The problem of sexual violence can’t be solved by banning girls from school, any more than sexual violence is caused by the fact that girls are around.

If we truly want to create the best learning environments for our boys, we need to do a lot more than simply removing the so-called distraction of girls to do it. To really make a difference in boys’ lives, schools need to confront damaging ideals of masculinity head-on. In today’s world, that means taking a more aggressive stand against bro culture – with its presumption of sexual entitlement and glamorization of acts of sexual aggression. It requires recognizing that all-male spaces, including locker rooms, fraternity houses and, yes, even elite private schools – provide some of the safest havens out there for bros gone wild.

We must also confront the bro code of silence that provides shelter for alleged abusers under the guise of loyalty. It is telling that the allegations of misconduct at St. Michael’s College School this week aren’t limited to charges of sexual assault. School officials apparently didn’t immediately report all of the troubling incidents to the police.

In the #MeToo era, seeing victims and bystanders alike shatter the silence and call out complicity on social media is certainly heartening.

The allegations of sexual assault at St. Michael’s College School are a painful reminder that sexual violence can happen to anyone, anywhere. But they also shine a light on some of the distinctive hazards of all-male schools. 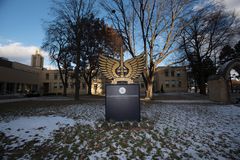 Opinion
St. Mike’s has a problematic culture – but there is a road to redemption
November 20, 2018