A couple weeks ago, a group marching under the banner of the Black and Indigenous Alliance Alberta organized a demonstration in Ponoka, Alta. But it didn’t go so well: People drove by and called the protesters names, accusing them of belonging to “antifa.” Some reportedly told them to go back to where they came from. And then, the group alleges that a truck intentionally swerved into them, striking a protester. He was taken to hospital with an injury to his eye and later released.

When they reported the alleged hit-and-run, an RCMP spokesperson said that police didn’t have the video footage needed to investigate.

A few days later, on Sept. 14, alliance members, including the man who was allegedly struck by the truck, held a news conference at the RCMP detachment to alert media to what happened. As they tried to begin, a small group of counterprotesters began shouting the alliance members down. One of the men brought a megaphone to drown out anything the group was saying to reporters. They also hurled vicious epithets at the alliance members who were there.

It was an ugly scene. But it got uglier.

Rachelle Elsiufi, a reporter with CityNews Edmonton, asked the head of the Ponoka detachment, Sergeant Chris Smiley, why nothing was done to deter those who arrived to disrupt the news conference. “Are you suggesting one side’s voice is more important than the others? Because it’s not,” he replied. “So we let everybody say what they need to say as peacefully as they can and that’s how this country works.” According to Ms. Elsiufi, two men “with connections to hate groups in Alberta” were standing beside her, and “celebrated” the officer’s response.

But as disconcerting as that moment was, things would get even worse.

The following weekend, the alliance decided to hold a demonstration in a park in Red Deer, Alta. Soon after they arrived to begin their rally, so did a convoy of trucks carrying a group of men that appeared to be looking for trouble. Again, many were identified by reporters as wearing the symbols of hate groups such as the Soldiers of Odin.

It didn’t take long for things to turn violent. The men walked up to the alliance demonstrators, many of whom were people of colour, and screamed into their faces, telling them to go home. Video from the scene shows a couple of clear assaults on alliance demonstrators, one of whom was punched in the face. Footage later shows three RCMP officers standing off to the side monitoring the situation.

Initially, the RCMP said there would be no investigation into what happened at the park. When video from the scene went viral on social media, the RCMP changed its tune, saying it would open a criminal investigation into two alleged assaults. The police defended their initial decision, saying the violence happened before their officers had arrived.

It sure looks like the RCMP has a problem here. The fact that people with racist ties can disrupt a peaceful news conference and be defended by police is outrageous. No one’s voice is more important than another’s? Are you kidding me? When one of those voices is that of a bigot and white supremacist, it is not as important as someone peacefully advocating against racism.

Alberta Justice Minister Kaycee Madu, who is Black, seemed genuinely upset by what happened in Red Deer. But I don’t think it’s enough to simply say it’s “unacceptable” and that it should never happen. He needs to have a conversation with senior officials in the RCMP about the type of people it has representing the force in the province and whether or not they are part of the problem here.

It shouldn’t take long for the RCMP to lay criminal charges in the Red Deer incident. The people responsible for the assaults are clearly visible in the footage. But beyond that, the RCMP has to do a far better job of ensuring the safety of people who are demonstrating for a cause that police know will upset some who will then come looking for trouble.

The idea of a convoy of trucks arriving and disgorging a group of angry white men with menace in their eyes brings back terrifying images of the American South in the 1950s.

I realize police have a difficult job. But trust in the RCMP is undermined when some among them exhibit behaviour that makes us question whose side they’re on.

Trudeau says he is disappointed in RCMP’s treatment of Sikh officers over mask issue
September 25, 2020 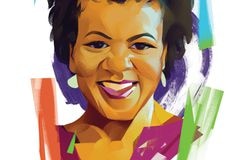