Joseph L. Clarke is an assistant professor of architectural history at the University of Toronto and author of a forthcoming book on the history of acoustics, Echo’s Chambers: Architecture and the Idea of Acoustic Space.

“We will rebuild it.”

Even before Monday’s fire at the Cathedral of Notre-Dame de Paris had been extinguished, French President Emmanuel Macron had already defiantly promised to lead a major reconstruction project. But what rebuilding means is a complicated technical, artistic and political question.

The wrenching viral footage of the Gothic church’s central spire collapsing in flames elicited an immediate and moving outpouring of support – both emotional and financial – from around the world. Already, more than $1-billion has been donated to help fund the project. When a catastrophe such as this befalls a beloved building, the first impulse of the public and politicians is often to recreate things exactly as they were. It’s worth remembering, though, that the iconic spire destroyed in Monday’s fire was not built in the Middle Ages. It was the work of architect Eugène Emmanuel Viollet-le-Duc, who led a restoration of the cathedral in the 19th century. Viollet based his spire on the original medieval one but made it more elaborate for visual effect.

Although his modifications scandalized some of his contemporaries, such changes are in no way foreign to Gothic architecture. Medieval cathedrals were often constructed and reconstructed over many generations, their architectural fabric changing bit by bit at the hands of builders with evolving standards of architectural beauty. A case in point is Chartres Cathedral, about 90 kilometres southwest of Paris. Its west façade was originally dominated by nearly symmetrical towers built in the 12th century. When the north spire was destroyed by lightning in 1506, it was rebuilt taller and in a more elaborate style. This striking asymmetry makes the cathedral a moving document in which one can read the passage of time, the forces of history and the acts of God the building has sustained.

The historical mutability of Gothic cathedrals raises complex questions for modern restorers. In the early 20th century, art historian Alois Riegl struggled with this problem when the Austrian government sought his advice on restoring St. Stephen’s Cathedral in Vienna. “Preservation should not aim at stasis,” Riegl finally declared, “but ought to permit the monuments to submit to incessant transformation and steady decay.”

Today, when digital images can elevate a building into a powerful and universally recognized national symbol, the reflex to answer catastrophe by building a perfect facsimile is difficult to resist. In the aftermath of 9/11, many Americans favoured replacing the Twin Towers with literal copies. Mixing aggressive national pride with a heavy dose of nostalgia, advocates called for the towers to be reconstructed just as they were before (or “maybe a storey taller,” allowed Donald Trump, who spoke out for the idea). The proposal eventually faded, as technical challenges and political infighting delayed the World Trade Center’s rebuilding.

Recent architectural preservation work shows that more enlightened options are possible. An instructive case is Berlin’s Neues Museum, built in the mid-19th century and substantially damaged by Second World War bombs. The literal reconstruction advocated by many traditionalists would have come across as false. Instead, a team led by British architect David Chipperfield meticulously preserved what remained of the building (fragments that included bullet holes and other traces of violence) and added a visually distinct yet deeply sympathetic modern structure. Mr. Chipperfield’s award-winning renovation honestly exhibited the history to which the building itself had been subject. In so doing, it elegantly and critically honoured the past while reinventing the museum as a living contemporary structure.

It is too soon to say whether such an approach would be suitable at Notre-Dame. But as Parisians take stock of the fire damage, they should take a broad view of what “rebuilding” might mean. A monument as tough and sophisticated as Notre-Dame can always accommodate creative and historically intelligent reinterpretation. Sixty-six minutes: The frantic race to save Notre-Dame
April 17, 2019 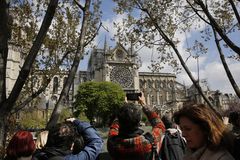 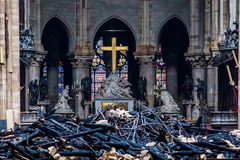