On Wednesday morning, a small group of protesters calling themselves the “Cuzzins for Wet’suwet’en” erected a makeshift barricade at a CN Rail crossing in Edmonton, joining similar blockades in other parts of the country. By midday, an even smaller group of counterprotesters converged on the site and dismantled the barricade, carrying its pieces off in a pickup truck.

Neither group was strictly speaking acting either inside or outside the law. No court injunction had been issued against the protesters at the time the counterprotesters moved in; the latter committed no violence against the former. And yet it is plainly contrary to the norms of a society governed by law for private individuals either to forcibly block rail lines or to forcibly prevent others from blocking them.

No bloodshed resulted in this case, but it’s not hard to imagine how it might have had the same thing been attempted against, say, the Mohawks blocking trains at Tyendinaga, Ont., and Kahnawake, Que.

That did not stop a number of the louder advocates of the “rule of law” in the current crisis, including the former minister of justice and current Conservative leadership candidate Peter MacKay (in a since-deleted tweet), from hailing the pickup-truck vigilantes for quite literally taking the law into their own hands. For their part, the leaders of a protest explicitly rejecting police authority over the Wet’suwet’en or, presumably, themselves were heard complaining that the police were “doing nothing” to protect them.

It would appear that both sides are in need of a little refresher course in the rule of law, a defining characteristic of which is that it applies equally to all. On the left, the crisis has brought forth a flurry of essays on the theme of the rule of law as instrument of colonialist oppression, blaming it for everything from residential schools to the killing of Dudley George.

But the merits of the rule of law, as a principle of government, are distinct from those of any particular law, or its application. The rule of law is also represented by the string of landmark Supreme Court rulings – Calder, Sparrow, Haida Nation, Tsilhqot’in, Delgamuukw, to name only a few – that have advanced Indigenous rights, as well as the constitutional documents going back to the Royal Proclamation of 1763 on which they are based. If you want the law’s protection, you also have to accept the law’s authority.

But fuzziness on the rule of law would appear to be even more prevalent among its self-styled defenders on the right. I don’t just mean their tendency to prefer that it be selectively applied, depending on whether they sympathize with the aims of those defying it, a trait they share with their left-wing counterparts. I mean also their cramped understanding of the rule of law’s foundations, as seen in the widespread demands for immediate police action to dismantle the barricades – as if the rule of law depended on no more than rules and law.

For as much as those desiring the law’s protection must accept its authority, so those who insist on the law’s enforcement must accept its limits. The rule of law does not consist only in legal texts or the courts and police that apply it. It is as much made up of the willingness of members of the public to abide by it.

It cannot simply be enforced upon an unwilling population, and especially not upon a section of the population that feels itself set apart from the main, notably by race or ethnicity, where the issue can quickly spread beyond the merits of any particular law to the authority of those who drafted it.

For a law to have any meaningful chance of enforcement, it must enjoy the support or at least acquiescence of a substantial majority, whether of the population or sub-population. Without such consensus, all that will be achieved is to breed disrespect for the law – see: prohibition, past and present – or, worse, wholesale alienation of the minority from the majority.

That is what is at risk in the current situation, should the demands for police or even military intervention be heeded: not just violence, as at Oka or Ipperwash, or the near-instantaneous replacement of one barricade with another, but the lasting estrangement of Indigenous and non-Indigenous Canadians.

The rule of law, in short, cannot be divorced from its political-cultural underpinnings. The ways in which the legal and political spheres inform each other are often overlooked. At the time of the secession reference, for example, a great many voices, inside Quebec and out, denounced any attempt to bring the secession debate (until then dominated by airy separatist claims of a right to secede unilaterally) within the rule of law as futile or even dangerous. Secession, they insisted, cannot be considered as a legal question; it is entirely political. And then the clincher: What are you going to do, send in the army?

To which the answer was: Who needs an army? What encouraged the people of Quebec to accept the Supreme Court’s ruling, and its later codification in the Clarity Act, was not the threat of force, but the desire of most Quebeckers to live within a law-based state.

Whatever the pretenses of its nationalists, Quebec is in most respects a modern North American society, much like any other: bourgeois, mortgage-holding and above all law-abiding. Divided as they may be on the question of independence, the vast majority of Quebeckers are simply not interested in revolutionary adventures.

The same cannot be said with certainty of many First Nations. The conditions of life on too many reserves are so deplorable, the rate of improvement so slow, as to leave an important section of their people open to persuasion that they have nothing to lose – that their interests are not necessarily best safeguarded within the law but may require defying it, or indeed that Canadian law does not apply to them. For now, that section is probably a small minority; the minority within that minority willing to use violence, smaller still. But that could change. And a confrontation with the police – not only at one point on the tracks, but at multiple points, across the country – would be the surest way to change it.

It is human nature, under stress, to choose sides: an “attack,” as it might be perceived, on some members of a community can all too easily come to be seen as an attack on all. The differences that might once have divided the community are set aside in the presence of an external “threat," the moderates closing ranks with the radicals.

By contrast, patience on the part of the authorities – not capitulation, but patience, goodwill and, where possible, negotiation – is likely to maintain the support of the larger section of Indigenous opinion. This places a similar constraint on their antagonists on the barricades: In the battle for the middle ground, whichever side appears the most reasonable has the best chance of winning.

That estimation can evolve with time and circumstances. As the consequences of the blockades become more evident, as much for Indigenous Canadians as for others, the pressure on the protesters to compromise will increase. At the same time, the case for intervention, should it come to that, will become more persuasive – especially from a government that has established its bona fides as a good-faith negotiating partner, unwilling to use force except in extremis.

I understand the fear that failing to intervene will invite further recourse to the blockade and other extralegal tactics by opponents of resource extraction, notably with regard to the Trans Mountain pipeline and Frontier oil sands mine project. But the risk to the rule of law from a reckless or premature use of force, and the setback to relations with Indigenous communities that this would entail, is in my view even greater.

The vulnerability of Canadian infrastructure to activist hijacking may be annoying, and it may be frustrating, but it is a reality. The tendency of so many conservatives to wish away what is unpleasant to behold, indulging instead in wild fantasies of what is possible by enforcement – the border-crosser issue is another example – is one of many pathologies currently afflicting the movement. So is a taste for inflammatory rhetoric and needless, almost reflexive polarization – always dangerous, but positively toxic when issues of race are engaged.

The Liberal government may be fairly criticized for helping to create the current situation, or for being slow to resolve it. But it is at least not acting in such a way as to make it vastly worse. Can Conservatives claim the same? 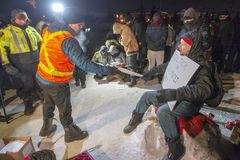