Mauro Chiesa has worked on project finance around the world for many banks, including the World Bank. Harry Swain chaired the Joint Review Panel on Site C and is a former deputy minister of Industry Canada. Mike Harcourt is a former premier of B.C. and former mayor of Vancouver.

Here’s an ineluctable law of nature: Project costs escalate during construction. But still, there are limits around what people should accept. For B.C.‘s Site C dam, the costs have gone from $3.5-billion, which was the estimate when the project was first touted, to the $6.9-billion quoted when the project underwent public review, to the official $10.7-billion price tag that hung until very recently. Since then, BC Hydro has discovered nasty geotechnical conditions under the powerhouse and spillways, and says their cost and schedule estimates are so broken it will take them until the fall just to produce new ones.

The last time costs got away from BC Hydro, the NDP government layered on a Project Assurance Board to keep track. Clearly, its members have not done their jobs, not that their names – nor any reports – have ever been released to the public. On July 31, Bruce Ralston, the province’s Minister of Energy, Mines and Petroleum Resources and the man in charge of Site C, appointed Peter Milburn, a former deputy minister of finance whose original training was in engineering, to oversee the overseers and to report back in the fall. Under media questioning, however, Mr. Ralston avoided committing to making public any of Mr. Milburn’s reports.

So, what’s the problem? BC Hydro says it discovered some anomalies in January, confirmed them in March after some more drilling – and has been studiously quiet about just what those problems are. It was, of course, a terrible surprise and had nothing to do with the competence of a corporation that hasn’t built a major dam in 40 years.

But was it really a surprise? Back in 2018, a hugely experienced dam engineer named Harvey Elwin said – in a sworn court statement for the West Moberly First Nation – that he’d never seen such appalling foundation conditions nor such secrecy on the part of project proponents. You can bet your boots that every word of his statement was parsed in the corridors of BC Hydro. They knew there were problems years ago. Either they never told the government, or the government did not want to ask, or the Project Assurance Board decided to hope the problem would go away.

BC Hydro blamed all this on COVID-19. But the problem has been staring the utility in the face for years. Its current (and late) reports to the BC Utilities Commission cover 2019 and the first quarter of 2020. Ignoring the novelty of blaming a piece of Pleistocene-era geology for a 21st-century problem, only the final two weeks of the 65 weeks covered by the report overlapped with the COVID-19 lockdown. In 1957, a 15-year-old bridge on the Alaska Highway collapsed a few miles downstream when a landslide in construction-softened clay dislodged the northern cable abutment, so this is nothing new for government.

Going forward, BC Hydro says it will concentrate on getting the diversion tunnels finished so the dam site can be dewatered while it figures out what the new costs will be. River diversion will take place on schedule, but project completion will be delayed by a year at a cost neither calculated nor confessed. They will apparently spend the summer costing out various alternatives for fixing a dam that’s being built on the geological equivalent of billiard balls.

BC Hydro has consumed all of the project’s contingency budget five years before project completion. It will not complete the project for the promised $6.9-, sorry $7.9-, sorry $8.3-, sorry $10.7-billion. At least they have pushed off the date when Site C becomes part of the rate base, to be paid off by all of us taxpayers, until after the next two elections.

But a fundamental problem even nastier than unco-operative geology still looms: the fact that even by 2025, there will be no demand for the power Site C produces. Its cost will likely be north of $120 per megawatt hour (MWh) – even more than the $118/MWh residential consumers paid last year, and more than the very high $87/MWh paid last year for power from Independent Power Producers. Couple that with the concessionary $54/MWh rates promised to the liquefied natural gas industry, and residential consumers are in for a terrific shock. And as the price rises, less will be consumed. This is the elasticity of demand: a snake that eats its own tail.

Eventually, we’ll need the power. But demand has been flat for 12 years, and we have an enormous surplus: around 70 TWh of supply versus 51 TWh of demand, and that doesn’t count the large quantity available as our rolling 10-year right under the Columbia River Treaty at, typically, less than $30/MWh. Even the most optimistic projections of electric vehicle demand or new industrial load will not fill that gap for at least 20 years. Timing is everything when it comes to investments.

In 2017, the NDP government decided, against much evidence, that the B.C. Liberals had succeeded in pushing the project past the point of no return. They now own this project, period. It’s time for a serious, objective, swift, experienced and professional review – not the narrowly circumscribed predetermined review that an embarrassed BC Utilities Commission was obliged to undertake in 2017. It’s still not too late. 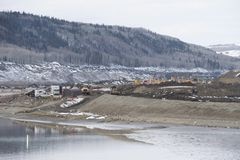