If you managed to stay awake until the end of Tuesday night’s Democratic presidential debate in Iowa, you were probably left feeling you’d been robbed of two hours of your life that might have been better spent cleaning your oven or watching This is Us.

Not only were there no candidates of colour on stage, the “final six” included an insufferable billionaire not named Michael Bloomberg (Tom Steyer) and a trio of 70-somethings who made Republican President Donald Trump look contemporary by comparison.

The main event had been billed as the clash of the lefties – the moment when Massachusetts Senator Elizabeth Warren and Vermont Senator Bernie Sanders would finally drop the gloves in the battle for dominance among progressive Democrats. With barely two weeks before the Feb. 3 Iowa caucuses, each has to conquer the other’s supporters to win the nomination.

What Americans got on Tuesday night, in the words of The Daily Show host Trevor Noah, looked a lot like “an old couple [fighting] in a diner.” Ms. Warren tried to counter doubts about her electability by pointing out that, unlike the men on stage, she had never lost an election. Mr. Sanders seemed to miss her point entirely. But what were you expecting from someone who just told The New York Times editorial board that he was unfamiliar with the term “cancel culture.”

“The only person on this stage who has beaten an incumbent Republican in the past 30 years is me,” Ms. Warren insisted, leaving out the part about her winning only 54 per cent of the popular vote to defeat Scott Brown in 2012, in the second-most Democratic state in the country during a presidential election year that saw Barack Obama easily returned to power.

What might have ensued was a discussion about whether Ms. Warren can defeat Mr. Trump in states that will decide the 2020 election, such as Florida or Ohio. Instead, there was a bizarre exchange between Mr. Sanders and Ms. Warren over the definition of “30 years.”

Mr. Sanders missed a chance to highlight Ms. Warren’s seemingly weak appeal among working-class voters. Maybe that was because, just prior to the debate, Ms. Warren complained that Mr. Sanders had been “sending his volunteers out to trash me” with a script insisting the Massachusetts senator appealed mainly to “highly educated, more affluent people.”

Mr. Sanders had also been on the defensive over Ms. Warren’s contention that he had told her privately that he did not think a woman could win the White House. Mr. Sanders denied saying that, or at least not in the way Ms. Warren said he said it.

Mr. Sanders and Ms. Warren also clashed over the new U.S.-Mexico-Canada Agreement that the Democratic-led House of Representatives approved last month. Ms. Warren plans to vote for the USMCA when it reaches the Senate; Mr. Sanders will not. True to form, he said he was “sick and tired” of CEO-negotiated trade deals.

There wasn’t much that Mr. Sanders didn’t seem sick and tired of on Tuesday night, starting with all the “waste and profiteering” in the U.S. health-care system. But his plan to outlaw private health insurance and introduce a single-payer public system similar to Canada’s, at a cost in the trillions, has moderate Democrats frightened to death about a Sanders-led ticket.

“This debate isn’t real,” Minnesota Senator Amy Klobuchar said of Mr. Sanders’s Medicare for All proposal. “I was in Vegas the other day and someone said: ‘Don’t put your chips on a number on the wheel that isn’t even on the wheel.’”

Ms. Klobuchar was the most sensible voice on stage, though she trails in the Iowa polls. The current front-runner, former vice-president Joe Biden, seemed bored, as if he had grown weary of having to once again make the case that no one is better prepared for the White House than him. Pete Buttigieg, former mayor of South Bend, Ind., whose lead in Iowa has faded, spent the debate mostly on the sidelines. When he did intervene, particularly during the discussion about how to handle the current crisis with Iran, he played up his previous military service in self-congratulatory fashion.

Mr. Biden had to apologize once again for his 2002 Senate vote authorizing the Iraq war. But the prospect of any of the others on stage (Ms. Klobuchar excepted) running to become commander-in-chief should have helped to concentrate more than a few Democratic minds. No one who thinks Mr. Trump must go can, however, be happy with the state of this race. 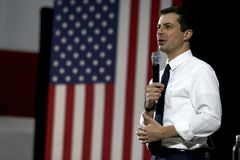 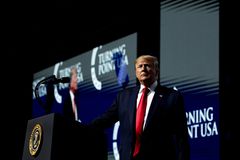 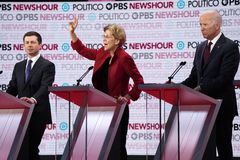