Had it not been for President Donald Trump’s most toxic tweet yet, inviting four progressive congresswomen of colour to “go back” whence they came, the big story in Washington this week would have been about an internal Democratic poll showing the same four women scaring off white voters in the very swing states the party needs to win in 2020.

The poll was obtained by Axios, which published its results on Sunday, the same day Mr. Trump sent his tweet attacking the four congresswomen known as The Squad: Alexandria Ocasio-Cortez, Ayanna Pressley, Rashida Tlaib and Ilhan Omar. The debate over whether the President’s tweet proved that he is a racist overtook the news cycle, culminating in Tuesday’s adoption of a House of Representatives resolution condemning his remarks.

Only four House Republicans voted in favour of the resolution, compared with all 235 Democrats present for the vote. As such, the vote was more of a vindication for Mr. Trump, who warned members of his party not to show “weakness” by siding with Democrats, than a repudiation. It proved that the President controls his party to a degree no Democratic politician can dream of.

The only Republicans who dare break with Mr. Trump now are blue-state governors such as Charlie Baker of Massachusetts, who called the President’s comments “shameful” and “racist,” or the few remaining swing-district members of Congress who need to rally centrist voters to win re-election in 2020. Most other Republican politicians just try to keep their heads down.

While this may seem cowardly on their part, most Republicans have come to understand that challenging Mr. Trump now is a losing game. Best to live to fight another day than to face the wrath of a President who has shown he will stop at nothing to eviscerate his critics in either party. Mr. Trump may yet meet his Waterloo one day – just not likely at the hands of his foes.

That’s what AOC Plus Three, as The Squad is also known, still doesn’t get. The four are so caught up in their own agendas that they only end up advancing Mr. Trump’s. Out of naiveté or sheer stubbornness, they fail to appreciate that most Americans do not view their country through the lens of racial discrimination and are turned off by politicians who do. That may seem like a double standard, given Mr. Trump’s racial taunts, but it is also a fact of U.S. political life.

Former president Barack Obama was fond of quoting Martin Luther King Jr., who said: “The arc of the moral universe is long, but it bends toward justice.” Mr. Obama understood Dr. King’s words to mean that, while racial equality remains an aspirational goal, U.S. society has moved indisputably in the right direction. Mr. Obama’s election in 2008 was proof of that.

The Squad casts aspersions on that idea with a smugness that betrays its immaturity. Instead of idolizing House Speaker Nancy Pelosi, who has done more to advance civil rights and the interests of racialized Americans than perhaps anyone in Congress, Alexandria Ocasio-Cortez casts her in with the rest of the entrenched classes in Washington as an obstacle to real progress.

Where was Ms. Ocasio-Cortez when Ms. Pelosi was fighting tooth and nail to get Mr. Obama’s Affordable Care Act through Congress in 2010? “We will go through the gate," Ms. Pelosi vowed then. "If the gate is closed, we will go over the fence. If the fence is too high, we will pole vault in. If that doesn’t work, we will parachute in. But we are going to get health-care reform passed.”

Mr. Obama’s health-care reform materially improved the lives of millions of African-Americans and Hispanics by financing an expansion of Medicaid and by subsidizing private-insurance premiums. It’s far from perfect, and it’s the product of countless compromises. But in a political system that makes legislating a gruelling exercise, it was a colossal achievement. The Squad, meanwhile, wouldn’t be able to get a bill through Congress if its members lives depended on it.

No wonder Mr. Trump seeks to elevate AOC Plus Three as the face of the Democratic Party. Ms. Pelosi is dangerous to him, as she showed in last fall’s midterm congressional elections, when Democrats took back the House by winning a slew of swing districts the GOP had taken in 2016. But The Squad, and what it stands for, is anathema to voters in those same districts.

The internal Democratic poll obtained by Axios showed that 74 per cent of white voters with two years of college or less knew who Ms. Ocasio-Cortez was, an astonishing level of name recognition for a first-term congresswoman. But only 22 per cent viewed her favourably.

Mr. Trump did not need to see this poll before he let loose on Twitter with his repulsive remarks. He, like Ms. Pelosi, already knew that The Squad is his ticket to re-election. 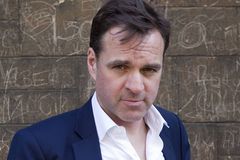 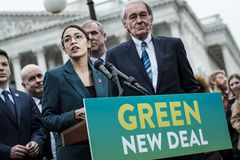 Opinion
The Democrats are becoming the women’s party
January 8, 2019 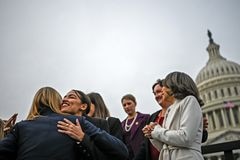