Philip Slayton’s latest book is How To Be Good: The Struggle Between Law and Ethics.

There’s been a tempest in a teapot over access to Supreme Court of Canada documents. The Globe recently reported that last year the court placed a 50-year embargo on files that reveal judges’ deliberations. A front-page story trumpeted, “Historians, lawyers and political scientists react to embargo with shock, bafflement, resigned acceptance.” Subsequent articles revealed Court attempts since 2005 to edit judges’ files, and reported querulous comments on the issue by a handful of retired SCC judges. An editorial accused the Supreme Court of “hiding from history” and cultivating “an air of pomp and mystery.” Shock, bafflement, and resigned acceptance exist (in some quarters) apparently because the embargo is believed to hinder understanding of the Court’s “secret inner workings.”

But apart from a few “historians, lawyers and political scientists” with specialized interests, why would anyone care about the embargo? It won’t interfere in a significant way with public understanding of what’s happening at the Supreme Court. Three other things do that: a judicial culture that values detachment from the wider world; failure of the media to report comprehensively on the court’s work; and a Canadian tradition of excessive deference to authority.

In the United States, judges of the Supreme Court are public personalities. Some are household names. They go on television and even the stage (Justice Ruth Bader Ginsburg appeared in a 2016 production of the Washington National Opera). Most of all, they write books. In 2012, the authoritative SCOTUSblog listed 353 books written by SCOTUS justices, living and dead. The literary output of judges of the Canadian Supreme Court (living and dead) is almost non-existent (here I have to mention former Chief Justice Beverley McLachlin’s just-published mystery novel, Full Disclosure). Whether this is from lack of interest, excessive reticence or stems from some deep-seated feeling about an elusive but sacred constitutional principle, I cannot say, but it’s not a good thing. It’s part of that detachment from the wider world. It’s a failure to connect.

Official law reports, televised court proceedings on CPAC and plain-language summaries of rulings don’t fill the void. These mean nothing to the ordinary citizen. Five years ago, in March, 2013, The Globe editorialized: “The late Supreme Court judge John Sopinka said judges don’t need to be monks. Heck, even monks write books… As public officials, they have a great deal to contribute to demystifying the court and the law. Whatever the reasons for reticence on the Supreme Court, the silence comes at an enormous cost.” Nothing has changed.

Don’t look to the media to break that costly silence. Considerable and rare skill is required to understand difficult legal concepts and decisions and report on them in a way that is intelligible and interesting to laypeople. Media outlets will not commit ever-scarcer resources to this work.

It doesn’t have to be that way. The United States Supreme Court is followed intensely, even obsessively, and skillfully, by the American media. The same is true of the coverage of final courts of appeal in several smaller countries, for example, the British Supreme Court, the Supreme Court of Israel and the Constitutional Court of South Africa.

And then there’s the Canadian public, comfortably complacent about being kept in the dark. Canadians are preternaturally respectful of those with position and power. We are content to hold Supreme Court justices in awe from a distance, even if we’re not quite sure what they’re up to. After all, they’re judges of the Supreme Court of Canada and sometimes wear robes trimmed with ermine.

In 1980, Edgar Z. Friedenberg, an American teaching at Dalhousie University in Halifax, published a prescient book called Deference to Authority: The Case of Canada. Canadians, he noted, have no tradition of identifying government as the source of oppression. The enjoyment of conflict is not a part of the Canadian tradition. The habit of deference is ingrained. Perhaps that helps make our kingdom peaceable. But it’s not always a good thing.

It’s not the embargo we have to fear. What we need to worry about are Supreme Court judges who won’t connect, inadequate media coverage of what they do, and a public that couldn’t care less.

Globe editorial: Supreme Court document embargo is too long by half
May 15, 2018 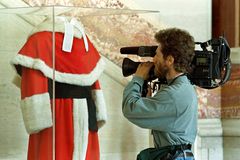 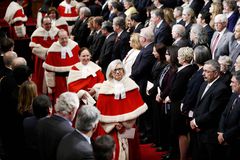