After my second child was born, my anxiety hit the roof; balancing the needs of a newborn and a spirited toddler was so much harder than I imagined. But my town’s Parent Link Centre regularly gave me the support to make it to bedtime each day. Now the tables are turned, and that centre’s employees need the support as they polish off the paperwork that will determine their future. While families such as mine wait to learn the fate of programs that have become our lifelines, the United Conservative Party government plays a game even children would suspect is rigged.

Since 2007, Alberta’s PLCs have supported families with children age 6 and under. The PLC network helps more than 107,000 Albertans a year and has grown from 22 centres to 59 centres across the province. Their programming is free and includes positive parenting education, developmental screenings, early literacy supports and play spaces. These services have made me a better parent, and I’ve watched my children flourish through them.

In early November, 300 child-related programs across the province, PLCs included, were told that the grants that largely covered their operations would end on March 31, 2020. They have until a revised deadline of Jan. 20 to submit a labyrinthine Expression of Interest (EOI) in order to compete for a share of the $57-million budget. Note that this is 25-per-cent less than the $77-million previously earmarked for prevention and early intervention services.

In a widely read Medicine Hat News article, journalist Scott Schmidt asserts that “a lot of children are going to lose out simply because the director of their program’s expertise was in developing children,” not in navigating a process he describes as “terrifying.” The review is based on the Well-being and Resiliency Framework, a document created under the former New Democratic Party government and grounded in current research, with input from Indigenous elders. But I suspect the authors intended the framework to be a road map for service providers, not a gauntlet they have to run.

My husband has brought our kids to the “Hangin’ with Dad” playgroup almost every Saturday for five years, but the future of this cherished ritual is uncertain; Parent Link Centres as we know them will likely cease to exist. But the motivations for this review are far less clear. On Nov. 18, the UCP Minister of Children’s Services, Rebecca Schulz, told the Legislature that the intervention landscape is “patchwork” and called for more “consistency,” while mentioning the importance of “unique community needs.”

When questioned by NDP MLA Richard Feehan, Ms. Schulz pivoted to finances, arguing the review would keep taxpayer dollars from “going to things like community newsletters and system navigators.” I, for one, love the cost-efficient way my local newsletters support “unique community needs.” And system navigators can be critical to accessing public services; for instance, they are a key element of Jordan’s Principle, the federal legislation supporting First Nations health, social and educational needs.

In the Medicine Hat News, Ms. Schulz attempted to refute criticisms by the likes of Mr. Schmidt. “There are too many children in government care,” says Ms. Schulz, defending the changes. Indeed, research from organizations such as the Muttart Foundation and the First 2000 Days early childhood development network confirms this – no one is debating that Alberta must do better.

Instead, we are exposing the sleight of hand; to successfully bid for their share of the budget, providers are asked to include youth up to 18 years old in their services. But how will a budget reduced by 25 per cent cover expanded offerings without sacrificing quality? Systems navigators and newsletters can’t account for $20-million.

Ms. Schulz’s column is full of euphemisms: cuts become “consistencies,” and shrinking services become “simplifying the system.” Even my preschooler knows that anyone “reviewing” the cookie jar might just be raiding its contents when no one is looking.

Provincial intervention and support services have focused on children age 6 and under because those years are vital to future wellness and success. The Conference Board of Canada estimates that every dollar invested in bringing early childhood development to the Organisation for Economic Co-operation and Development (OECD) average yields close to $6 in economic benefits. A continuum of services to support youth up to 18 would be a fantastic addition to early childhood programs. But reducing funding while requiring bigger mandates is a rigged game that won’t help those who need it most.

Parent Link Centres are powerful in part because they are responsive to local needs. My local Cochrane PLC has groups for LGBTQ families such as mine, as well as for newcomers. Rural families get programs at more remote community centres. It is obvious that the staff have spent more than a decade deepening relationships and building trust with local families and children; there is no budget line that could capture the cost of losing those.

Between increased school fees, cancelled child-care subsidies and an end to $25-a-day child care, Albertan families need all the help we can get; instead, we’re fighting for the programs that should be fighting for us. 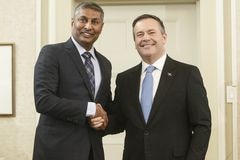