Dan Gardner is the author of the books Risk: The Science and Politics of Fear and Future Babble and a co-author, with Philip E. Tetlock, of Superforecasting: The Art and Science of Prediction.

A black hood covered the prisoner’s head. A deafening roar filled the air. “I didn’t know what was going on, where I was or who was doing what to me,” the prisoner later recalled.

Huddled in our homes, we can empathize. The news feels less like reality than an elaborate adaptation of that Stephen King novel about a plague. It’s not mere bewilderment we feel. It’s as if black hoods have been dropped over our heads and we have become that hapless, ignorant, frightened prisoner.

We are experiencing radical uncertainty. We are also discovering something about the psychology of uncertainty – something that prisoner knew intimately.

COVID-19 could spark a mental-health tsunami

Twenty-five years ago, Dutch researchers asked volunteers to endure electric shocks while their heart, respiration and perspiration rates – the physical signs of anxiety – were monitored. The volunteers were divided into two groups.

Measured in amps, the first group obviously got the worst of it. But measured in racing hearts, the second group clearly suffered more – because they never knew if the next shock would be mild or strong.

Monsters are scary. Not knowing if there is a monster is scarier.

Good writers know this. It’s why they mostly keep the monster off-screen.

The prisoner with the black hood was a suspected terrorist arrested in the early 1970s in Northern Ireland and subjected to a series of interrogation techniques by British soldiers. Along with hooding, noise and disorientation, he was subjected to sleep deprivation, stress positions, threats and humiliation. These techniques would become the infamous “stress and duress” method used by U.S. interrogators in the years after the 9/11 attacks.

When people think of torture, they usually imagine gruesome barbarities. But torture, at its core, is a psychological assault. The torturer wants to break the person, not the person’s body.

A basic psychological need we all share is to have a sense of control. Torturers know this, so they explicitly take control from their victims. “I decide what will happen to you,” they say. “I decide if you live or die.”

Torturers also know that knowledge is a form of control. People who know what is happening, why it’s happening and what will happen next have at least some sense of control. Snatch that from them and they have nothing.

So they hood or blindfold their victims. They move them without saying why or where they are going. They avoid routines and interrogate prisoners at randomly selected times. They shout unclear or nonsense orders that can’t be followed – “Flap your arms and fly!” – to heighten confusion.

The goal is to render the prisoner absolutely ignorant. Immersed in uncertainty, the prisoner feels he is drowning. It is an agony worse than any fist or club can inflict.

“The threat of coercion usually weakens or destroys resistance more effectively than coercion itself,” observes a CIA interrogation manual obtained by Baltimore Sun reporters in 1997. “The threat to inflict pain, for example, can trigger fears more damaging than the immediate sensation of pain.”

Scientists and philosophers tell us that uncertainty is everywhere, always, that it is an ineradicable fact of human existence. But that’s not how we experience it. When life rolls along in the ordinary way, it is mostly a series of daily routines. We feel we know what is happening, why it’s happening and what will happen next.

Occasionally, a surprise – a friend crashes a car, a reality-TV star becomes president – suggests that things are perhaps not as known and predictable as we feel they are. But that is disturbing to think about, so those of us who are neither scientists nor philosophers climb back under a warm blanket of certainty and comfortable routines.

But rarely – once a generation, if we’re lucky – something we know nothing about, something we never imagined, something seemingly capable of ending life as we know it appears with a terrible suddenness. It tears our warm blanket away, and we shiver naked in the cold of radical uncertainty.

In 1832, as cholera swept Europe, German poet Heinrich Heine wrote that it was “like the end of the world.” Some nights of late, after the news – and a third glass of wine – that description feels about right. And now we’re told the virus is likely to come in waves that could last months. How long will we have to huddle at home, wearing black hoods of uncertainty? “The truth is, we don’t know yet,” Prime Minister Justin Trudeau said Tuesday.

“Sustained long enough,” the CIA interrogation manual notes, “a strong feeling of anything vague or unknown induces regression.” Perhaps on our list of fears, beneath “biblical plague” and “Great Depression,” we should now add “fear itself.” It all feels hopeless.

But that feeling is misleading. What will come to pass is – of course – uncertain. But there is actually good reason to hope that while the worst of the epidemiological and economic crises lie ahead, the worst of the psychological crisis may already be behind us or will soon be. Anxiety may start to wane.

One reason for this is simply knowledge. It is kryptonite to uncertainty. And we – collectively and individually – are learning rapidly.

In 1832, cholera was new to Europe, and no one knew what it was, how it spread or how to treat victims. They were utterly in the dark. We are not. Our scientists already know vastly more about the coronavirus. Even ordinary people do.

Think back to one month ago. Epidemiologists and virologists aside, very few of us knew even the most basic facts about contagious diseases, let alone this virus. Now consider all we have learned in just four furious weeks. Infection and mortality rates. Immune responses. The toll of seasonal flu. How the virus spreads. How it kills. How to treat the ill. What does and does not work to slow its spread. Why and how we must “flatten the curve.”

The accumulation of knowledge is accelerating. As knowledge rises, uncertainty falls. We can expect anxiety to fall with it. This is why, if there are waves in this crisis, it’s a safe bet that the subsequent waves will be less frightening than the first.

We’ve seen this dynamic repeatedly with terrorism. A single atrocity in a population that has never experienced terrorism is devastating, yet when terrorism becomes frequent, or even endemic, as it was in Israel for so long, it also becomes familiar and loses the power to inflict uncertainty. It can still cause suffering. But it cannot turn people’s mental world upside down.

More fundamentally, we are likely at or near peak fear simply because what we fear has yet to be determined and revealed. We are like the woman in the horror movie slowly turning the door handle. There may be nothing on the other side. Or there may be a monster. This moment, the moment before revelation, is when hearts beat fastest.

With luck, there will be no monster on the other side of the door. But if there is?

“The materialization of the fear,” the CIA manual notes, “is likely to come as a relief.”

Yes, relief. The anticipation of being beaten, slashed, shocked or otherwise abused is so agonizing that to actually be beaten, slashed or shocked can bring a strange sort of relief.

Sooner or later, the uncertain future will become the certain present. Things may turn out better than we fear. Or they may be worse.

But whatever comes, the black hood will be lifted. We will feel relief. And we will move on. 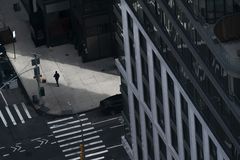 Opinion
Why companies need to prioritize employee mental health during the pandemic
March 25, 2020 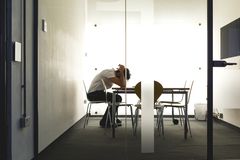